Compared to the other chart types, the box-and-whisker plot (also known as the box plot) is a bit more complicated. Before we can delve into an example of how it is used within Tableau Software, we have to explain the logic behind this type of view. After that, we’ll build an example.

Here is a box-and-whisker visual:

Figure 1: The box and whiskers.

The box represents the values between the first and third quartile (also known as the interquartile range=Q3 – Q1). The whiskers represent the distances between the lowest value to the first quartile and the fourth quartile to the highest value. Each quartile has a specific numeric value, determined from the data set.

Consider the numbers above as a very simple data set. We’ll illustrate how a minimum, Q1, the median, Q3, and the maximum are derived from them.

Things get a little more complicated when you start to consider outliers or data points that are not representative of the data set. For instance, what if the data set above had another number in the range like 287? That’s so far out of the normal set of data that it wouldn’t make sense to let it serve as the maximum.

Instead, it is an outlier, which is represented by a single dot. 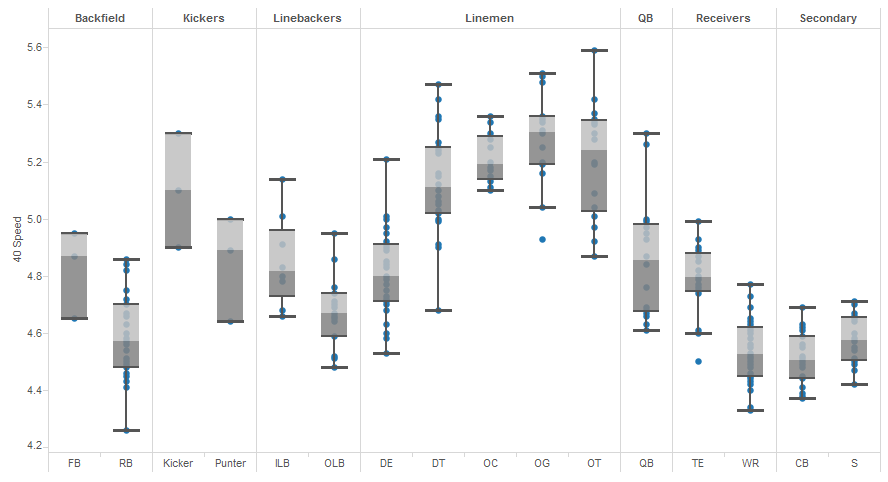 The plot above (Figure 2) is a great way to illustrate the effectiveness of the box-and-whisker plot. The visualization is a representation of the 40-yard dash times from the 2014 NFL Scouting Combine broken out by position. You can see the standard grouping of speed by each position in the box and the dispersion of widening scores in the whiskers.

In the guards (OG) and tight ends (TE), you can see the only two outliers on the plot. If you look at the upper whisker (i.e. the slower players) and the compare it to the lower whisker (i.e. the faster players), you can see that they are approximately the same size for those two positions. If the bottom whisker extended down to either one of those outliers, the lower whisker would be significantly longer than the upper whisker (or quartile). That is why that data point is an outlier.

Let’s click on one of the box-and-whiskers for more information: 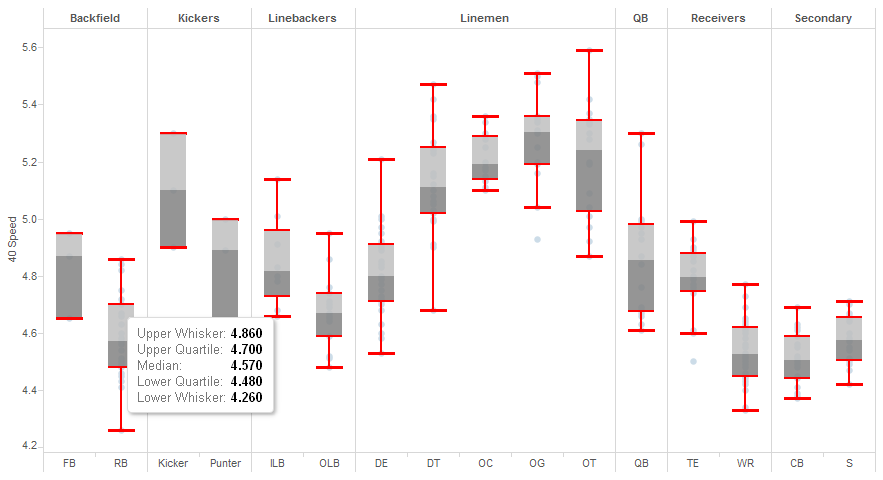 The box-and-whisker plot is a bit more complex than the other chart types. Let us know if you have any questions or need clarification on anything that we covered above.

Here is the complete list of chart types from the Show Me menu. Be sure to check back often as we continue to release new articles in each chart type in this sub-series.