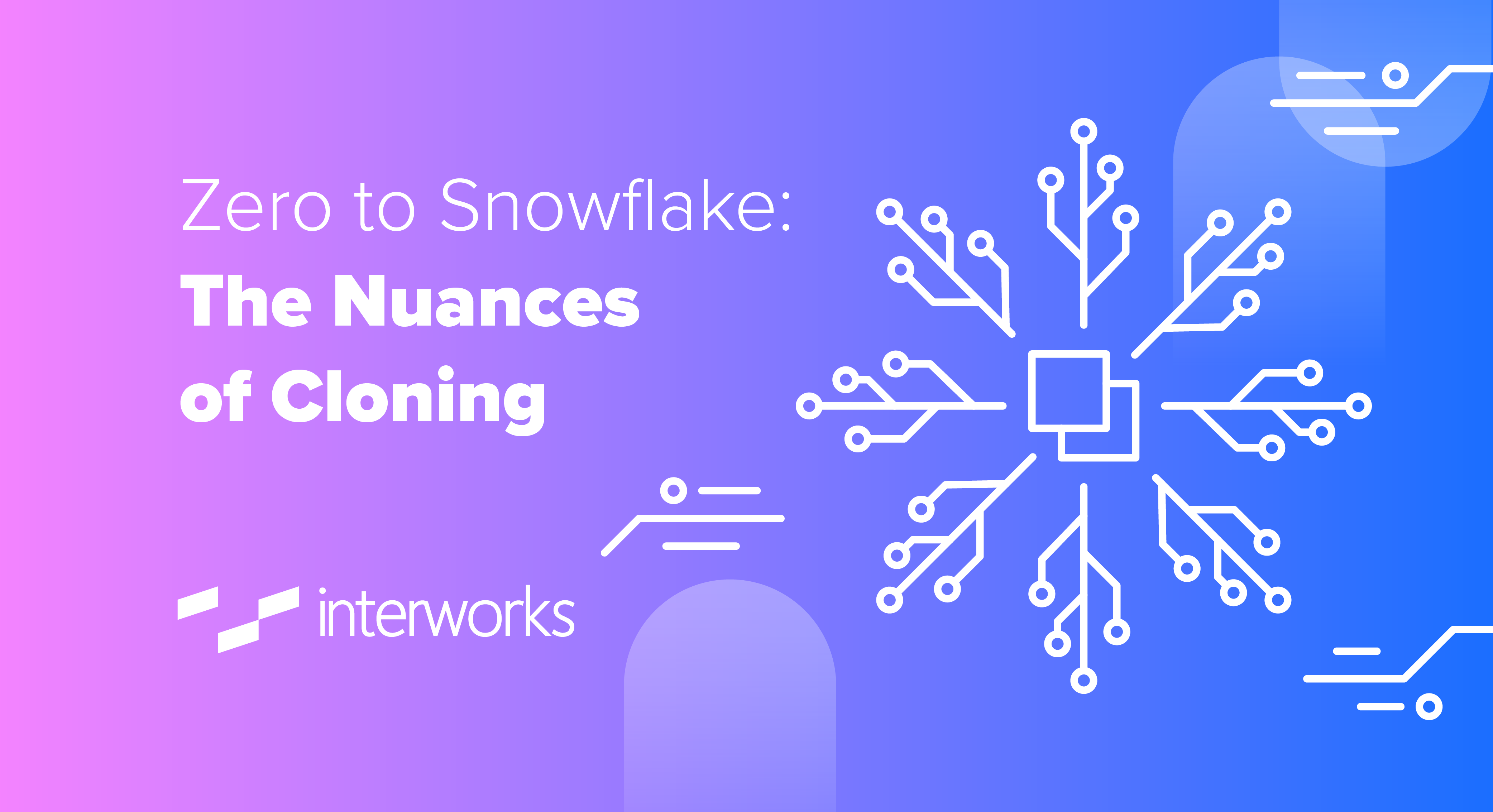 One of the fantastic features in Snowflake is the support of zero-copy cloning. This is the capability to duplicate an object while neither creating a physical copy nor adding any additional storage costs. This allows for much greater freedom in the environment as costs are kept low without limiting potential.

For databases, schemas, and tables, a clone does not contribute to the overall data storage for the object until operations are performed on the clone that modify existing data or add new data, such as:
– Creating a new, populated table in a cloned schema.
– Adding, deleting, or modifying rows in a cloned table.

Why Clone an Object?

There are plenty of reasons to clone an object not only in Snowflake but also in any data warehouse. Usually in the wild, I see most cloning taking place for one of the following three reasons:

Of course, this is not an exhaustive list of scenarios when a clone would be beneficial.

Which Objects Can Be Cloned?

Before we discuss how to clone an object, it is worth considering what objects can be cloned and any caveats that may exist. To begin, below is a list of all objects that can be cloned at the time of writing. An updated list can be retrieved from Snowflake’s Documentation on Cloning:

As you can see, I have divided these objects into two groups: Data Containment Objects and Data Configuration and Transformation Objects. This is due to how the cloning functionality varies for objects in each group.

Also, note that only permanent and transient tables support time travel with cloning (discussed below). Temporary tables can be cloned within a session, but time travel is not supported.

To clone an object, a single SQL statement is required:

This statement will create a new object by cloning an existing object. The above is a simplified version of the statement; the statement below contains the full syntax:

It is important to keep in mind that the clone is still a brand-new object. Whilst the metadata and data will be the same as the source object, the new clone will have its own history as far as time travel and data loading are concerned.

Another great feature in Snowflake is the Time Travel functionality, which is how Snowflake stores previous versions of an object for a set period of time and allows users to retrieve these versions at will (check out this detailed blog post on the Time Travel feature). For the objects in the Data Containment Objects group above, time travel can be leveraged during cloning. This results in clones of the objects as they existed at the required time, instead of how they currently exist.

This is achieved using the AT or BEFORE clauses, which supports specific timestamps, offsets from the current time or statement IDs to use as a reference. In each of these scenarios, Snowflake will return the state of the object as it existed directly at/before that timestamp, or directly following/before the completion of the statement with the corresponding statement ID.

This is achieved using the following SQL syntax:

For example, we could clone a table called MY_SOURCE_TABLE into a new table called MY_JAN20_TABLE specifically for January 2020 by cloning the table as it existed before midnight on 1st February 2020:

When cloning using time travel, there are four key points to note:

Child Objects in a Clone

When an object is cloned, its children will usually be cloned as well. The exceptions to this rule are:

These should not be confused with internal table stages, which are cloned alongside their parent table.

A Critical Note When Child Objects Are Cloned

When any form of internal stage is cloned (usually in the case of an internal table stage), it is vital to note that this stage will be empty. On a similar thread, cloned streams will also be empty and cloned pipes and tasks will by paused by default.

When a pipe is cloned, by default it will be paused. This is to avoid unnecessary data loading as a clone may not require additional data loading. This also allows the user to confirm the pipe will execute the correct action. This is especially important when the pipe specifies either the full namespace or the schema within its definition. This will be maintained and could potentially result in data being loaded into the wrong location.

For example, assume a pipe is defined as follows:

Regardless of how PIPE_A is cloned, its defining statement is clear and rigid. It will always load data from a specific stage and load it into a specific table.

Now, assume another pipe is defined as follows:

If PIPE_B is cloned, its new functionality will be determined by exactly how it was cloned. If the clone exists within the same database, say DATABASE_A, the cloned pipe will perform exactly the same functionality as the original and still load data into "DATABASE_A"."SCHEMA_A"."TABLE".

So there we have it—an overview of cloning and some of the nuances across objects. Whilst we have not worked towards a specific target in this post, I hope it has lifted the curtain on some of the finer details of cloning. If you have any specific questions on this or want to offer up your own use cases for cloning, I’d love to read about it in a comment below. Thanks for reading!