Tableau Like a Pro: The Tableau Keyboard Shortcut Cheat Sheet

Tableau is one of the fastest tools out there to turn questions and data into insights. Drafting, prototyping, data preparation and building visualisations can all be done by one person with one piece of software. Being able to think of a way to visualise data...

One of the questions that I’ve been getting a lot lately when I present on analytics is: how do you get good at Tableau? I’m going to give you as close to a blueprint as possible based on my own experiences to quickly build skills...

How to Build Mobile-Friendly Tableau Dashboards

Have you ever built a really cool dashboard and thought, “Man, this would be awesome to access from my phone while I’m on the go!” The world we live in today is a mobile one—we are all on the go and spending more time on...

In the last four blog posts in this series, we created an 18-step workflow that provides a hyper extract file. I’m going to test my set by building a view in Tableau Desktop. While I could just publish the flow and use an output file...

Images on your dashboard, combined with visual best practices, make a huge difference when it comes to the impact of your work. My years of experience as an analytics consultant in Australia have told me that dashboards are judged by stakeholders on four criteria: data,...

HAPPY BIRTHDAY TO US! We’re officially two years old. Thank you for being a part of our community for the past two years. We have some exciting updates to the show that we’ll implement in upcoming episodes, the first being our new panel format. Brad Fair...

Another Autumn another update from the good people at Tableau. Tableau 10.4 acts as the third major update of the software within the 2017 calendar year. Let’s have a look at the main new features of 10.4 on both Tableau Server and Tableau Desktop that...

Are you a Tableau Desktop user who is new to Tableau Server? Do you find yourself confounded by all of the thingamajigs and whatsits, and just want someone to tell you what you need to focus on? If so, then you want this post. In this...

Using the Data Interpreter in Tableau 9.2 to Recognize Sub Tables

I recently found a data set that was perfect for testing out the new Data Interpreter in Tableau 9.2. While discussions about Syrian refugees were ramping up, I sought out data about the situation, which led me to the UNHCR page dedicated to this crisis....

At the beginning of my career with InterWorks, I knew only a fraction of what I do now about the Tableau Desktop tool. One of my very first posts mentioned the new Mac connector in 8.2. Upon the release of Tableau 9.2, I’m back to...

Here at InterWorks, we’re all very excited about the latest release of Tableau Beta 9.0. A lot of us are playing around with the new features and are already benefitting from the advancements they bring. Today, I’m kicking off this blog series with a look at the user interface changes and improvements. 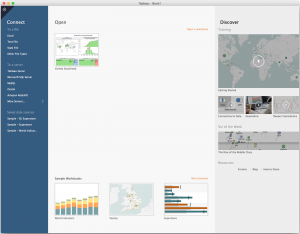 This is one of my longer blogs so I've added this contents so that you can jump to what you are interested in, otherwise please keep reading.

If you’ve had the opportunity to download Tableau v9 Beta 2, you’ll no doubt have realised that it’s pretty great. For all those who haven’t, get involved and start downloading!

In Tableau Desktop 9, there are some fantastic UI improvements that Tableau have made. The majority of it is increasing the usage of drag-and-drop and buttons rather than menus. This is a testament to the way Tableau listens to their customer base and makes the best decisions in each release. So, keep reading to find out some of the look and feel of Tableau v9 (Note: It’s a beta, and things may change before release).

It’s got a lovely, blue, fresh design, incorporating the Home screen from previous versions with the Connect to Data screen.

You will also notice the “Sheet, Thumbs, Data, Home” buttons  have been removed and a new “Tableau Logo” button added to the top-left. 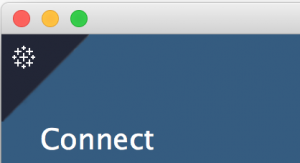 Click this and it flicks between the new Home screen and your last-used worksheet. On this new Home screen, you can Connect to Data, View Server Workbooks, Discover community workbooks and view the “Viz of the Day” from Tableau’s website. It’s a great change as, in my opinion, it simplifies the workflow.

The thumbnail view button now has a new home in the bottom-right of the Tableau app. Its size and position, I guess, denotes it importance. However, it’s still useful.

New connectors that I’ve spotted are SPSS .sav, SAS .sas7bdat, R .rda and R .rdata, MonetDB and SparkSQL. I’ll be blogging about the R connectors very soon, as it’ll be great to have an R script pulling data from Twitter, analysing it and then visualising in Tableau!

The “Go To Worksheet” button has disappeared!

But, you can relax. Tableau decided it was redundant, and you now use the sheet navigator at the bottom of the screen to go to a sheet. I personally prefer its simplification of the interface, as previous versions had too many ways to do something.

A new “Manage metadata” button has also been added. This opens a view of the fields/columns in your data, allowing you to rename, describe and change aliases in the data and split the data in a column. This feature is a great new addition for shaping your data in Tableau rather than an external app.

Split function: This gives you the ability to split a field/column into separate fields/columns based on a separator. For example, I have an ID field in a database that is stored “#01-16845”. The key of the row is really the 16845. So, let’s say I want to split the field on “-”. I can do this now with the Split function, giving me a new column containing “16845”. We’ll be talking more about these new data shaping tools (Split and Pivot) in a following blog, so keep an eye on the blog for updates.

Show Aliases button: If you’ve set any aliases against your data, you can switch them on and off in the data to check the underlying data - useful.

I’ve already mentioned the new position for the Thumbnails view button in the bottom-right and the removal of the navigation buttons in the top right, and you’ll see by doing that the workspace is that little bit bigger. In the end, the data is the star, and the user interface should blend into the background. I feel it does.

Data Source button: This is a shortcut for the old “right-click on the data source and then click Edit Data Source”, it’s another improvement to the workflow that potentially reduces the number of clicks to do things.

“Hide all sheets”. Yay!!! This one is in the right-click menu of a dashboard tab, and it does what it says on the tin - hides all the sheets used in that dashboard. There’s an Unhide all sheets too. 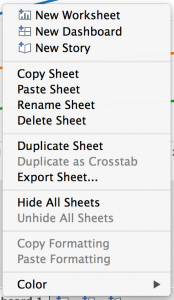 Sheet preview when building dashboards, hover over the sheet in the left navigator and Tableau now displays a thumbnail of the sheet. Great for finding those cryptically named sheets. (Sheet 1, Sheet 2 etc. all you non-namers.)

What’s that new icon on the right of the sheet tabs I hear you ask?!.

It’s the new “New Story” button. Again, one less click and less use of menus. This lower dependence on menus is great in OSX as the menu bar is always at the top of the screen rather than attached to the window as in Windows.

A few new features here; and the “Tableau Classic” map has been removed from the Map Options.
Out with the old altogether.

Hover over the map and the map toolbar is shown, the first button is a search tool allowing you to search for geographic locations around the globe.

Lasso tools have been improved in maps, there is now a circular and freeform polygon tool to select marks on a map.

Responsive tooltips: They appear as you move the mouse around marks. It looks and feels much quicker as there’s no need to hover over a mark, then wait and then read the tooltip. You can still choose the hover tooltips, though. The command buttons are hidden when using responsive and only appear when clicking on the mark -