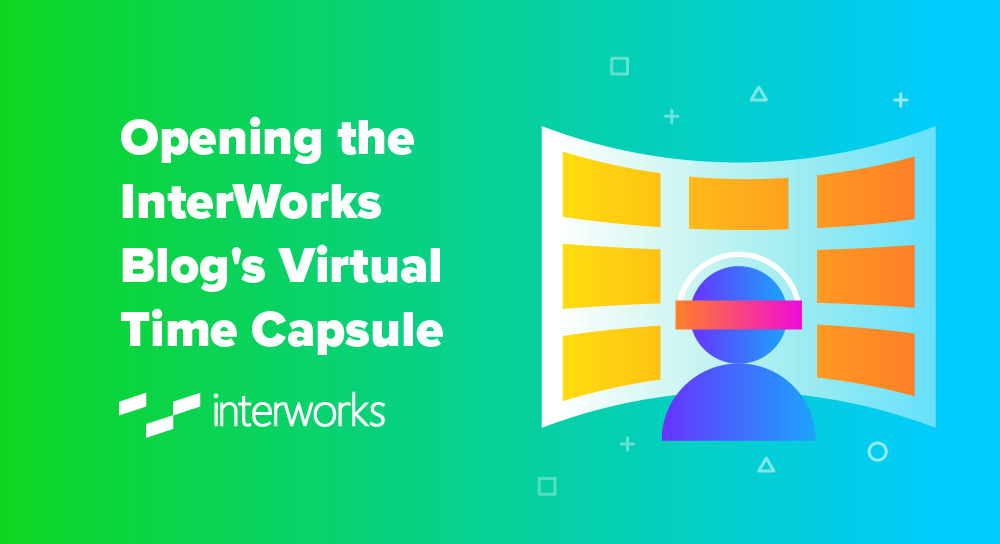 InterWorks is a company that’s been around for more than a quarter century. In the grand scheme of things, that could be argued as the blink of an eye. For instance, the oldest company in the world was Kongō Gumi Co., Ltd., which was founded in 578 CE and was fully independent until 2006. So, you know, a little longer than us.

For tech companies, though, hitting that 26-year mark is no small feat. We’ve seen quite a few changes over the course of our existence, so I thought I’d go back through some of our old blog posts and see what things were like when we were still in our virtual infancy. It’s quite a storied history, as I found out.

For a bit of background into the history of the company, InterWorks went from a one-man company, started in 1996 by CEO Behfar Jahanshahi, to the 250+ employee global data and tech consultancy you know today. The way that Behfar describes our origin story on the blog, as a human-centric endeavor, is actually one of the big reasons I applied here in the first place.

Our blog, specifically, was started over a decade later, with the first blog post being released on January 1, 2009 (though the date in the text lists the writing date as August 21, 2008). The post goes over how we were added to the Inc. 5000 list for 2008, a list we’ve found ourselves on many times since then due to our stable growth and solid work in the data field.

One of my favorite bits of InterWorks history is that we actually used to do a bit of mobile game development for Blackberry. One of the first projects I found mentioned on the blog was an official tie-in to the, how do you say, nearly universally panned Hoodwinked Too! Hood vs. Evil movie in 2011.

That actually wasn’t our only foray into the mobile game dev field. Also in 2011, we made one of the most popular Blackberry games on the market that year, Fightin’ Words:

Above: The Fightin’ Words icon

It’s safe to say that the app surpassed all expectations, hitting the top 5 list overall at the time. Unfortunately, I’ve yet to find a build that we kept, so Fightin’ Words will have to live on in our hearts.

I have to admit, I’m bending my own rules here a bit. In 2012, we became the first ever to achieve Tableau’s Gold Partner status. The announcement went up on a blog … Tableau’s blog. I know, I know, that’s not our blog, but we wrote the press release for them so I’m counting it.

It’s also worth including because becoming the first Gold Partner drastically changed InterWorks’ trajectory for the better. We became who we are today partially because of Tableau’s faith in us starting out, and we’re grateful for the opportunities that came because of it.

All right, enough with the sappy stuff. Back to the fun part.

A couple years later, in 2014, InterWorks went through a rebranding initiative that saw us swap from our old laser-disc-inspired logo to our sleek, multilevel brand that’s been our image ever since. We’ve explained the meaning behind our current brand before, if you’ve ever been curious:

Above: The original InterWorks logo

Above: The updated InterWorks logo

Personally, my first thought was that the new logo was supposed to be an abstract USS Enterprise from “Star Trek: The Original Series,” but I think that’s just a me thing.

That year also saw an exciting development for our home state of Oklahoma when Kevin Durant won the OKC Thunder’s first ever MVP (though bringing up Kevin Durant to Thunder fans now is a tenuous proposition, at best). At the time, we were right on the front lines cheering him on.

When we heard the news, we put together a viz showing that, even if you cooked the books, Kevin Durant was still the surefire MVP of the 2014 season. We also found ourselves supporting Durant and the Thunder in a more official capacity during that time. While Durant was giving his historic acceptance speech, we were in the room, making sure the media had internet access to live-report the whole thing:

Which, when you think about it, means that we were instrumental in the creation of an internet-wide meme. Now that’s a badge of honor we’ll wear with the utmost pride, I’m sure.

That year, we also celebrated hitting 1,000 posts on the InterWorks blog. Considering that I went through those first 1,000 posts to write this one, I can say with certainty that we grew and evolved quite a bit between the first and thousandth blog, both in terms of what we cover and the quality of our work, and we’ve continued to grow and evolve in the years since.

In 2016, we celebrated 20 years in operation with a surprise party for our Behfar (who just so happened to be named as one of Oklahoma’s most admired CEOs a few months before). In true InterWorks fashion, the party was a blowout, with InterWorkers from across the world coming in to celebrate two decades in business:

Above: Attendees from the 20th anniversary party

The blog nowadays is a solid mix of culture, data, IT, company news and more. You’re just as likely to come across a piece talking about a new software we’re adopting as you are a webinar replay. We try to make sure there’s a little of everything for everyone, so it’s worth taking a scroll through and seeing if anything tickles your fancy.

Oh, and just because I haven’t embedded enough links in this piece yet, here’s a special surprise article just for those of you who made it to the end.