Kevin Durant and the OKC Thunder Get the Assist from InterWorks

Kevin Durant and the OKC Thunder Get the Assist from InterWorks

What a wild few days for both Oklahoma basketball fans and our team of IT professionals.

The OKC Thunder contacted InterWorks late Friday afternoon with an urgent need to support a high-demand team media event. The OKC Thunder have their own capable IT staff, but this team is very busy preparing for all other aspects of the current playoff environment. This event would require an expert team, ready to architect the right solution and install without hesitation to support the high-demand requirements. 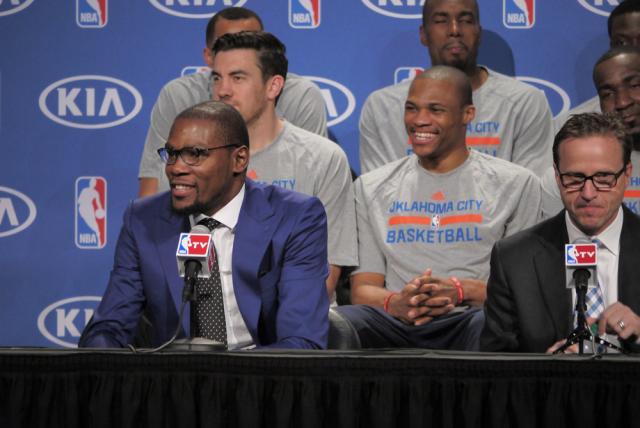 We didn’t have much information on the event, but it was assumed it would be related to the playoff series. We were told that the event would be held at their practice facility on Tuesday, and they’d need the entire 15,000 sq ft building, including basketball court, workout area and locker rooms, to be covered with rock-solid Wi-Fi access. The Thunder told us to expect 800-900 people for the event and assume 500+ would be on the network at any time. In addition, they required InterWorks to keep support technicians onsite in case there were issues throughout the event.

We kept quiet as asked and dove into the project. Then today, we heard the news …

Of course you need a rock-solid IT environment when all sports media will be showing up to your house! Announced by NBA on Tuesday morning, Kevin Durant of the Oklahoma City Thunder will receive his first MVP award.

Now we knew what we were up against. The requirements had not changed, and the stakes were as high as ever, but this news put the whole Thunder Wi-Fi project in a new light. At 3 p.m. Central Standard Time, the OKC Thunder’s entire practice facility had to be running a flawless wireless network.

Once we accepted the challenge of blanketing the Thunder’s practice facility with Wi-Fi, we went to work designing the right solution. The Thunder’s close partner, COX Cable, had already run a 100Mb fiber connection into the building, so we had a large bandwidth pipe with which to work. After considering all requirements and heat-mapping the facility on Monday, a Ruckus wireless solution was selected.

The solution came together quickly and survived rigorous testing prior to the event due to two factors: A great choice in partners (Ruckus and Dell) and significant experience working with these powerful tools.

If you know anything about InterWorks, we go to great lengths to hire the right people and work with all the right tools. When flawless execution is the only requirement in IT, people that know us will only call us. 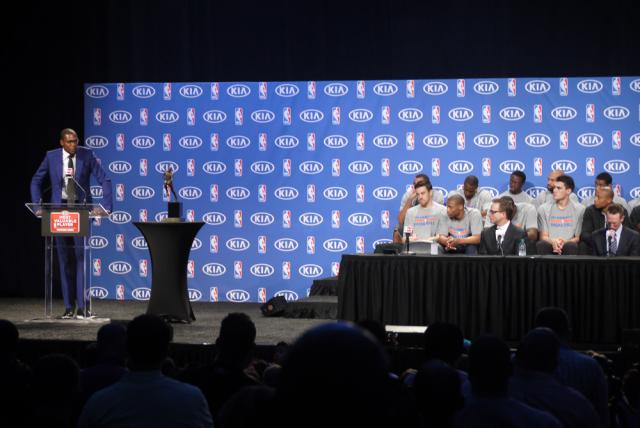 Above: Kevin Durant (far left), team and coaches during the press conference.

Just as expected, the event went perfectly. The team of InterWorks solution architects, made up of myself and Tuan Nguyen, worked tirelessly through the weekend and right up until the event. We had a great time on the project and loved the opportunity to shine while supporting our favorite team.

Of course, this is all very cool because it’s the OKC Thunder – but more than that, the Thunder have shown full confidence in InterWorks to handle this project. 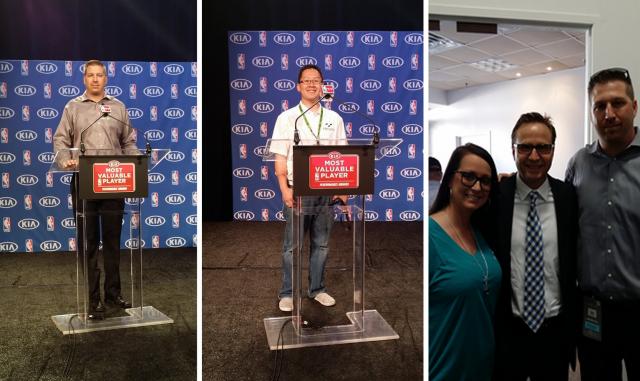 Above: The InterWorks team at the press conference.

Platforms Architect
Facebook
Twitter
Google+
LinkedIn
Kevin Durant and the OKC Thunder Get the Assist from InterWorks What a wild few days for both Oklahoma basketball fans and our team of IT professionals.  The OKC Thunder contacted InterWorks late ...
Mobile Security Topics – Highlights from a Recent Speaking Event Recently I was asked by a client to attend the annual Trucking Industry Defense Association (TIDA) in Las Vegas to speak about mobile ...