InterWorks
×
Contact Us
BACK TO TEAM
David Duncan
Experience Design Lead
Email
David is a designer with a passion for traveling and seeing the world. He has studied in various countries in an effort to broaden his mind and understand where the industry has been and where it is going.

In his spare time, he’s likely blogging about the design industry, playing tennis or gaming. Growing up in a household with video games, his earliest memories fall back to Nintendo and an 8-bit era. He always wanted to figure out not only how video games were created but why. This infatuation has ultimately influenced his love of great design.

He graduated from Oklahoma State University in 2011 with a degree in graphic design, a minor in studio art and an emphasis in Spanish. After that, he served as Creative Director for This Land Press and now brings his talents to InterWorks as an experience consultant. 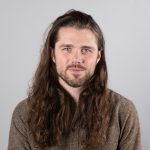