The Road to Tableau 2019.3: How InterWorks Influenced Server and Content Migration Features

The Road to Tableau 2019.3: How InterWorks Influenced Server and Content Migration Features 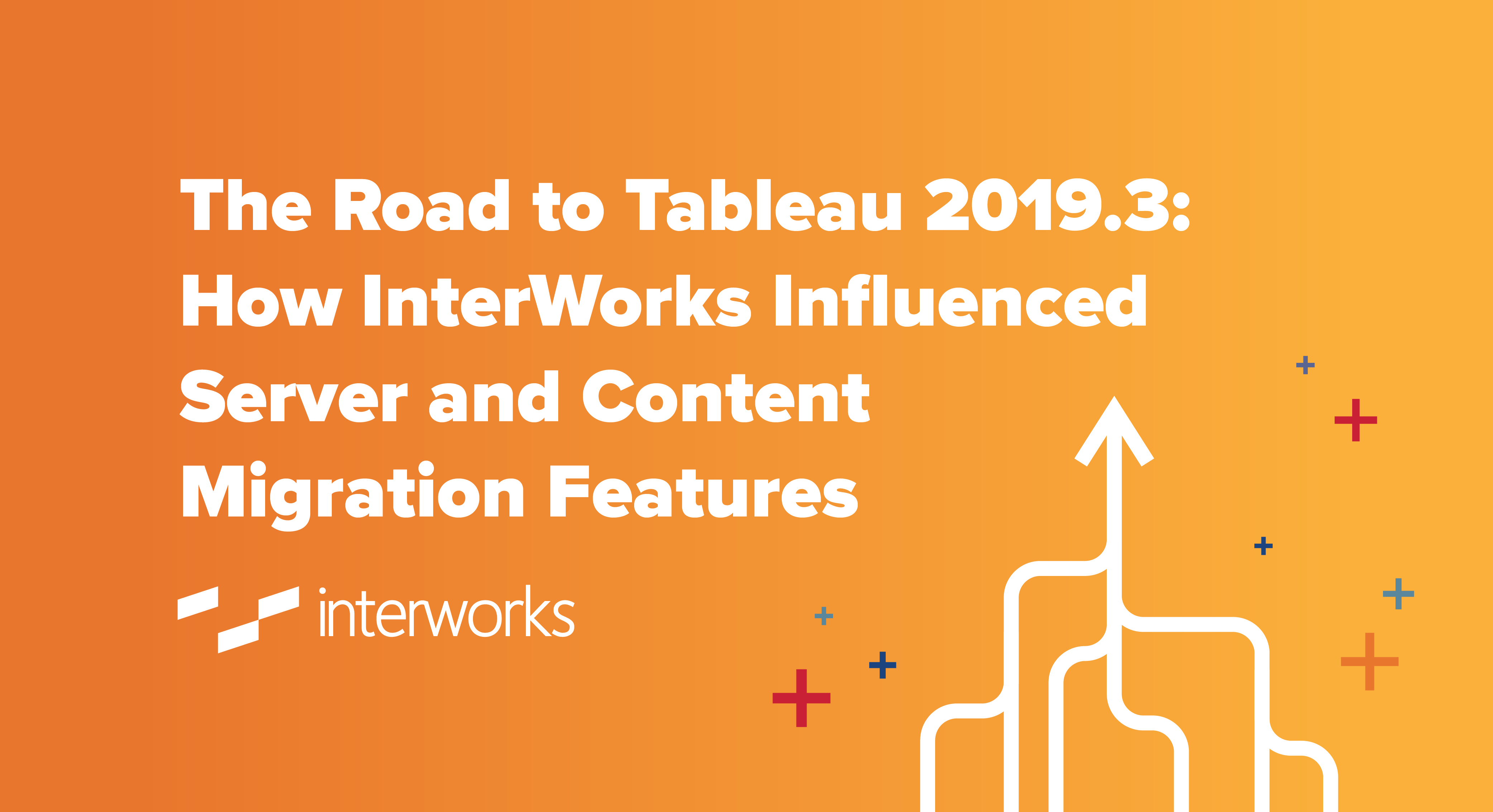 InterWorks fell in love with Tableau in 2008, and our Tableau expertise became a core part of the InterWorks identity. During those early years, Tableau was slowly winding its way through organizations. It would typically start out as a skunkworks project headed up by enthusiasts like us, eventually winning over the business leadership and finding its way into broad adoption across the enterprise.

It was during this period of broader enterprise adoption that we began to hear a recurring message from our clients: While Tableau is amazing for the desktop analyst and taking data decision-making to an entirely new level, it’s a tough product to manage within enterprise environments.

Something that has always made InterWorks unique is the scrappy nature of our people. When there isn’t a clear path or a button to push, we’ll blaze that path and build that button. Our consultants began building solutions for their clients and then sharing those with our other consultants until we had a toolbox full of scripts and templates that were shared across the team.

Out of this toolbox, Power Tools for Tableau was born. The toolbox was great for one-off client engagements, but these solutions were fragile and needed constant updating. We decided to build a full-fledged product that could provide similar functionality to our toolbox of scripts but would be robust enough that it could be trusted in enterprise environments.

What’s in a Tableau Workbook?

Our very first product was our Data Source Audit Tool. We bundled Data Source Audit with other small tools in our Workbook Tools for Tableau product. Our clients sometimes had thousands of workbooks, and something as simple as changing a column name in a data source could lead to a large disruption of service. Data Source Audit allowed customers to easily determine which workbooks used which data sources, columns and calculated fields, giving them the critical information they needed to make safe updates in their environment.

The Need for Tableau Workbook Migration

The understanding that larger organizations need the ability to easily move workbooks between multiple environments (e.g. Testing to Production) led to our next product effort. Our consultants would regularly be challenged to create migration solutions, but the solutions were always very customized to the individual client and usually built from scratch in each instance.

With that in mind, we built the Enterprise Deployment Tool (EDT). Organizations could now have their analysts build dashboards on their desktop and promote them to a development or test server. IT and other groups concerned with governance and security could review and ensure their requirements were met. Finally, the workbooks could be moved into a production environment and seen by all.

Tableau Server Resources Were Next

What happens when these larger organizations begin to fully utilize the power of Tableau? Aside from the benefits of true data and visualization availability, you begin to see Tableau Server resources straining to meet demand. Our team of consultants soon became experts in troubleshooting Tableau Server Resource issues, but this was often a laborious task of munging data from multiple log files and databases to understand the root cause of performance issues.

By Tableau Conference 2015, we were talking with accounts about the idea of a Server tool that would help monitor resource performance for larger implementations. We had our Desktop product running, and EDT was successful in many accounts, but we continued to hear that the #1 challenge our larger customers faced was resource management on their Tableau Servers. Going back to our scrappy consultants and their individual client successes, we sourced the idea of displaying performance results in one screen from the monitoring of both log files and hardware. Several of our accounts were interested, and offers for beta testing rolled in. Through 2016, we gathered feedback from our Server Workshops and other clients. We looked to understand the need further and create the best set of tools to address the issues.

Flash forward to February 2017 at our Server Workshop in Atlanta. We were set to show off some of the functionality from the new Power Tools for Tableau: Server, and one of our larger enterprise retail accounts was very interested. This became one of our first large-scale installations and we never looked back.

InterWorks has always built products and services targeted around innovation and serving gaps in the market. Beginning in 2013, our focus on the needs of our enterprise clients led to building these products that became Power Tools for Tableau. Working alongside Tableau through the entire process, we spent over six years in active development, sales, implementation and training of these products.

The InterWorks and Tableau partnership progressed even further this year when our performance and content migration tools were integrated into the Tableau family of products as part of the Server Management Add-on, released with Tableau 2019.3. We’re more excited than ever for our clients to get even more out of their Tableau investment using the Tableau Server Management Add-on, and we stand ready to help them utilize it to the fullest.

Detail Stories from the InterWorks Team

Finally, we feel it’s only fitting to leave you with two stories from the InterWorks team on their experiences with Power Tools for Tableau:

“2012. I’m in Chicago working for a client, specifically their mapping group which was driving Bing Maps. There were a hilarious number of foot-in-mouth experiences when using Google as a verb. At any rate, their IT group was blocking a broad migration from OBIEE to Tableau if Tableau couldn’t meet the requirement of developer not being allowed.

Even getting production and development (and QA and Staging) environments onto the same machine (as sites/projects) was months of debate. The challenge was three-fold: 1) take the workbook and remap the database from DEV to PROD 2) publish the workbook to the next environment 3) do all of that without teaching a whole team how to open Desktop, edit and republish. I dialed in some PowerShell help, did some Google Bing-Ing on XML manipulation in PowerShell and wrote what was a very early version of the Content Migration Tool. The system read from an XML config file that contained where-from, where-to, what-account, what-password kind of data; interacted with TabCMD; and was kicked off by the enterprise scheduler daily or so for years before we replaced it with real software in Power Tools for Tableau: Deployment.

We’re the only people that have ever scoped this stuff.”

“As 2016 progressed, we didn’t want to assume that we had a monopoly on the best ideas for creating new functionality that was integrated with Tableau, so we decided to get back out on the road and spend time with the various Tableau user groups again. It would look a little different this time around. Instead of going into monologue mode on our latest and greatest functionality, we wanted to spend more time listening and gathering input in a collaborative workshop environment.

I brought their feedback to our development team who was actually in the process of building a new server monitoring tool that would be integrated with Tableau Server. We honed our efforts based on the workshop discussions. The team worked rapidly to incorporate new functionality over the months that followed, and we released this new tool (called Power Tools for Tableau: Server) at the end of 2016 at the Tableau Conference in Austin.”

The InterWorks team is always busy exploring new ways to help our clients use Tableau more effectively. As far as Tableau 2019.3 goes, we’re ready to jump in and help you make the most of each new feature. If you’re ready to get started, particularly with the Tableau Server Management Add-on, we’d love to chat!