Conference season is in full swing, and the InterWorks crew has been attending numerous data and analytics conferences, getting up to speed on the latest developments from our partners. Case in point: Alteryx Inspire 2022 wrapped up two weeks ago in Denver, Colorado.

We definitely encourage you to check out the Alteryx blog for the full rundown of what was shared at Inspire. In that spirit, our focus for this piece is going to be more on what our people took away from Inspire. What were the big moments for them? What’s exciting about Alteryx in 2022? And what exciting things might be just around the corner for Alteryx fans? I sat down with our resident Alteryx enthusiasts Ben Young, Jubail Caballero and Ryan Callihan to find out.

Q: What were your biggest takeaways from Alteryx Inspire this year?

Jubail: Most of us were curious what Alteryx’s cloud strategy was going to be moving forward, and we all walked out of the conference having a clear idea of what that is. We were really wowed by some of the new products they’re rolling out, specifically Auto Insights. I think that, for the price, there’s a lot of value in that product.

Ben: Like Jubail said, coming into Inspire, we weren’t sure what Alteryx was planning for the cloud. Coming out of the conference, I was impressed with the products they’ve been purchasing lately, and they have a lot of technological promise. They’re making the right acquisitions to fill in any gaps they have, so it’ll be interesting and encouraging to see how these new acquisitions integrate into a more robust Alteryx ecosystem.

Ryan: We’ve been consulting on Alteryx Designer Desktop and Alteryx Server for a long time, but we’ve been missing a cloud-native product in their ecosystem. I think they made the right call in acquiring Trifecta, and now you have Alteryx Designer Cloud powered by Trifecta. We’re still evaluating the technology, but so far it looks very promising. It was built natively in the cloud, it’s functional, and you can already start utilizing it to do a bunch of things. I think Alteryx will eventually put some new UI and tooling into it, as well as everyone’s favorite functions from Alteryx Designer Desktop, but people can get started in this cloud-based data prep tool right now for their data engineering needs.

Jubail: I think we’re all hyped about the new tools Alteryx is adding, but it’s also worth mentioning that Alteryx is also adding tons of new connectors to their existing tools. I know that’s not the most exciting thing in the world, but it is definitely a good thing. Another thing that stood out to me about the new Designer Cloud is that it’s compatible with Google, AWS and Azure right out of the box. You don’t really see many tools that are agnostic to all of these backend providers. Finally, and this is a really specific thing that maybe not everyone cares about, but Alteryx will provide support for VDI applications both persistent and non-persistent in the 22.1 update. My colleague Tom McCullough actually put me in touch with a client of ours that is using VDIs for Alteryx, which hasn’t been supported historically, so this will be a huge boost for them. 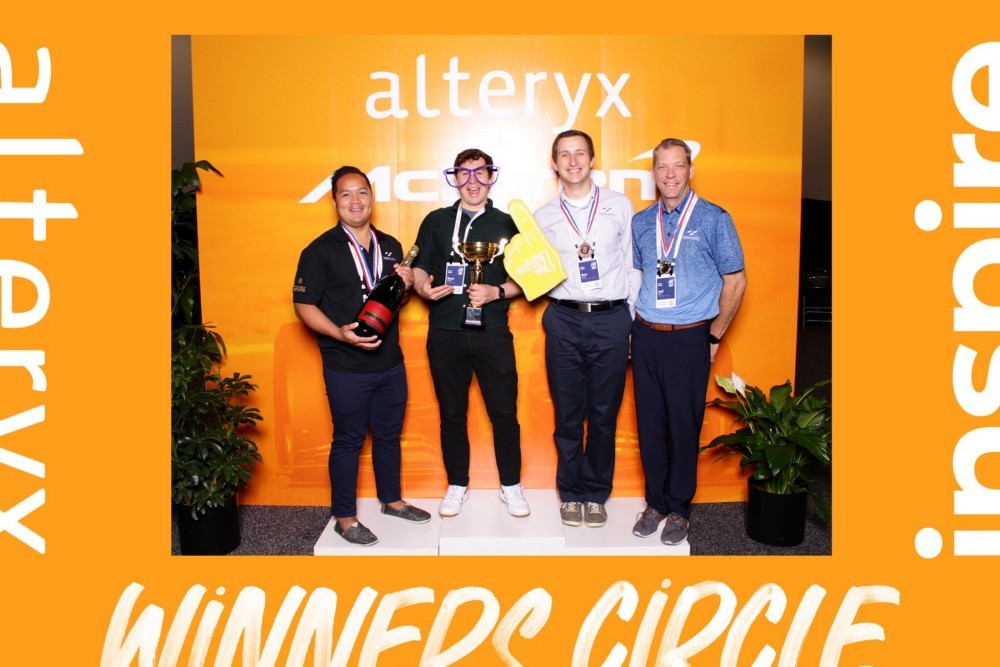 Above: The InterWorks crew at Alteryx Inspire 2022

Q: Where does Alteryx fit into our recommended analytics stack in 2022?

Ben: In particular for clients who don’t have a ton of budget for a big BI ecosystem, Alteryx is becoming a solid option when it comes to getting started with not only historical analytics (i.e. what happened) but also diagnostic analytics (i.e. why did this happen).

Jubail: Alteryx in general is a great starter for performing proofs of concept on datasets or data engineering pipelines. Just about anyone can build a data flow, apply actual data engineering and then productionalize it as part of the prototyping process.

With Auto Insights, if you’re a small organization and you don’t have a big analytics team – or maybe you’re just starting out on your data journey – you can easily feed this tool time-series data, run it through some machine learning algorithms, and come up with valuable insights. Let’s say you feed it time-series sales data. It’s pretty simple to discover insights like whether sales are up or down year over year, which products perform better than others or which regions are doing better than others. You can then slice and dice that data across dimensions, create benchmarks and so on, and it’s all available right out of the box.

Being able to do all that without a lot of the effort and resources you might traditionally have needed in order to uncover such insights is a great way for organizations to start meaningful data conversations. I also think Auto Insights is potentially just as useful for big organizations as small organizations.

Q: What do all of these developments mean for existing Alteryx users moving forward?

Ben: At a macro level, people who are already invested in Alteryx should be really encouraged. We have several clients who love Alteryx, and they’ll be happy to see the ecosystem growing and filling in gaps. We also have some clients that use a combination of Alteryx and other platforms like Snowflake. One of these clients is moving increasingly toward the cloud and was worried that they’d eventually have to retrain their users to use new tools that could already do data engineering in the cloud. Given what was covered at Inspire, this client will be relieved to know that they’ll be able to do cloud-based data engineering using Designer Cloud and won’t have to switch to something else or retrain their users.

Alteryx also announced a couple more things in terms of new headline features, such as the ability to work more with Pure SQL. This won’t mean much for non-technical Alteryx users, but it does open the door for better collaboration between developers and those with coding backgrounds.

As an Alteryx user myself, I was straight-up fanboying about Auto Insights by the end of the conference. Even with other tools, it would take me hours to find the same insights that it can find instantly, so it’s great for users of any skill level. If I’m a client talking with my manager, and they ask me what’s great about X, Y or Z, I can come back with that analysis right away, accelerating the types of conversations we’re able to have and reducing time spent digging up insights manually.

There are ultimately some question marks remaining as to how these new tools will officially integrate into the Alteryx ecosystem, but all Alteryx users should be pleased with what they see. Alteryx is listening and adapting, and we’re excited to see where these new developments take them, as well as what our clients will achieve.

Looking for Help with Alteryx?

If you’re curious where Alteryx’s growing suite of tools might fit into your analytics practice, or if you’re already an Alteryx user looking to maximize your efforts, our team would love to chat! Let us know your needs in the contact form below. We also wanted to shout-out this excellent Alteryx learning resource created by one of our clients for further reading.