InterWorks
×
Contact Us
BACK TO TEAM
Kody Bradley
Systems Engineer
Email
Kody has been in love with music his entire life. During his high school days, he spent a lot of time going to venues where local bands played. Eventually, that led to the purchase of his first guitar, and he’s played music with friends ever since. Less of a serious endeavor, getting together to play with a group is more of a stress reliever for Kody. He doesn’t play 24/7, but it’s a constant in his life that he often visits to forget his troubles and have fun.

IT
Quick Q&A: Why We Like Microsoft for Cloud-Based Productivity 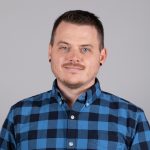 Garrett Sauls, Aaron Richardson and Kody Bradley
May 25, 2021
IT
Windows Search Not Working in Windows Server 2012 and Windows 8