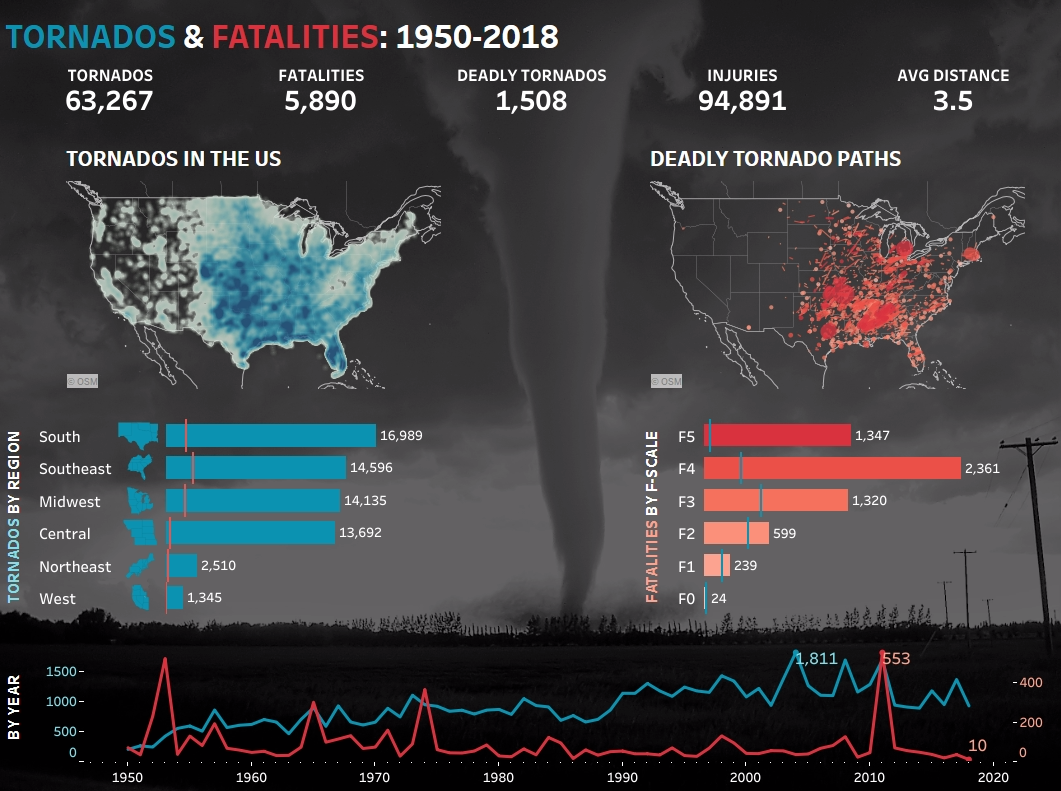 Like many non-native Oklahomans, one of my greatest fears upon moving to the Sooner State was the threat of tornados. After almost five years, that fear has mostly subsided for a number of reasons: the storm shelter in my garage, the weather app on my phone, my growing familiarity with Oklahoma weather and the relatively few tornados and tornado-related deaths since my arrival (knock on wood).

Nationwide, we have seen a similar trend. Last year (2018) had the fewest tornado-related deaths on record in the US, going back to when tornados began to be reliably tracked in 1875. This statistical anomaly occurred only seven years after the deadliest year for tornados since 1950. Even accounting for the spike in 2011, tornado deaths have been on the decline. Whether the decrease was caused by improved forecasts, better warning systems, climate change (2018 also happened to be one of the warmest years on record) or just plain luck, hopefully deaths from these killer weather events continue to trend downward.

How to Navigate the Dashboard

Check out the history of tornados in the US since 1950 by exploring this interactive dashboard. Click on any chart to filter. Hover over any chart for additional details:

The purpose of this dashboard is twofold—first: to provide useful information about when and where tornados occur in the US; second: to showcase some of Tableau’s newest features. The new features used in the dashboard include the following:

Below is a navigation tutorial. You can see the different features of the viz in action:

The majority of the data came from the Storm Prediction Center of the National Weather Service. This data source did not have updated data for the final four months of 2018 (partially due to the government shutdown), so that data came from compiled NOAA data stored on Wikipedia.

Tornado data for Alaska and Hawaii has been removed; the two states have combined for fewer than 50 tornados and zero (0) fatalities since 1950. My intention is to keep the dashboard current with the latest data, so please check back for updates.

Analytics Consultant
Tornados in the US: 1950-2018 Data Viz Like many non-native Oklahomans, one of my greatest fears upon moving to the Sooner State was the threat of tornados. After almost five ...
Tableau and Mint Help You Answer the Question: ‘Where Did All My Money Go?’ With the new year comes resolutions to do better in 2016. Many have made (and already broken) the goal to exercise more. Some have ...