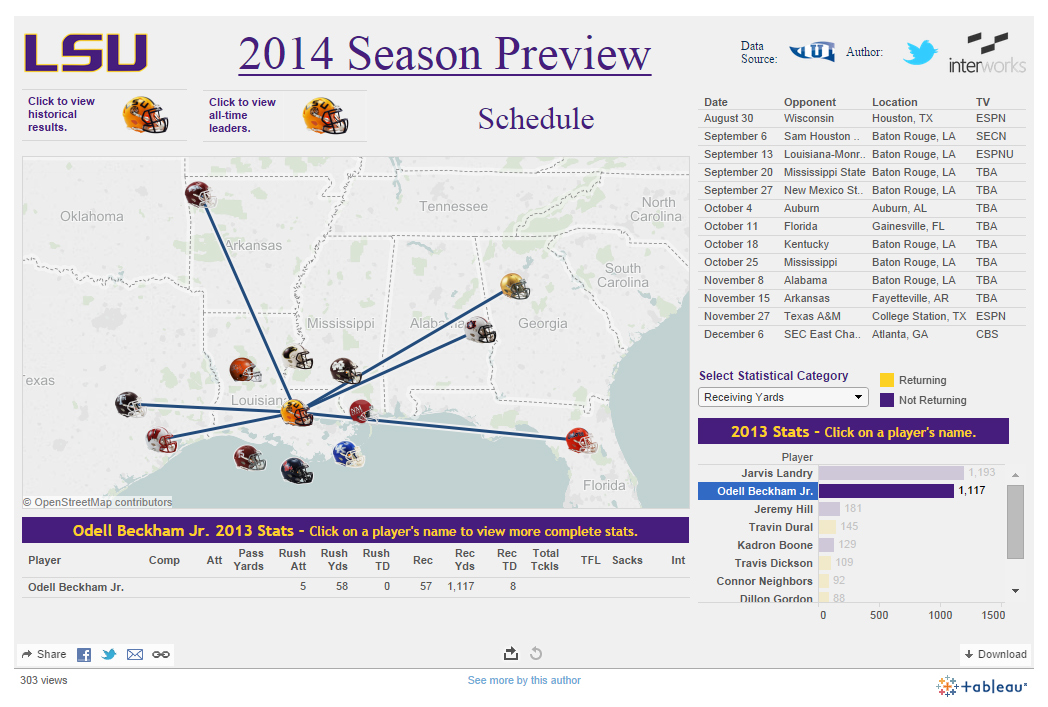 If you’re a sports fan like me, the next few weeks can seem like an eternity. The World Cup and NBA Finals are over, and the baseball playoffs have not yet started. Thus, we are left with three long weeks of waiting for the college football season to arrive.

After starting out with previews of BYU and Oklahoma State, LSU will be the third team I preview. The LSU visualization comes at the request of several co-workers who are LSU alumni. Plus, it provides me with an opportunity to learn more about one of the most storied programs in the history of college football. A few things that stand out are LSU’s light travel schedule this season, the number of All-Americans and national award winners the school has had, and the dominance the program has enjoyed since the turn of the century.

To build this preview, I first pulled data down from: http://www.sports-reference.com/cfb/. Then, I got to work building the charts that I thought would tell the story of LSU football.

In the preview, you will find three tabs. The first tab has LSU’s schedule for the upcoming season. The second tab has LSU’s historical results by season and opponent. The third tab contains a list of the all-time statistical leaders in LSU’s illustrious history, along with the major award winners. In addition to the tabs, there is a lot of additional interactivity built into the visualization.

Play around with the viz below. Hopefully, it will help to hold you over until the pads start popping in a few more weeks.

Analytics Consultant
Tornados in the US: 1950-2018 Data Viz Like many non-native Oklahomans, one of my greatest fears upon moving to the Sooner State was the threat of tornados. After almost five ...
Tableau and Mint Help You Answer the Question: ‘Where Did All My Money Go?’ With the new year comes resolutions to do better in 2016. Many have made (and already broken) the goal to exercise more. Some have ...