Visualising Tea Production and Consumption Around the Globe

Visualising Tea Production and Consumption Around the Globe 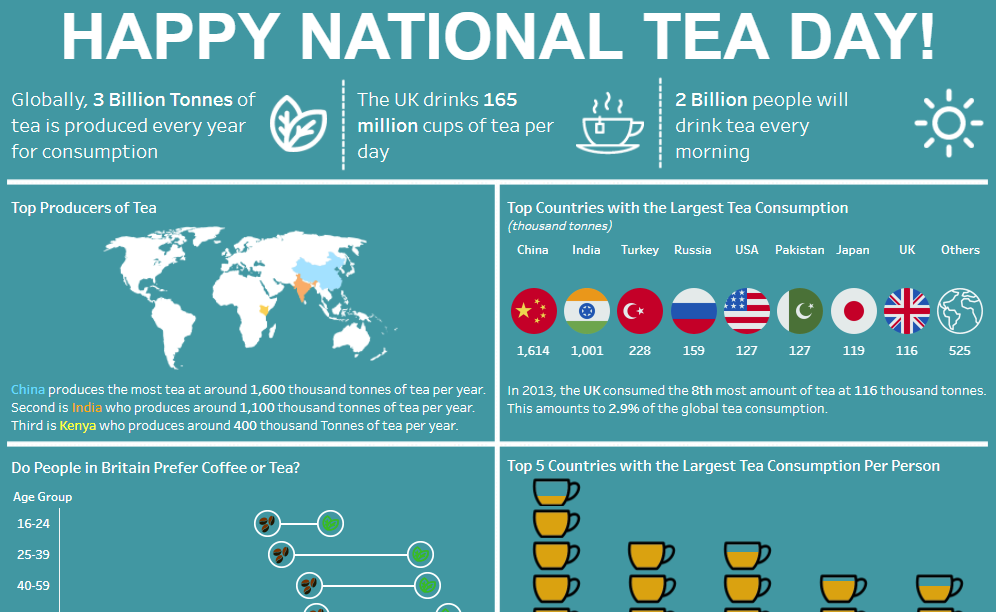 As National Tea Day in the UK is soon approaching (21st April), I thought it would be the perfect time to create a viz dedicated to tea! After browsing online, I found datasets related to the production, exportation and consumption of tea. The first dataset I found was from a report by the FAO (Food and Agriculture Organization of the United Nations). I also found datasets that looked at consumption annual per capita and also whether people preferred tea or coffee, so I threw them in for good measure! But this was about as much open-source data I could find, disappointing for a nation of tea drinkers!

Analysing the Results in Tableau

As much of the data was found in tables within PDF reports, Tableau’s PDF data connector was a perfect tool for this scenario. I then used the Data Interpreter and Pivot options to get the data in the correct format for creating visualisations. As I had high-level numbers to work with, I decided to make an infographic in Tableau to combine all my findings into one place.

As expected, China was the biggest producer and consumer of tea overall. In 2013, the UK consumed the 8th largest amount of tea at 116 thousand tonnes. However, we should take the population into account. I then used the consumption annual per capita dataset and had a go at estimating the number of cups each person consumes. Surprisingly, the UK only came in 3rd! On average, people in the UK consume 2.7 cups of tea each day.

Then the age-old question, tea or coffee? Frustratingly, the only dataset I could find was for Britain. This wasn’t ideal, because as we all know, the UK and Britain are different! Either way, I used this dataset and it would seem that the British prefer tea over coffee across every age group! As the age group increases, so do people’s love for both coffee and tea (with tea being a clear winner). So, it looks like Britons like their tea, but per capita, people in Turkey and Ireland are much heavier tea drinkers! It’ll be interesting to see the types of tea each country drinks, so I shall be on the search for this dataset … to be conTEAnued …

Analytics Consultant
LinkedIn
Bound for Berlin: InterWorks Awaits Tableau Conference Europe 2019 It’s nearly that time of year again! I am really looking forward to Tableau Conference Europe 2019 this month! Soon, I’ll be flying ...
Travel Made Easy with Tableau Calendar View Planning a holiday can be quite stressful in its own right. However, when I was planning a recent trip to Asia that involved making ...