Create a Sunburst Chart with Map Layers in Tableau

Create a Sunburst Chart with Map Layers in Tableau 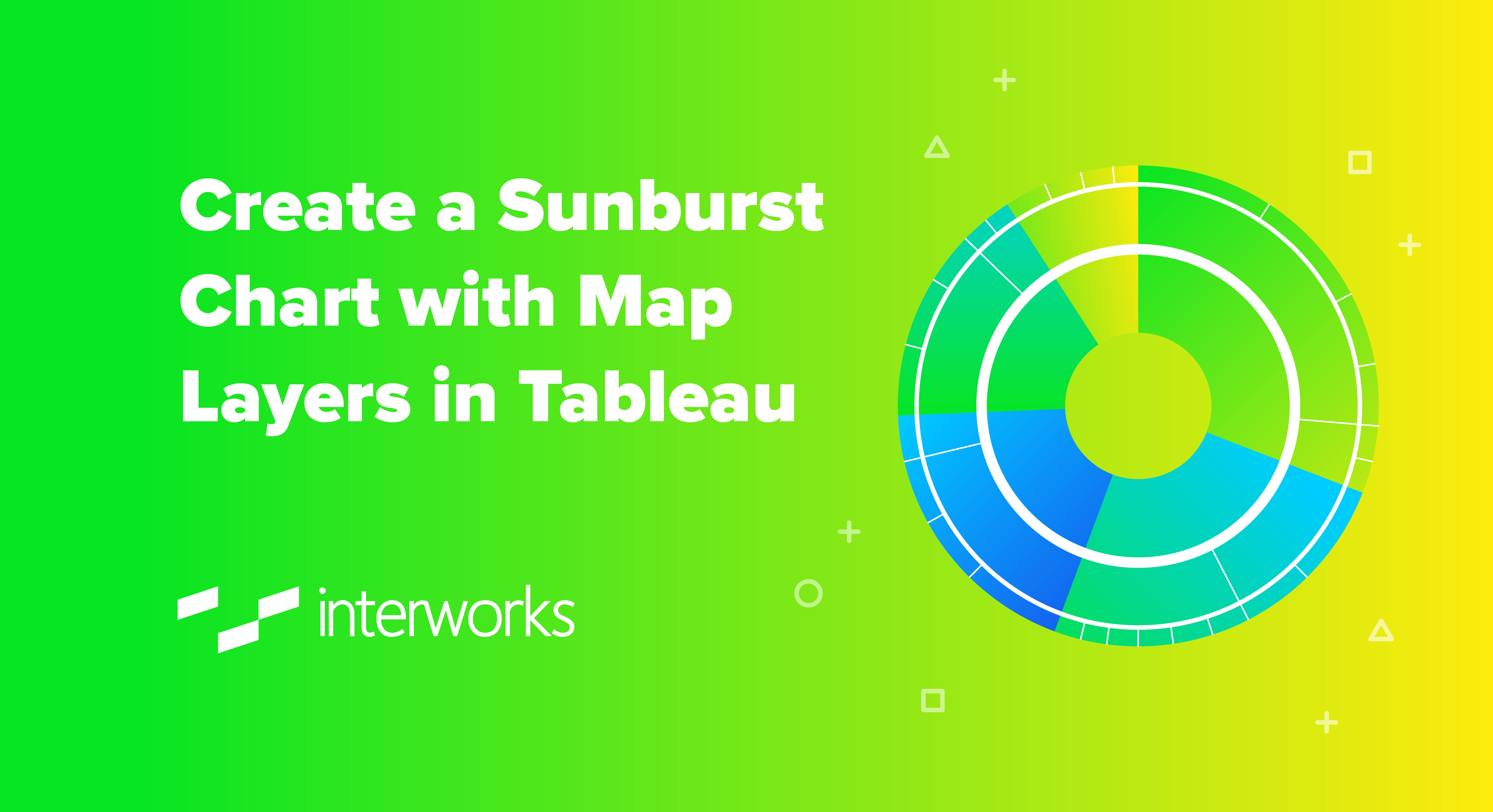 It’s rare that a new Tableau feature can be used for so many other use cases beyond those intended. The Tableau community is continuing to find new ways to make the most out of Map Layers, a new feature from version 2020.4. Some are calling it a game-changer already. So, what is all that fuss about?

A Review of Map Layers

Tableau Desktop 2020.4 introduced the management of map layers. Up until that version, if we wanted to show or fill two layers on a map instead of one (country and states, for example, each with different measures on Color), we had to duplicate our longitude (or latitude) and create a dual-axis chart. Still, we were limited to two layers overall. That’s now history.

Map layers allow us to add as many layers in our map as we want. We just drag the geo field into our view, move it onto Add a Marks Layer in the upper-left corner and have another layer we can work on with color, size, text or tooltips, completely independent of other layers. What’s more: We can rename each layer, hide or show them, and prevent them from being clicked or automatically zoomed in. You can find a detailed explanation on map layers in my previous blog post.

A Use Case for the Sunburst Chart

What is a sunburst chart? Well, it’s easier to show than to explain: 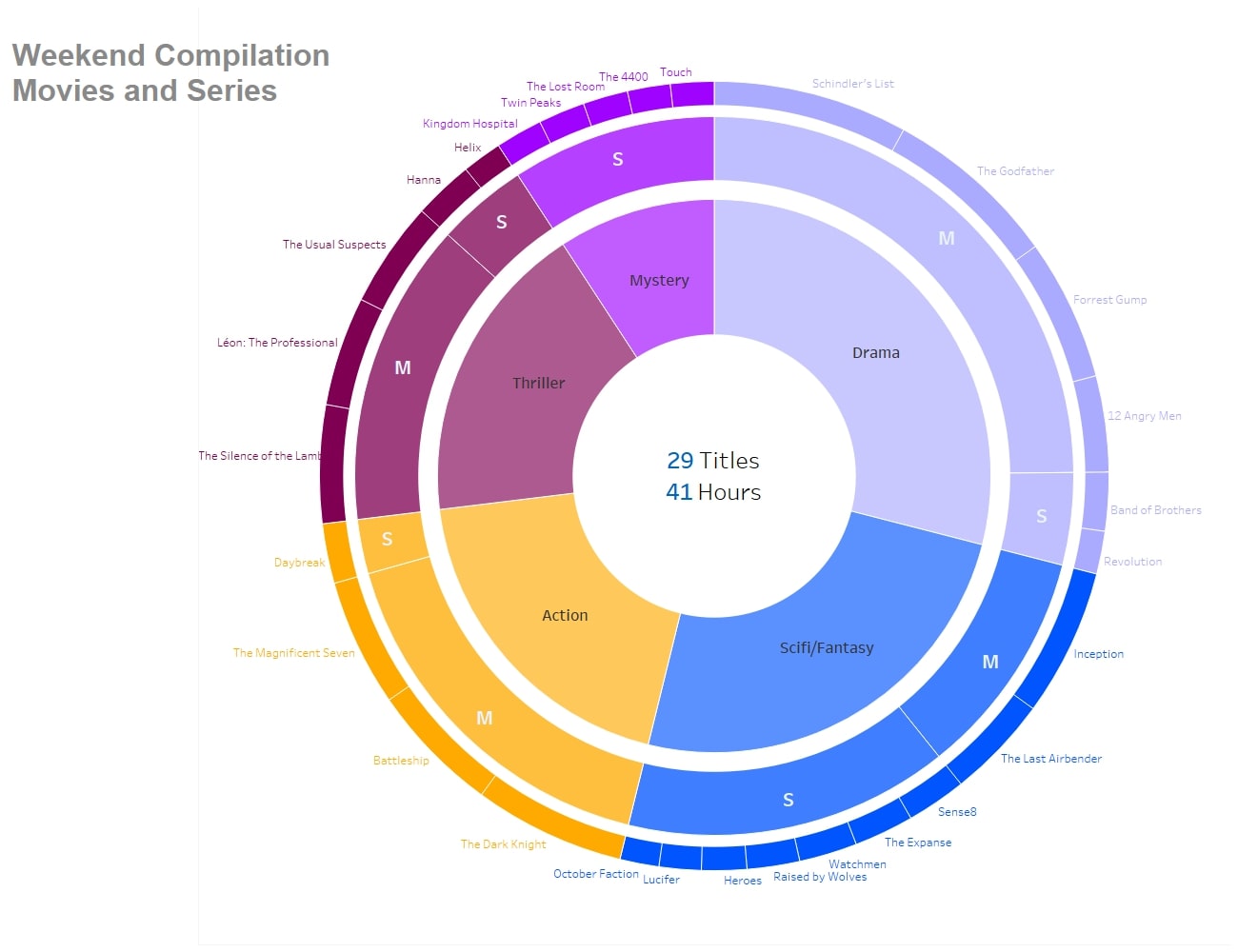 And what do I need a sunburst chart for? Well, it is more of a visually pleasing chart than it is one for deeper analysis. Sunbursts give a quick survey of one or several measures on at least two dimensions, and most times more. Like in this case: Here, we have a few movies and series ready to be watched on a cozy evening in. I can visualize what movies or series belong to which genre and how long their runtime is. The chart as a whole tells me how long the runtime is for all movies and series (taken as one episode) and in which genre I have the most hours of movie time represented. So, how do we build a chart like this?

The good news: We don’t need a single calculation for it. No sine or cosine functions, no table calculations or LODs – the only features we are using are maps and Mark types.

The bad news: What I am describing and showing here is quite new as of now (Tableau version 2020.4), and as this feature is not being used as intended, we encounter a lot of limitations and strange behavior from Tableau. But let’s disregard that for now and build!

Create Layers and Adapt the View

In this example, we are using a small dataset that consists of 29 movies or series from five genres with their runtime each. You can rebuild everything with data from the Tableau Superstore, of course. If you want to go with the screenshots here, just copy the following table and paste it into an empty sheet in Tableau Desktop:

Once you have that ready, here are the steps to begin with:

Now you should have a big, fat blue circle in the middle of your view: 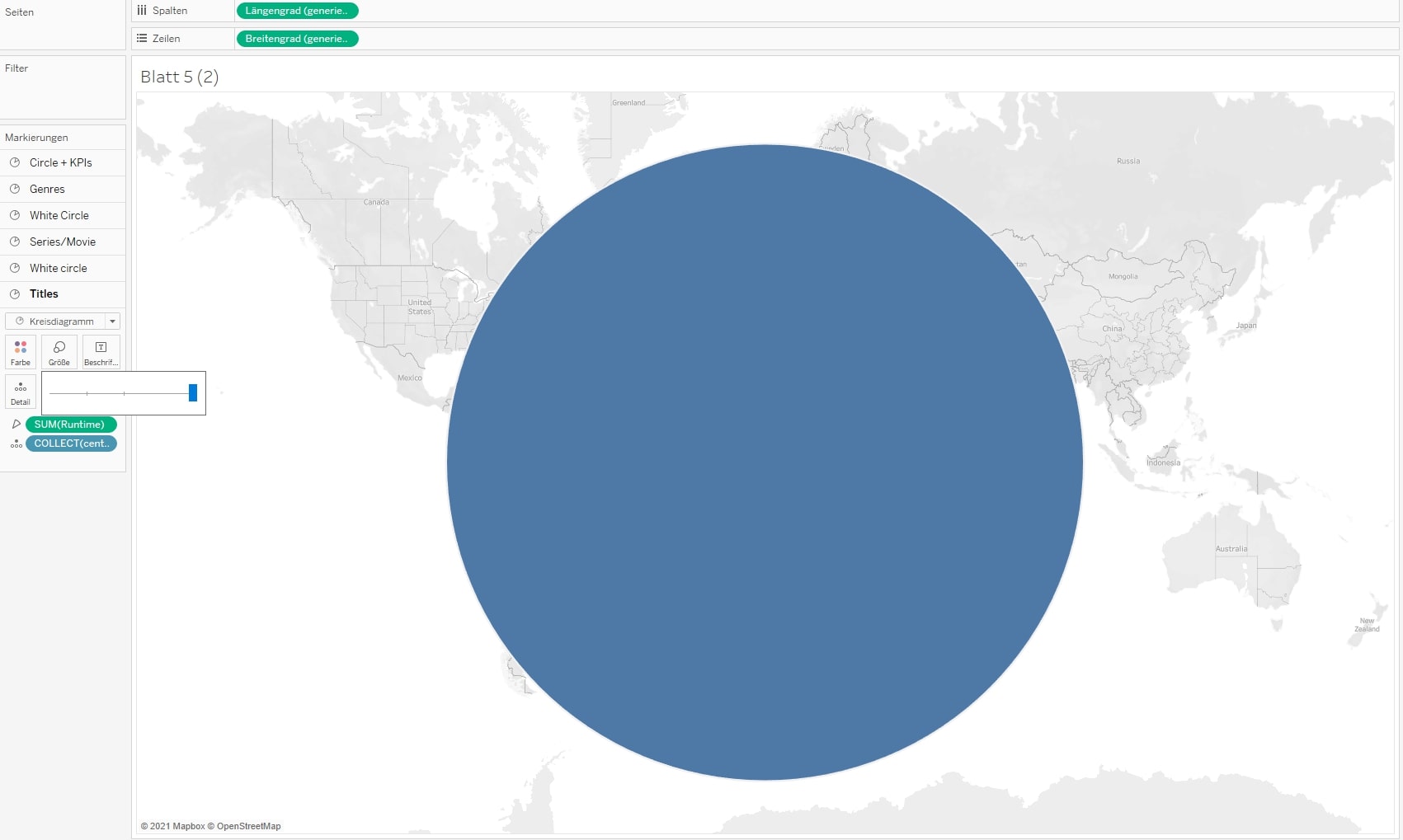 Next, we have to fill the map layers. We start at the lowest layer and keep doing most of the stuff there before we go on to the next one. Here are the steps: 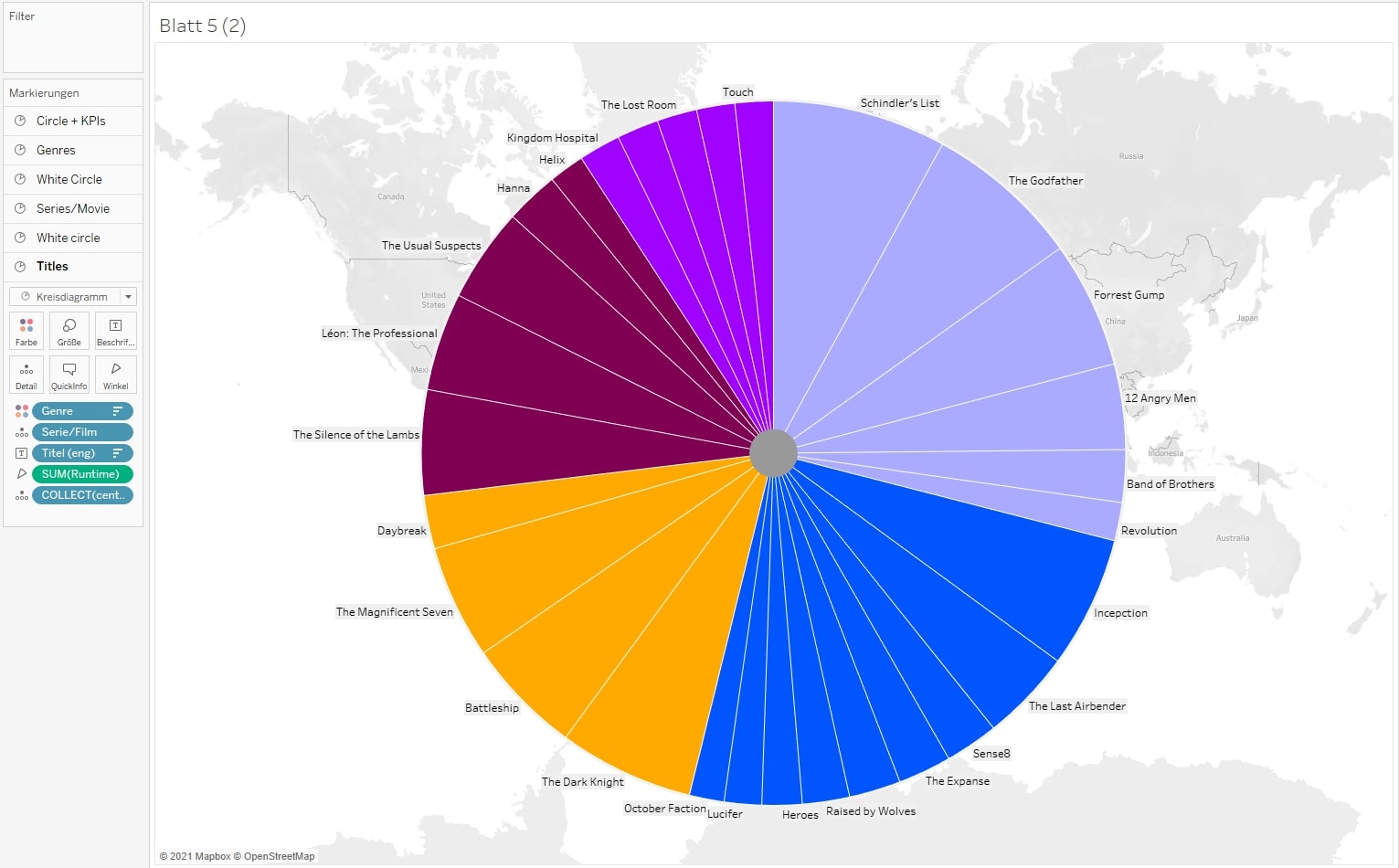 4. Jump to the next but one map layer – (Series/Film), in our example – and drag [Genre] and [Series/Film] into that layer as well: [Genre] onto Color, [Series/Film] onto Detail. We don’t need the [Title] in here, as we are on the second of our three rings. Color the border white.
5. Again, jump to the next but one map layer (Genre). Drag the dimension [Genre] onto Color and color the border white.
6. Now, color the two map layers white that we skipped before. That ensures our spaces between the rings are white. 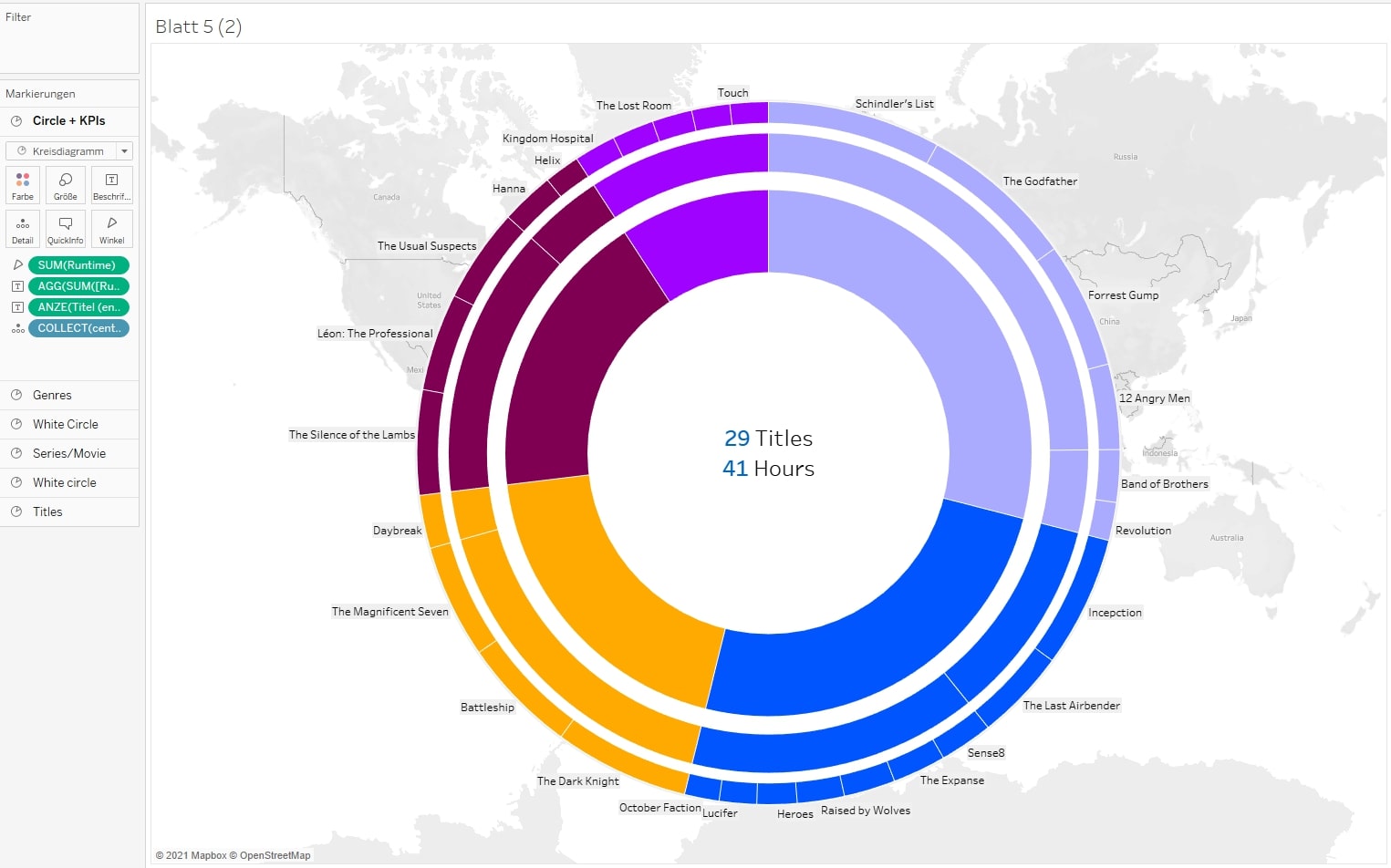 3. Optional: Adjust the tooltips or deactivate them. Important note: Tooltips can be controlled by each map layer but can only be activated/deactivated for all layers at once. If you want to get rid of tooltips on specific layers, see step 4.
4. Disable the selection for the white “space”-pies. That prevents the tooltips from being shown as well.

Remove the headers, grid lines and zero lines. An optional step: design everything that’s left as you wish Voilá! You now have a sunburst chart, completely without a single calculation but with a bunch of map layers. Explore the complete dashboard here: