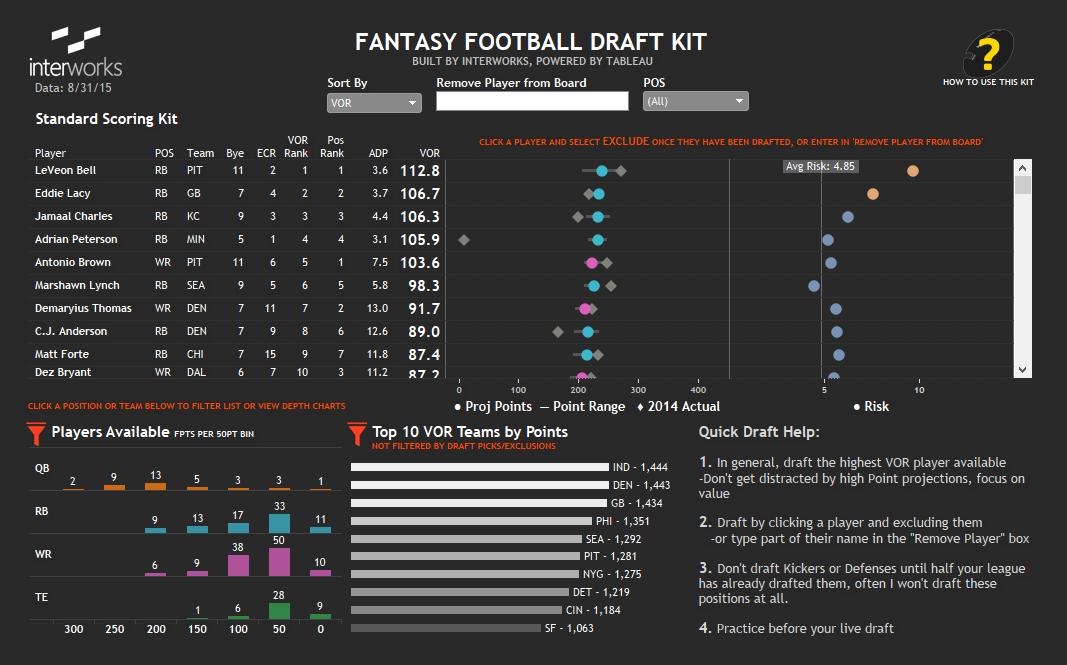 Fantasy Football has become an incredible phenomenon in the United States. According to FSTA, over 56 million people will participate in some form of fantasy sports in 2015 with 73% playing fantasy football. I first started in 2007 as a means to socialize with coworkers at a new job. At the time, I didn’t even much care for sports in general and only followed my favorite sport, hockey, with passing interest. After starting fantasy football though, all that changed.  Sports has become a major interest for me over the last eight years, and I even started playing fantasy baseball a few years ago with my dad (won my first year athankyouverymuch).

The trickiest part of any fantasy league, regardless of sport, is the draft. While there are many fantasy sites that will host your league, most for free, their draft resources are often secured behind a paywall or archaic access layers. Until last year, I drafted pretty much blindly. Unless you stay focused on the sports news cycle every day, it can be very difficult to know who’s playing well, injured, suspended, etc., not to mention keeping track of promising rookie talent. Fortunately, fantasy sports are highly quantitative, so they lend themselves well to analysis and visualization. There are hundreds of websites that will provide you their experts’ pre-season player rankings, but all of them differ because of the difficult nature of predicting outcomes of team performance and individual contribution.

Last year, I decided that I’d had enough of drafting blindly, and since I spend a terrifying number of my waking hours working with Tableau, I figured I could make a draft kit to help me. I set out last August to begin researching intelligent drafting techniques and compiled data based on VBD, or Value Based Drafting. I pulled playing projections from several sites and computed averages across them to attempt a consensus rating for each player. Then, I ran it all through a VBD calculator. After that, I set up a draft kit in Tableau and prepared a blog post very similar to the one you’re reading now. Sadly, the draft kit that I produced relied on Tableau’s Set functionality, which doesn’t currently function on Tableau Server (including Tableau Public). However, I still used that draft kit in the three football leagues I participated in last year, and the results were staggeringly positive. I led two of my leagues in points scored (one of the InterWorks leagues by 156 points in front of second place and almost 300 points in front of third – that’s like having two great extra players starting every week!). The only league I didn’t lead in points was the league I took Adrian Peterson in (I don’t need to detail why was a problem in 2014).

This year, I knew I’d repeat my draft kit work, but I wanted to make the data sourcing easier and make it available to the public so that everyone could draft better. During my data search, I ran across a website that had already aggregated data from over a dozen sites, AND they had already built a score like VBD and related analysis with that data. On top of that, their data was easily downloadable! With that site’s 2015 data, I just needed to bring in some basic info for historical years. With a bit of enrichment in Excel, I was ready to update my draft kit.

Below you’ll find draft kits for both Standard Scoring and PPR (points per reception). Following the kits, I have some explanations of the metrics and terms used in case you are unfamiliar with them.

Keep in mind that you’ll need to draft players in your website; any action you take on this Tableau dashboard won’t affect your actual draft. Additionally, you’ll want to try and keep up with draft pick filtering as players come off the board; otherwise, you’ll try to draft a player that isn’t available and spend time figuring out a replacement. Filtering instructions are on the dashboard, but you can click a player and select Exclude from the pop up or type the player name in the Remove Player From Board box.