Over the last twenty years, video games have become a cultural force in America. From movie spin-offs to t-shirts at Target, it’s almost impossible not to be touched by the gaming industry every day, even if you don’t consider yourself a “gamer.”  In this period of time, one developer has stood highest amongst the others. They master every genre they develop for, and their games are instantly recognizable. Their catalog unsurprisingly contains one of the highest grossing games of all time. I’m speaking, of course, about Blizzard Entertainment. I vividly remember loving one of their first games, “Rock and Roll Racing” on the Super Nintendo and have owned almost every release since. Even if you’re not familiar with the Blizzard name, you have likely heard of their largest properties: “Diablo,” “Starcraft” and the “Warcraft” series.

Blizzard’s most prolific game is the massive multiplayer online (MMO) blockbuster, “World of Warcraft,” known simply as WoW. Released in 2004 (much to the detriment of my college studies), WoW still has millions of subscribers around the world. Many MMOs have been released since WoW, but none have come close to the massive subscriber counts and cultural impact of Blizzard’s monster. After five expansions and almost eleven years, WoW’s subscriber counts aren’t what they once were. Even so, they are still exceptional, and Blizzard continues to develop new content to keep players happy.

Above: Data pulled from this source.

After peaking during the “Wrath of the Lich King” / early “Cataclysm” era, you can see that the number of subscribers has fallen in recent years. Each expansion does bring new/renewing users though, justifying Blizzard’s development efforts. The current expansion, “Warlords of Draenor,” has a peculiar spike and drop off compared to previous expansions. Interestingly, if you exclude “Warlords of Draenor” from the subscriber trend line, the current (May 2015) data suggests that subscriber counts are higher than if “Warlords of Draenor” had been received less favorably or not released at all. 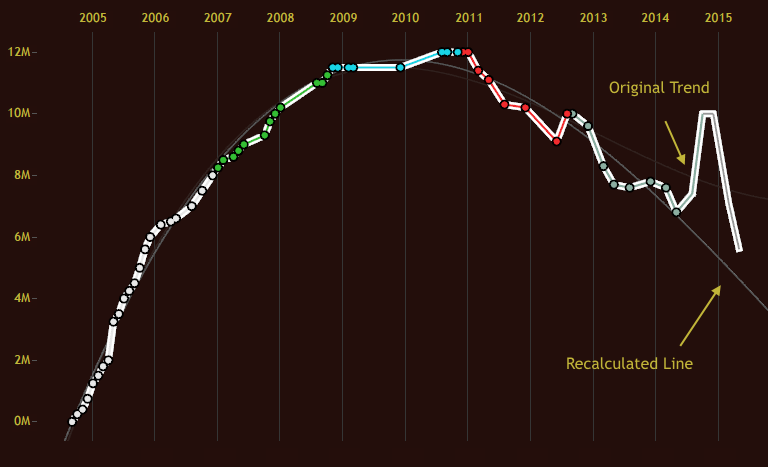 Above: The recalculated line is close to the actual May 2015 point but shows that the sharp “Warlords” decline shouldn’t be too concerning.

With a new expansion entitled “Legion” recently announced and more developers working on WoW than any point in the past, the future still looks bright for the venerable MMO.

WoW isn’t Blizzard’s only major property, of course. Blizzard’s long-running, sci-fi, real-time strategy game (RTS), “Starcraft,” as well as their fantasy role-playing game (RPG) and dungeon crawler, “Diablo,” have both been through multiple generations of gaming and releases. In the last several years, Blizzard has also expanded into new (for them) genres. “Hearthstone” is a one-on-one card game that has been wildly popular since its release last year. “Heroes of the Storm (HotS),” released this year, is Blizzard’s first stab at the popular DotA/MOBA (“Defense of the Ancients” / multiplayer online battle arena) genre that originally gained popularity as a free modification for “Warcraft 3.” Finally, next year, Blizzard is releasing a first-person shooter for the first time – the recently announced “Overwatch.”

Given that Blizzard’s releases are all hugely popular, I was curious how they compared to each other in popularity. Without access to actual sales data, I decided Google Search Trends would be a sufficient proxy. Google makes their search trend data available going all the way back to 2004, which is especially convenient given that WoW was released that year. The data doesn’t represent actual volume of searches, nor does a decrease in the values shown indicate a drop in the number of searches, but the numbers for each game are comparable to each other within reasonable time frames. You can read more about Google Search Trend data here.

Above: The data for this dashboard is based on this search.

Note that while the values displayed in my dashboard don’t match what is shown on the link here, the trends do match. If you export the data off that page, you’ll see that those values don’t match, though I don’t see an explanation for that fact on Google’s site. The only transformation I did was to average the weekly data to the month level prior to bringing it into Tableau for visualization.

One of the most popular game genres right now is the previously mentioned DotA/MOBA genre. DotA originated as modifications (mod) to various games going back to last century but gained significant popularity as a mod for “Warcraft 3.” DotA games became a significant vehicle for the emergence of professional competitive gaming, and dedicated DotA releases have become common. One of the early examples, which is still very successful, is Riot Games’ “League of Legends (LoL).” Another popular DotA is the appropriately named “DOTA 2” from Valve. Both of these games have constant tournaments around the world, but DOTA 2’s “The International,” which just took place this month, is perhaps the best known. With a total prize pool of over $18 million dollars and over $6 million going to the five-person team champions, it is one of the richest pots in competitive gaming, or e-sports. Even ESPN broadcasts some tournaments now.

Though Blizzard’s “Warcraft 3” was a huge contributor to the genre’s success, Blizzard didn’t have a DotA game of their own until this year’s HotS. While LoL and DOTA 2 have vast hero pools (characters to choose from when playing), the heroes were created for those games and have little backstory or lore associated with them. Blizzard has instead filled their game with major characters from their previous properties. This gives players a unique place to play as their favorite characters, going as far back as the eponymous “Lost Vikings,” Blizzard’s second game ever, to brand new legends like Johanna from “Diablo 3’s” expansion, “Reaper of Souls,” released just last year.

Though HotS is exceptionally young compared to LoL and DOTA 2, it’s popularity is rising quickly according to Google Search Trends.

The Google Search Trend query for this data is available here.

Gaming is something that many of us at InterWorks are passionate about, and creating data visualizations about gaming data is a real treat for me personally. Tableau is an amazing tool for visualizing your data, regardless of your industry. If you’ve read my bio, you’ll know I come from another gaming industry, the casino world, which ALSO calls itself the gaming industry (no end of confusion here at InterWorks HQ either). I still love showing casinos how they can make better decisions with their data using Tableau, all at a fraction of the cost of industry-specific options I’ve worked with in the past. If you haven’t used Tableau before, you can download a free trial and give it a spin.

Disclaimer: All trademarks used herein are the property of their respective owners. No affiliation or endorsement is implied or intended by any reference thereto.

Visualization Practice & Solutions Lead
Twitter
Google+
LinkedIn
2021 Tableau Fantasy Football Draft Kit Welcome back to a 100% definitely nothing bad is going to happen year in professional football! Last year’s uncertainty didn’t ...
2020 Tableau Fantasy Football Draft Kit While 2020 has hardly been the year anyone could have predicted, sports, uh … finds a way. The NFL is the first major sports league to ...