The Data Behind Team InterWorks at Oklahoma Freewheel

The Data Behind Team InterWorks at Oklahoma Freewheel

Earlier this year, a good friend of mine, who is responsible for me working at InterWorks, wrote a blog post about his personal weight loss journey and how he uses data to enhance his training efficiency. Brian’s post really made an impact internally at InterWorks. We saw someone very loved within the InterWorks family become practically half (physically) the man he was in a short amount of time while having a blast doing it. Many of us knew we could do the same and were inspired by Brian’s lead. We hopped on bikes, got in the pool and started running again, always following Brian’s lead. In the coming months, we hope to bring you more posts about all of our journeys and how we use data and Tableau to visualize the collective suffering effort.

In early March, Brian told me about an upcoming event that would prove to kick my own efforts into high gear, Oklahoma Freewheel. Freewheel is a 450-mile ride across the entire state of Oklahoma. In June. If you haven’t been, Oklahoma is not the friendliest weather state from June through August. With daytime averages of 90°+ temperatures and 70% humidity, it can be oppressive to simply walk from your car to the office, and we were going to cycle 70 miles a day. Sounds exactly like anyone’s vacation plans right?

Despite the clear risk to our health, we managed to gather fifteen InterWorkers, including our CEO, to brave the hellish conditions. We decided to all ride with Strava. Brian had already converted Strava’s exports into data we could use in Tableau (stay tuned to our blog for more information about exporting Strava data for Tableau), so we knew we’d be able to make some fun visualizations if we survived. Check out our team jerseys, the route, our teams and some interesting stats below! 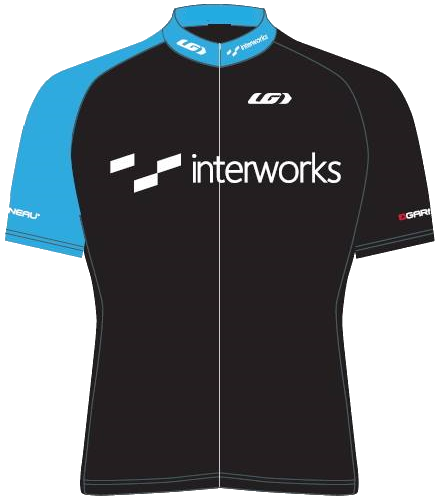 Above: The Team InterWorks jersey, designed by Jacob Niebergall. 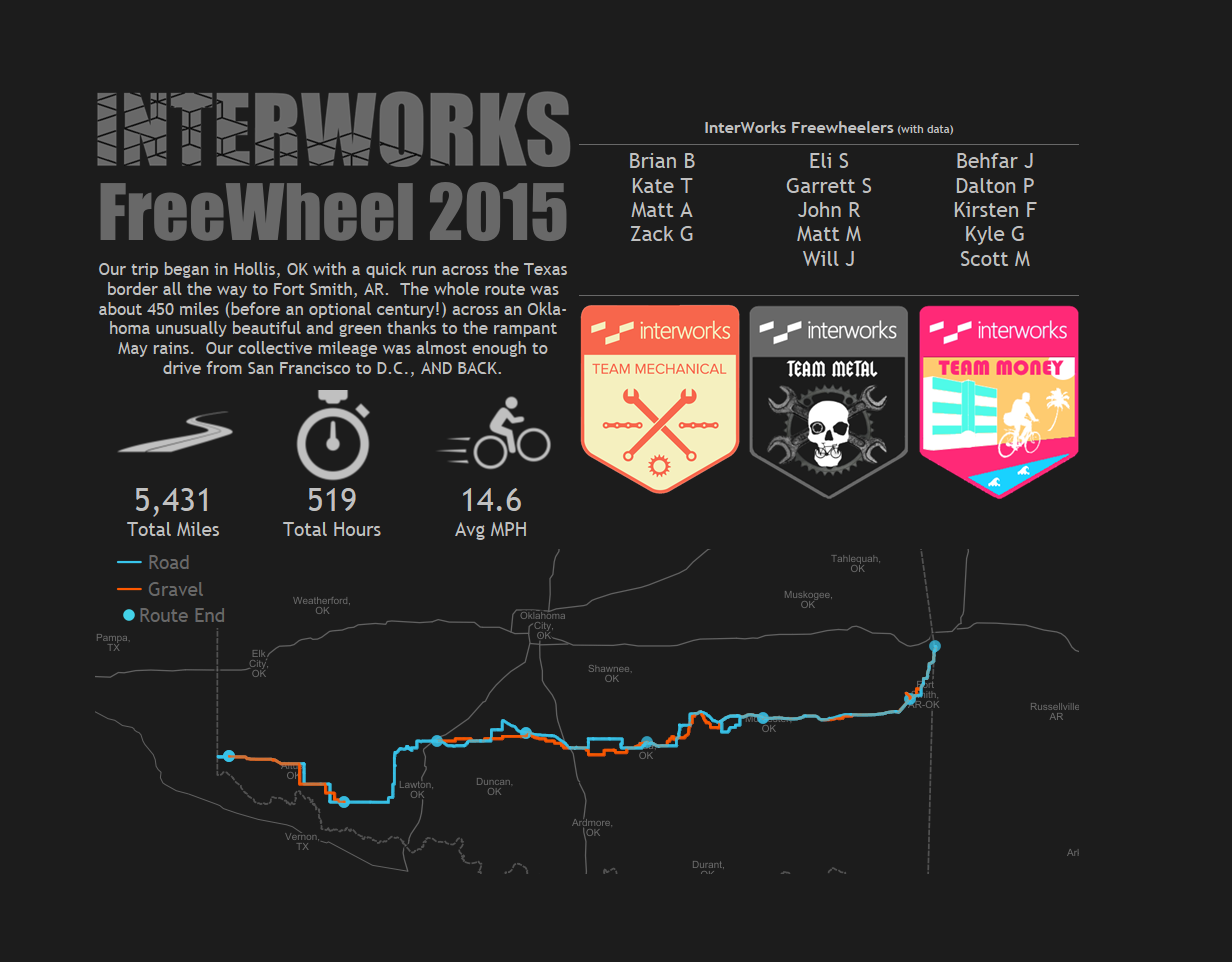 Above: A nice overview of Team InterWorks’ efforts.

After hours of research and pestering colleague and former pro Daniel Kurylo, I settled on an upper entry-level bike from my local REI, the Novara Strada. The Strada comes with the great 105 groupset, a carbon fork and disc brakes, making it a solid starter bike to begin putting some serious miles on the road. I knew that starting my training in mid-March was going to be tough for the long hot rides of Freewheel the second week of June. 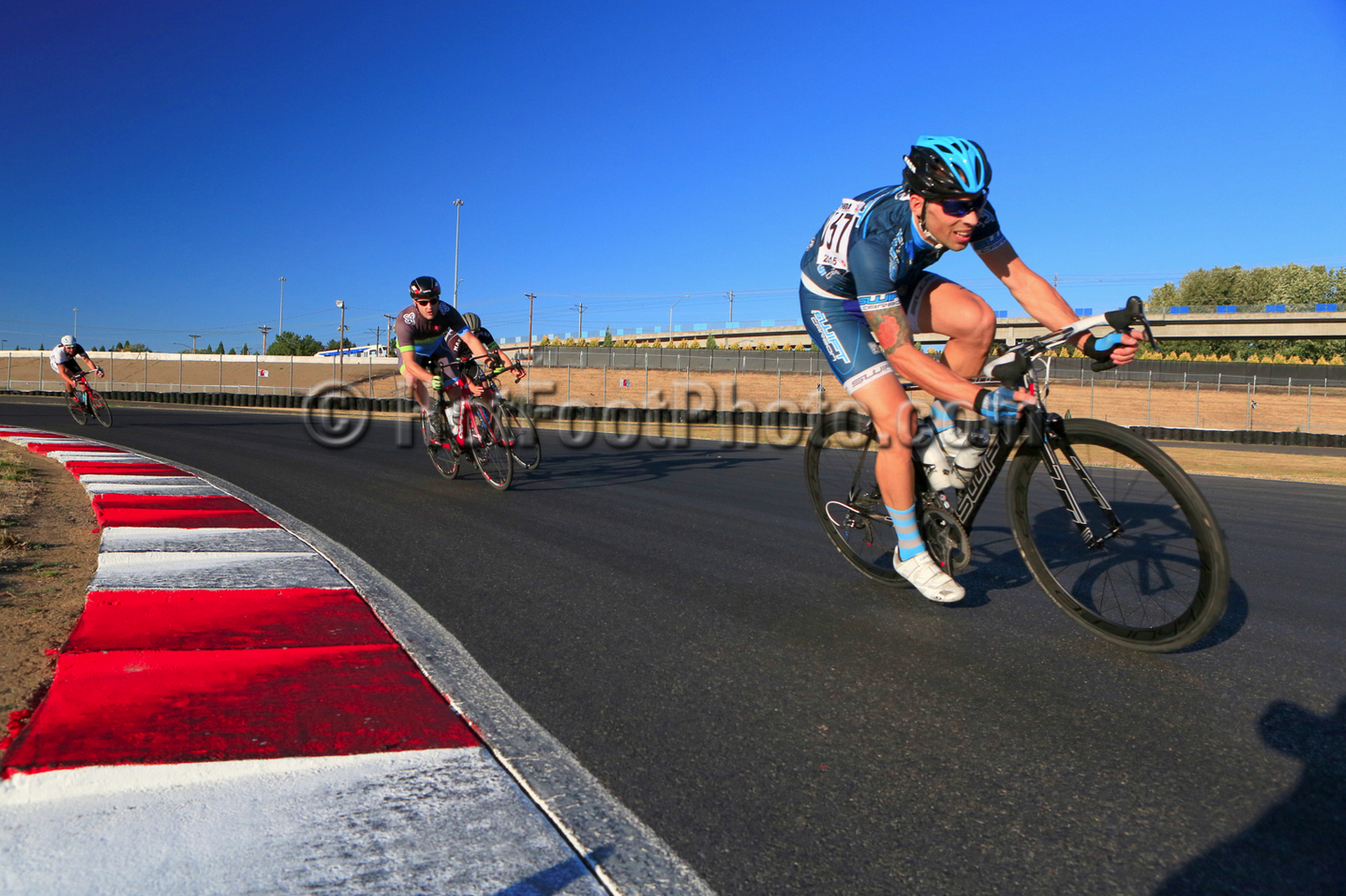 Above: Daniel in action (don’t mind the watermark). Click the image to see him winning the River City Bicycles Tuesday PIR Men’s 3/4 on 8/4/15.

With the crazy spring weather in Denver this year, I picked up a stationary trainer with Trainer Road and started riding as often as I could before I started riding outdoors with Strava in early April. Before long, I drove down for an extended stay in Oklahoma to compete in our annual company BBQ and train with some of the other InterWorks cyclists. With just around 600 total training miles before we started, I was very nervous about my ability to complete Freewheel with my friends. While I wasn’t able to keep up with the fastest team, Team Mechanical, I actually felt like I did quite well despite my initial fears. If you want to try and complete an event like this, there are plenty of resources out there to get information about how to train. I can promise you’ll be happy you did. Below you can see my training routes on the Cherry Creek and Platte River Trails in Denver, Lake Hefner in Oklahoma City and some random routes around Stillwater and Edmond. 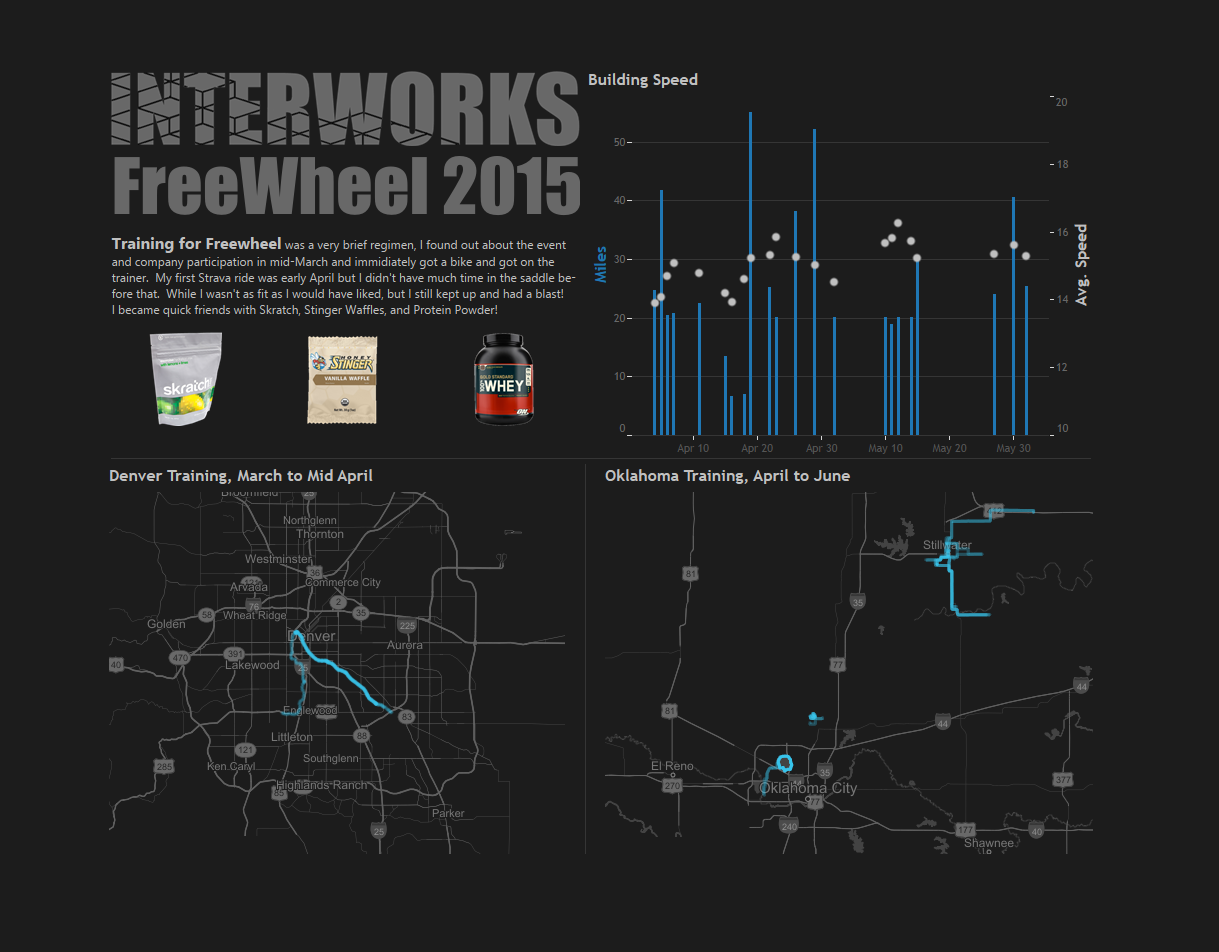 Above: Training routes and stats.

Whether we were ready or not, it was time to kick off Freewheel, so we packed into trucks and SUVs, loaded up our InterWorks trailer and rolled out en masse from Stillwater, Okla. Once we arrived, we had an easy ten-mile round trip to the Texas border from Hollis, Okla. When we started on Day 1 (the border trip was Day 0), we set out at 7:00 a.m. thinking we’d be the first ones out of camp. Turns out, there was a reason camp was practically empty by the time we started rolling at seven. We started with a tailwind heading east on mostly flat, Western Oklahoma plains, which were made unusually green by the heavy May rains. Before too long though, we had to head due south into the wind just as the morning cool was disintegrated by the scorching Oklahoma sun.

We survived though and steeled ourselves to wake up and start earlier the next day (we ended up starting earlier and earlier as the week went on to dodge the increasing heat). By Day 4, the long days in the saddle were starting to take their toll, but we fought through minor injuries, mechanicals and the elements to rush for the Coke diesel that our in-house legal counsel had for us in camp each day. Most of us ate everything we could find, consuming as many thousands of calories as we could stand so we’d be able to start again the next day. Below is a Tableau viz of our daily routes, team stats and the daily fastest time.

Despite the grueling pace we inflicted on ourselves, every single one of us absolutely loved participating in Freewheel, and we look forward to participating again next year. If you’re thinking about Freewheel specifically, don’t worry about the time you post (you’re the only one keeping track), but be ready for some heat and sitting down on your bike for hours a day. Make sure to at least wear cycling shorts and apply plenty of Chamois Butt’r! The Freewheel staff did a super job providing route info, and the support along the routes was plentiful. We had tremendous support from friends, family and co-workers throughout the event. From schlepping people to odd corners of the state to our legal counsel setting up camp for us each day, this event was further proof of why InterWorks is the greatest place on earth to work.

Visualization Practice & Solutions Lead
Twitter
Google+
LinkedIn
2021 Tableau Fantasy Football Draft Kit Welcome back to a 100% definitely nothing bad is going to happen year in professional football! Last year’s uncertainty didn’t ...
2020 Tableau Fantasy Football Draft Kit While 2020 has hardly been the year anyone could have predicted, sports, uh … finds a way. The NFL is the first major sports league to ...