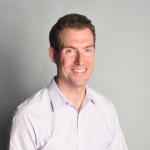 A couple weeks ago, I came across a College Football Playoff blog post that mapped the distance of each team’s campus to each player’s hometown. While detailed and visually appealing, you could not interact with the map – making it impossible to do more detailed analysis. This inspired me to create a Tableau dashboard that would present the same information but give the user the ability to filter the visualization to show what is important to them.

First, check out the visualization. After that, you can see how it’s made. Here you go:

The purpose of the visualization is to show which team has logged the most miles in recruiting. To show this, I needed some way to calculate the distance between two cities. I racked my brain and recalled a project I had worked on that used a formula to calculate distance between cities. I found the formula and knew it would work if I set up the data set correctly.

One caveat about this distance calculation is that it’s just the straight-line distance between two cities, not the driving distance.

After downloading it, I joined it to my players data set on City. There were a of couple cities not in the data set, so I got their latitude and longitude from latlong.net. Next, I needed to create a path_id field so I could use the Line mark type on the map in Tableau. You could have done this manually but, I decided to download the data set as a CSV and used JavaScript to create the path_id for each row. The last thing I did to the data set was split out the city and state from the Hometown field. I used the MID() and FIND() functions to achieve this.

NOTE: Ohio State does have one player from Australia. I purposely left him out of the data set for two reasons:

Thanks for stopping by. I hope you enjoyed interacting with my dashboard and found some interesting info, such as Ohio State having 64 more recruits from Ohio or Oregon having 848 more total miles than Ohio State.

If you have any questions or comments, don’t hesitate to use the comments section below.

Are You Younger Than 50? Then Invest.
Reflecting on 10 Years as a Tableau Gold Partner
Maximize Tableau Conference 2022 with the Strategic Session Picker
Visualizing the 2022 Gartner BI Magic Quadrant in Tableau
Visualizing PGA Tour Data in Tableau: Drive for Show, Putt for Dough

Analytics Consultant
2015 CFP Championship: Calculating Recruiting Distances in Tableau A couple weeks ago, I came across a College Football Playoff blog post that mapped the distance of each team’s campus to each ...
What’s New in Tableau 8.2 – Visual Data Window With Tableau 8.2 now available, the InterWorks team wants to give you an in-depth look at some of our favorite new features. Our What’s ...