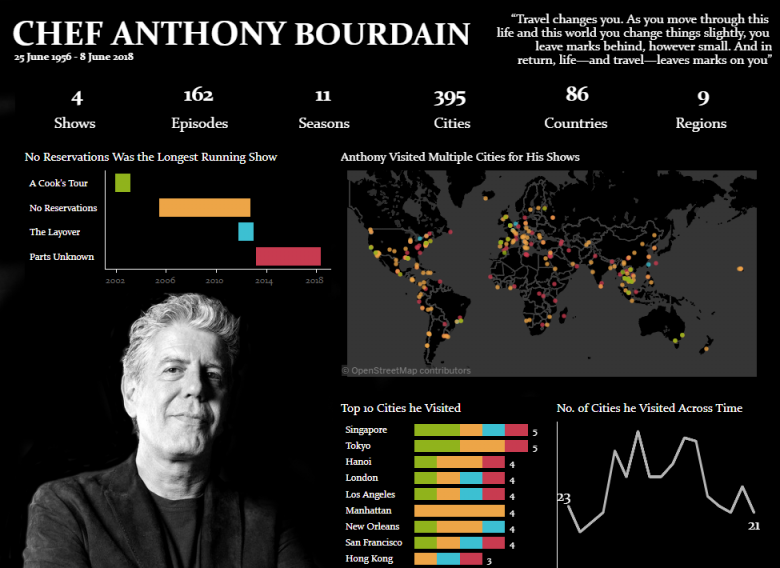 For the rest of 2018, I have made it my goal to produce more Makeover Monday visualisations. I’m always trying to develop my skills, and an area in which I’m keen to improve is the design aspect. My goal is to make beautiful visualisations!

Last week’s (week 33) Makeover Monday dataset was about Anthony Bourdain and the places where his shows took him. Tragically, Anthony committed suicide on June 8, 2018, when he was in France filming his latest season of “Parts Unknown.” Anthony was a fantastic chef and through his TV shows and books, he shared a love of food, culture and travel with his audience.

This dataset contained information about Anthony’s shows and the places he travelled. Using a Gantt chart, I thought this would be the best way to represent the runtime for each of his shows. Looking at this view, it looks as if he was very busy in 2011 and 2012 as there was an overlap of when “No Reservations” and “The Layover” were aired!

Next, I created a map as an easy method to quickly visualise the locations he visited for each of his shows. It’s no surprise that he visited the most cities (258!) in his longest-running show, “No Reservations.” It was only in “Parts Unknown” that he visited every single region at least once, including Antarctica!

Next, I wanted to see the top cities he visited in his shows. The first three cities are all in East Asia. Can’t argue with that as the food is incredible in those places! Finally, I added in a time series to see how many cities he visited across time.

For the colour choices, I actually just used the Tableau default Summer palette. I thought that the colours stood out well and worked against the dark background of the dashboard. Hope you enjoy my viz!

Analytics Consultant
LinkedIn
Bound for Berlin: InterWorks Awaits Tableau Conference Europe 2019 It’s nearly that time of year again! I am really looking forward to Tableau Conference Europe 2019 this month! Soon, I’ll be flying ...
Travel Made Easy with Tableau Calendar View Planning a holiday can be quite stressful in its own right. However, when I was planning a recent trip to Asia that involved making ...