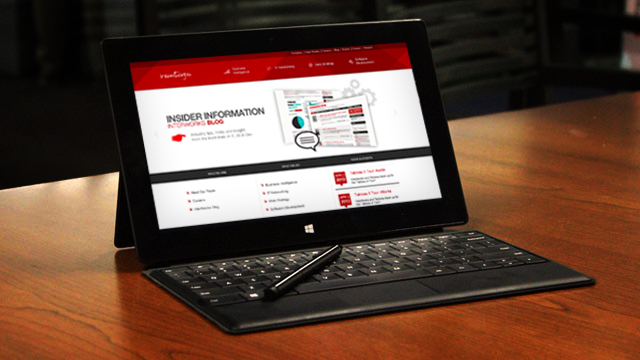 I’ve been testing the Microsoft Surface Pro for about a month. I’ve had many coworkers and clients ask about its capabilities. I didn’t go to the trouble of weighing things (using a stop watch to test boot speed, etc.). This blog post is therefore subjective – from a guy that has carried a laptop and a flurry of mobile devices for many many years. Beware: I’m a speed freak. My biggest concern usually is speed, or lack-thereof when reviewing new products.

I’ve got the 128 GB version, and purchased a keyboard cover with it. Not to be confused with the touch, but rather  the “Type Cover” ($129) which has mechanical keys, and a small trackpad with integrated mouse buttons (part of the trackpad). The surface has held up pretty well, even though I haven’t put any kind of screen protector on it.

The surface is a good weight for carrying, but it definitely out-hefts my Kindle Fire or an iPad, etc. That being said, it’s far lighter than carrying most business laptops. Mine is usually slung in my backpack, but the Microsoft Surface Pro has been great to carry to meetings. This usually sparks one of the biggest questions I’ve heard: “Can it replace a laptop?”

Can It Replace My Laptop?

The answer is yes and no. Could it replace my laptop? With two large hard drives, maxed out with RAM, and the best proc money can buy… No. That being said, for the average laptop user, it could be a great replacement. Although, using a pen-based device in lieu of a regular laptop can also take a little getting used to. I’ve gotten pretty good swapping between the touch-screen, the pen, and the Bluetooth mouse. Overall, it’s fast and it’s got a decent amount of space for apps and docs. Finally, it’s light and it runs every application that I’ve thrown at it: Office 2010, Shoretel Communicator, Google Sketchup, VMWare desktop, etc.

Should everyone buy a Microsoft Surface Pro right now? There are some things to consider. First, with performance settings maxed out, battery life suffers. If you typically tweak your “power saving” features for max performance, you’ll likely see 3-ish hours untethered from the power supply. Leaving the settings at default extended my unwired time to 6-ish hours, almost doubling. (I know, pretty crazy.)

There is also the fact that the track pad is, well, a track pad. Not my favorite pointing device (but I hate the kind that integrate the mouse buttons into the actual track pad). I prefer separate mouse buttons. About the keyboard; this is NOT an accessory, it’s a requirement. While I did occasionally use the on-screen keyboard, it would be very hard to use beyond answering a quick email, or typing a small url.

Most importantly: on a desk, the Surface is very easy to use as a laptop. On an actual lap, though, it’s impossible. It does not balance well with the stand, even with the keyboard attached for stability. I find that when working from home, it’s much easier to balance it on the arm of the sofa, which is a little less comfortable than propping it up on my lap. This also brings into focus the fact that the screen uses a pretty tight resolution. I’ve got pretty solid eyes, and found the resolution fine, but some might need to lower the resolution. There is an option for an external display (VGAHD AV) which would let you connect to a monitor while at the office. That being said, I had no issues, but have not yet had a chance to try connecting an external monitor. I have connected both an external keyboard, and both a USB and Bluethooth mouse – all work just fine. With the right gear, it could easily be docked at the office, then grabbed for on-the-go meetings.

This brings me to another high-point. Boot times were great – faster than my full-size laptop. I rarely had to wait more than a few seconds from hitting the power button, to getting my desktop. As a matter of fact, speed was very good, even when having multiple apps open. If you’re a speed freak, you may notice it’s slower than some power models, but it was fine keeping up with posting articles into OneNote, Office document editing, email, Netflix, even rendering stuff within Google Sketch-up (though, this is where I noticed the greatest slowdowns).

Notes: An item I want to personally address – Windows 8 Pro. I’m a huge fan of Windows 7, Windows 8 is something of a jump since a lot of standard actions now being initiated by pen or finger swipes. This may take time to get used to. The jury is still out on Windows 8 for me, I don’t dislike it, but I find myself making “Windows 7” type shortcuts to do stuff you can do with a swipe in Windows 8. Probably just a comfort thing, but as mentioned earlier, every app I’ve run on my laptop that I’ve tried installing on the Surface has worked great.

In summary, I love the Surface Pro. It is definitely an awesome tool in the mobile warriors arsenal. In many cases, I think it could replace someone’s laptop. I haven’t tried running Minecraft or Diablo 3 on it yet, but when I do, I’ll report back, and you’ll know if it’s a TRUE laptop replacement.

Intro to Azure Functions and Snowpark: Populating Snowflake Control Tables
Configuring Azure Active Directory SSO for Snowflake
InterWorks Blog Roundup – May 2021
Quick Q&A: Why We Like Microsoft for Cloud-Based Productivity
Better, Faster, Stronger: The Power of the Cloud in BI