The InterWorld Cup: Who to Support in a World Cup Without the USA

The InterWorld Cup: Who to Support in a World Cup Without the USA 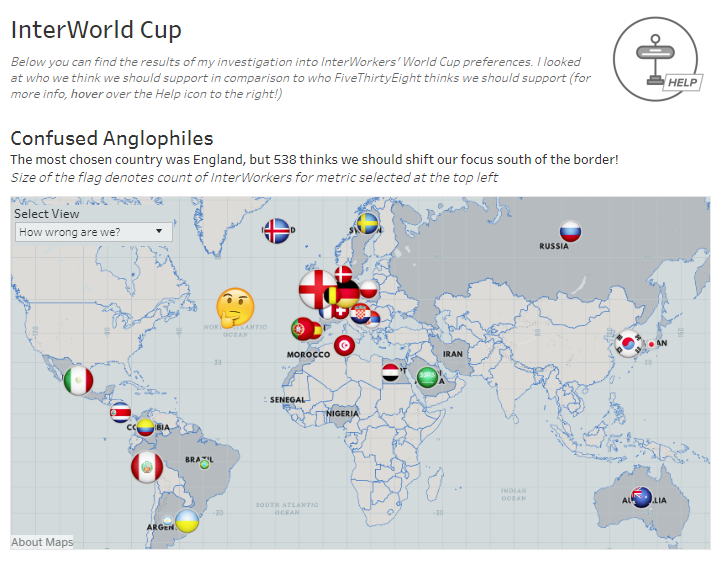 As the World Cup kicked off last week, some Americans may have been surprised to notice the lack of the Stars and Bars being represented in the games. Even if you are a bit more dialed into the soccer community and were aware that the USA did not qualify, you may still be having a hard time figuring out who to support.

There’s a Quiz for That

Enter FiveThirtyEight, a fantastic data-driven journalism site covering sports in addition to politics, science, pop culture and other topics that the variety of writers deem worthy of evidence-based investigation (may I recommend their feature analyzing 1,000 fortune cookie fortunes). I’ve never gone from so apathetic about a topic to so fascinated in such a short time. It’s well worth the read, as is the Twitter bot they built to generate fake fortunes.

Anyway, they recently published a project aimed at providing us lost souls with some guidance as to which colors to wear during the tournament. It asks you what kinds of traits you like in a team – offensive or defensive; underdog or favorite; “Goal!” or “Gooooooooool!”

I wanted to compare how these suggestions aligned with teams that my colleagues at InterWorks had selected themselves. For example, I like England as its comprised of a number of players from my favorite team, Tottenham. However, FiveThirtyEight suggested I look at Sweden, as I look for a well-balanced team that is more physical and has a shot to make a decent tournament run. I wasn’t the only one who was “off” in my selection. In fact, only one InterWorker supported the team he was suggested. What I found most interesting was the disparity between the popular teams and the commonly suggested teams.

See below for a breakdown of the findings.

As you can see, I wasn’t the only one who likes the Lions – they were the most popular pick (I’m sure this has nothing to do with us having a location there). The second most popular was the selection of “I choose match by match.” However, our top two suggested teams weren’t even chosen once! According to our friends at FiveThirtyEight, we should be looking south of the border at Peru and Mexico, along with everyone’s favorite 2014 underdog, Iceland.

Thanks to FiveThirtyEight for putting together a fun way to connect with my coworkers and generate a bit more attention around this year’s tournament! The first few days have been plenty of fun and I’m sure there’s more around the corner. Now come on England – and Heja Sverige!

Northeast Regional Lead
That’s a Wrap: SEAT Conference 2019 This past July, InterWorks had the privilege of attending the SEAT Conference in Daytona Beach, Florida. The conference is geared for ...
Debriefing My Trip to Dataiku HQ Recently, David Siegel, Rachel Kurtz and I spent the day with the team over at Dataiku HQ in New York to learn about the platform and ...