Over the course of the past year, I’ve combined my love of genealogy with an increasing interest in data visualization. I’ve long had an Ancestry.com account, but I always wanted a more visual representation of where I came from. Cue Tableau. After working in short bursts throughout the year, and with a fair amount of help from the InterWorks team, I finally finished the project out. It’s not that it took a long time in and of itself, it’s just that life happens and I kept shelving it. So, I’m pleased to release my genealogy viz today! You can interact with it below and then read the full story of how it came to be below that. Enjoy!

When it comes to existential questions, few compare to: “Where do I come from?” Just about everyone has asked this question at some point in their life – the endless number of books, movies and TV shows centering around it are proof enough. We all come from somewhere, after all, and it’s only natural to want to find out where that is.

Why this is important is another big question beyond my paygrade, but for now let’s just boil it down to the fact that our individual identities are shaped in part by where we come from. And who doesn’t want to learn more about themselves?

What Most of Us Know

Generally speaking, most folks (at least in the U.S.) have a vague idea of their heritage. We know who our parents were, who their parents were and the basic stories of how they got where. We’re also very aware of things like race, national identity, state identity and even community identity. We’re often told things like “you’re Southern,” “you’re Scotch-Korean” or “we’re pretty sure there was a Cherokee princess in our family wayyy back.” Ok, maybe that last one is unique to Oklahomans. But where things get hazy for most is when we start reaching further back into time past our great-grandparents and beyond.

If you’re lucky, like my family is, then you’ve had at least one person in each generation strive to preserve these records for the next generation. The truth is that keeping family histories, usually in the good ole family Bible, was pretty commonplace up until the modern age. Now, you’re fortunate to come across such a treasure trove of family lore. But not all is lost.

Thanks to the magic of the internet, specifically Ancestry.com, we’re able to access the records of countless other people from across the globe in addition to census, birth and death records. They’ve built a thriving online community of genealogy nuts, and we’re seeing the interest in family heritage take an unprecedented leap. That brings me to yours truly.

It Started with a Merit Badge

Aside from oral family histories, I didn’t start digging into genealogy until I took the Genealogy Merit Badge in Boy Scouts. I remember it being one of the first badges I completed, and it required me to fill out a family tree (on paper, mind you). Thankfully, my parents had done a good bit of genealogy themselves and had some great resources saved. This largely included names and birth places of relatives I had never even heard of as well as a bit of other biographical information. But I still needed some more information on my dad’s side, so he put me in touch with the family record keeper: my great-great-aunt Rosie.

I began writing her letters to her home in Boston asking for more information. It was just my luck that she had gone blind in her old age (a whopping 102 at the time), but her daughter read her the letters. She was thrilled to have someone to talk to about family history and provided me with stories and information that I couldn’t have come by any other way. You’ll be happy to know that I got my Genealogy Merit Badge (and eventually the rank of Eagle Scout), but I was hooked on family history for good. 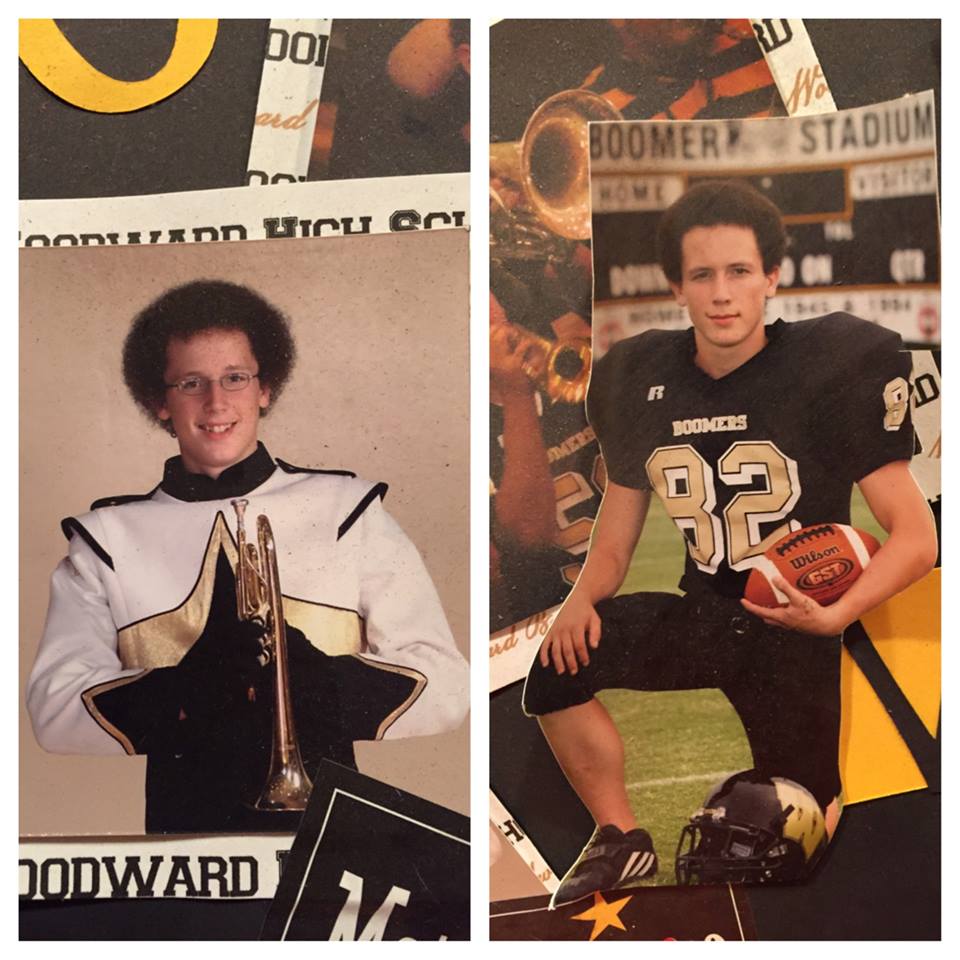 Above: One of the great family questions, “Where did that hair come from?!”

Though my attentions turned to “other” things in my teenage years, I still carried the torch of family historian. It wasn’t until college that I really added some fuel to the fire when I finally created an Ancestry.com profile and input all the information my family had. Not only that, I began utilizing the internet search skills inherent to every Millennial for the purpose of family research. I soon found what a wealth of information there was out there.

After a few days of tireless perusing of census records, user forums and other online resources, I had confirmed our existing records and made incredible progress beyond them. Before this, only a few lines on my mother’s side stretched beyond 1800. Now, new lines were being revealed with each click, some stretching back well beyond 1600. And the stories!

Since then, it’s remained a casual pursuit. Every now and then, I’ll spend an afternoon or evening looking to fill out new lines, but I’ve gotten to the point where I’ve gone about as far as I can with the information that’s currently available/searchable online. I got to feeling pretty good about myself with all the information I had amassed, but I still wanted to know more.

It wasn’t until I picked up Tableau at work about a year ago that an idea came to me: Why not take the data I had and look at it in some new ways? For so long, I had grown accustomed to analyzing genealogical data in the standard family tree format. I generally knew which lines originated from where, but I had no idea what the whole picture looked like. The answer was simple: Put it on a map. 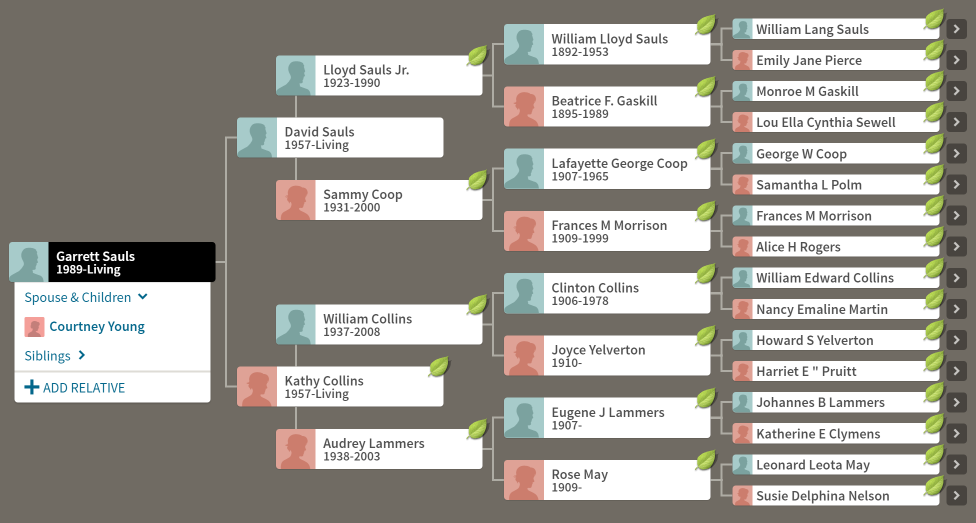 Above: The standard view of an Ancestry.com tree.

What a revelation! I finally knew a way in which I could take years of hard-found data and create a beautiful illustration of where my family came from over time. Only one tiny problem: I had no idea how to use Tableau. But what are the odds that I happen to work at the best Tableau consulting firm on the planet? After taking an internal Tableau Fundamentals class and going full little brother in bothering countless coworkers who knew Tableau well, I was on my to bringing my map a reality. Thanks to their help, I was able to build the bones of the viz and really see it come to fruition.

Of course, life happens, and I put off completing the viz for about another year. Since then, I’ve created two Tableau vizzes on Tableau Public, but I’ve learned some things along the way that have helped me make this much better than I would’ve a year ago. In hindsight, it was pretty simple to create. I went through all manner of potential wrinkles, but I defaulted back to something simple. I started by downloading the data into a GEDCOM file from my Ancestry account then converting that GEDCOM file into an Excel file. I spent most of my time on this viz cleaning up that data in Excel and adding additional fields that didn’t exist on Ancestry for a little extra flavor. The rest is straightforward map building in Tableau.

Above: The GEDCOM data plus some new fields in Excel.

As far as interacting with the viz goes, aside from the instructions listed on the viz itself, there are a few other things worth mentioning.

What I Learned Along the Way

Genealogy is a constant learning and relearning process, so this whole process has been non-stop discovery. Some family assumptions have been verified, others have been challenged. The best part was that I uncovered so many great stories from so many unique individuals. Perhaps most surprising of all, I learned how little I actually know about my family beyond a certain point. That Unknown percentage gets pretty outrageous after about Generation 7. Did I mention that I’m one of the lucky ones?

Being of predominantly white, English-speaking heritage, I appreciate that genealogy is much simpler for me than others. The truth is that for many, the records don’t even exist. I experienced a taste of this when trying to track down potential Native American and African American heritage. It was pretty much impossible, save one court ruling concerning Mississippi Choctaw citizenship and actual genetic testing via 23andMe (grain of salt there). My point is that genealogy can be just as frustrating as it is rewarding. I won’t even hazard at how difficult it must be for adopted or fostered folks. 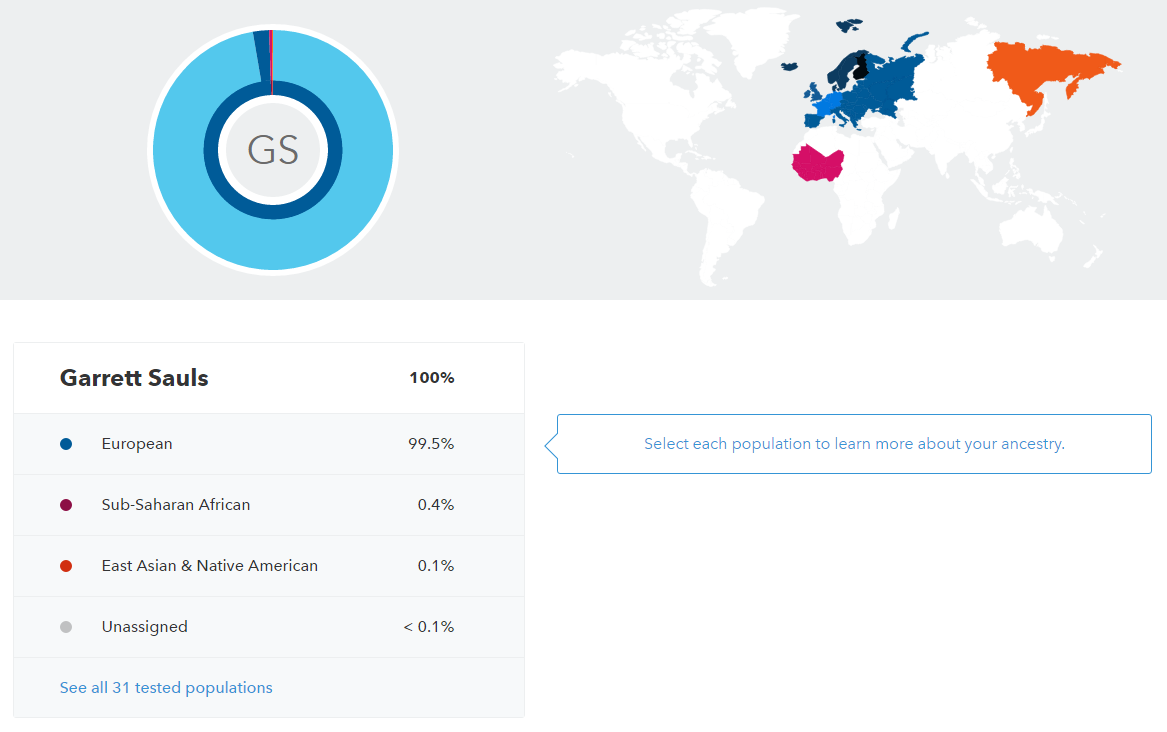 Above: My genome data from 23andMe. Mostly European (surprise), but some interesting smaller bits. Might explain the hair. 😉

Personally, this is a big step in a pursuit I’ve been after for a long time. It was a blast to see it come together, and I still have much work to do. My journey in understanding this data has been eye-opening. Even as Anglo as I am, I’m amazed by the sheer scope and diversity of individuals found in my family tree. One needs only dive back a few generations to see that our identities are rarely as generalized as we make them out to be. This is crucial in a time when racial, national, religious and political identity have reached a boiling point. Then again, I suppose history would tell us that this is ALL the time. So, with this knowledge in hand, perhaps we can show a little more empathy, because there’s a good chance that somewhere down the road, we’re family.

Special thanks to the entire InterWorks Viz Lab (especially David Duncan) for their invaluable feedback as well as Dustin Wyers and Ben Bausili for some filtering help. Thanks to all the relatives online who have provided such valuable information to make this possible. Finally, thanks to my family for being such staunch record keepers and family historians. I know my great-great-aunt Rosie would’ve loved to have seen this .. well, if she could see.