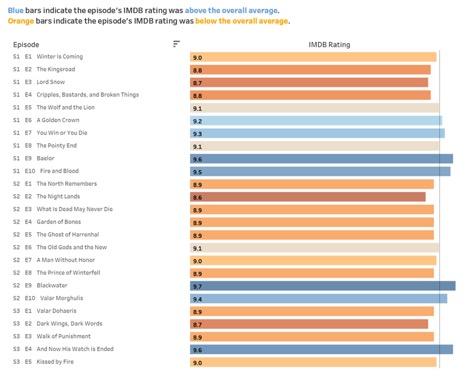 As the masses flock to their couches to re-binge-watch all the episodes of Game of Thrones, salivating for the final season like a pack of ravenous wolves, add this dashboard to your meta nerd repertoire.

I Drink and I Know Things

When the wine starts flowing and your friends finally take a break from preaching their favorite plotline conspiracies, it’s your moment to shine: “Did you know the first episode of every season tends to be among the lowest rated on IMDB?” Your question will linger in the air like the scent of stale Cheetos. Queue the sad trumpets as everyone’s balloon deflates … but, really! The data doesn’t lie. Take a peek at one of the visuals from the dashboards below:

Above: Data sourced from Kaggle

Now, let’s not be dramatic. The lowest-rated episode (Season 5, Episode 6: “Unbowed, Unbent, Unbroken”) still stands at an impressive 8.1 on IMDB, according to this dataset. That’s not bad by any means. But where’s the fun in shying away from dishing out a little tough love? We’re fans of the show, and sometimes it’s fun to stack episodes against each other. Turning the frown upside down, look how good the last couple of episodes tend to be! Sometimes you need to build up that story base at the beginning of the season, so the later episodes can come out swinging.

Which Episode Takes the Iron Throne

The average Game of Thrones episode rating stands at an impressive 9.1. The spirit of these dashboards is to help you see the information about the series in a convenient way. I didn’t want to bake in any opinions or focus on the plot—there’s plenty of that out there already. I just wanted to build a tool that lets us take a step back and consider the show itself. As you can see in the screenshot below, this allows us to get a feel for what people liked the most along the way:

Above: Biggest winners early in the show appear to be Ned Stark’s execution (Baelor) and Tyrion’s defense against Stannis (Blackwater)

Until I stumbled upon this dataset, I didn’t realize how much I was missing having this Game of Thrones tool at my fingertips. I’m the annoying friend who points out, “Ooh, see that?! That didn’t happen that way in the books!” I promise not to be that person this season, friends. We’ve been in uncharted territory for a while now, as the most recent book was released in 2011.

Looking back, you remember the Red Wedding, don’t you? It might surprise some of you to know that in the books, Catelyn Stark transformed into Lady Stone, a zombie-like version of the Punisher, ruthlessly dispatching her enemies around the riverlands. Also unique to the books, Daenerys has a badass bodyguard named Belwas who eats an entire bowl of poisoned locusts meant to kill her (because he likes to snack), and he’s mildly inconvenienced by a tiny bellyache.

You Do Know Something, Jon Snow

My point is this: I like Game of Thrones, I enjoy talking to other people who like Game of Thrones, and I appreciate the series enough to want to know more information about the series itself. Which episodes did people like the most? Which director is associated with the best-rated episodes? Why was Battle of the Bastards the ‘most voted’ episode in the series? Okay, we know the answer to that one … because that episode was amazing. These are the fandom rabbit holes your mind might tumble down as you sift through these dashboards.

This metadata interests me, and maybe it interests you, too. That’s why these dashboards exist. You can dissect the show by its ratings, hover on elements of the dashboard to get extra information about the episodes and who directed them, view trends over time and just generally be an enabler to your inner Game of Thrones nerd.

I hope you enjoy playing with the dashboards and that they bring you a little extra joy heading into the final chapter of this awesome series!