InterWorks
×
Contact Us
BACK TO TEAM
Scott Siemens
Lead Web Developer
Facebook
Twitter
LinkedIn
Email
Hailing from Wichita, Kansas, Scott was blessed and cursed with a never-ending craving, and a strict daily diet, of pizza and tacos. As he got older, his diet became stricter, but his love for new experiences grew.

In 2004, Scott's band signed a small record deal and was fortunate enough to begin touring the country playing shows. Shortly after the band threw in the towel, Scott went back to school and received his degree in recording arts and studio production from Berklee School of Music. He then followed that up with a record for the largest handmade igloo in south central Kansas, along with a degree in web development from Fort Hays State University.

When Scott's not out scavenging for a new pizza joint, you'll find him playing guitar, mixing in his studio, writing YouTube parodies with his wife or working on all kinds of web-oriented projects. He just wants to have a good time, all the time! 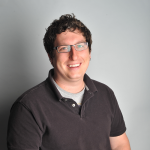