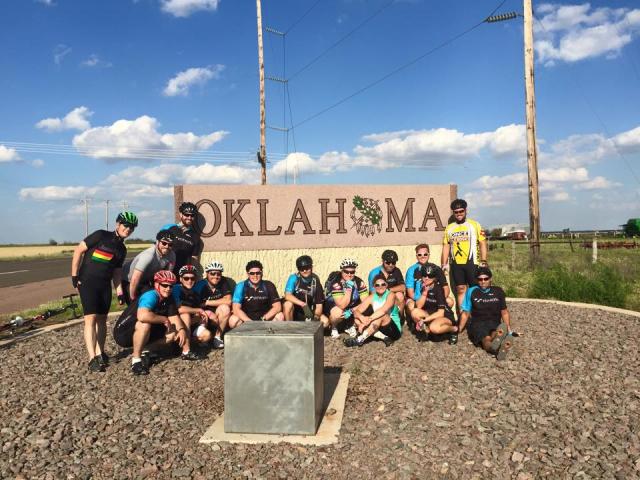 Above: Team InterWorks at the Texas/Oklahoma Border.

We decided to ride our bikes across the state of Oklahoma. This in itself is a momentous feat, but I am riding my bike on gravel roads. “Why is this a thing?” I ask myself when the temperature soars to over 90 degrees and the dust accumulates on any remaining moisture my body is willing to relinquish. Just a few years ago, it was NOT a thing. Gravel road cycling, or gravel grinding as it is often dubbed, is a phenomenon of the very recent past. I choose to think it grew out of the excitement mountain biking can provide and the inherent dangers of riding a road bike on a heavily trafficked stretch of asphalt.

I started because of my friends. I have been both a road and mountain biker for many years. I worked in several bicycle shops while in college and for a few years after. Cycling is a battery for me, almost never failing to bring me back to a full charge. About three years ago, a revolution happened in Stillwater, namely in the form of a new bike shop opening on Main Street. District Bicycles brought with it the idea of gravel bike riding as well as, and most importantly, an evangelist by the name of Bobby. Bobby spoke the word and the followers came in droves to try this new form of manual propulsion. When those I rode with drank the Kool-Aid, I gave it a try, and before l knew what hit me, I was firmly in the gravel’s grasp. 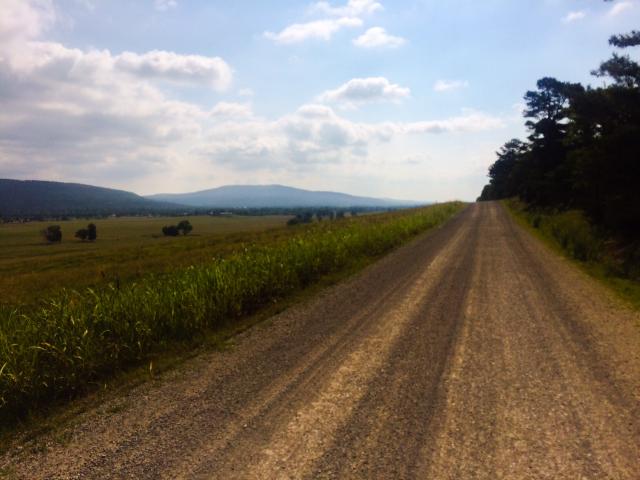 Above: A stretch of gravel road along the OK Freewheel gravel route.

For over 30 years, Oklahoma Freewheel, or simply OK Freewheel, has stood proud as a premier cross-state cycling tour. It does not have the numbers of some of larger events like RAGBRAI (The Register’s Annual Great Bike Ride Across Iowa) for example, but the diversity of scenery and ecosystems experienced as you travel across Oklahoma cannot be rivaled. This year, for the first time, (and for the first time on ANY cross-state ride), a gravel option was added. Of the 500+ riders that pedaled out of the small southwestern Oklahoma town of Hollis on Sunday, June 6, only 22 people opted for the gravel route. All things considered, the fact that anyone was willing to ride across the state on gravel roads is a testament to this growing segment of cycling culture.

When you decide to ride your bike on gravel, you also decide to be more self-sufficient. You come across fewer amenities on the gravel and even fewer people. Except for the occasional oil truck or farm vehicle, you can often ride hours without so much as a rustling in the bar ditch to ease your fears of being alone on this planet. On day one of Freewheel, I pulled down the digital maps of the route from the website and stored them on my phone. I reviewed the route and felt confident that I could handle the 70 miles to Frederick, the second stop-over town on our tour. Against my better judgement, I left my paper map and cue sheets in my bag that was being driven to the next town by our SAG (support and gear) truck. 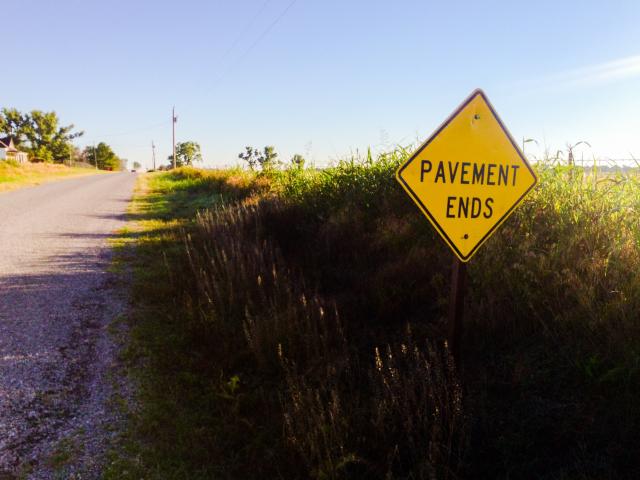 I joined the rest of the riders east out of town along the highway until the familiar tone of my phone GPS app indicated my turn. I proceeded south on a relatively nice paved section of road completely alone for another 20 miles and then took a second cue from my phone that I should turn back to the east. This zig-zag pattern continued, all on paved roads, for another 20 miles before I hit the first stretch of gravel. By this point, I was 54 miles into the day, and this was the first gravel I had seen. It only lasted for about two miles before the paved road returned. I made note of this and vowed to talk with Trevor, the race director, when I arrived at camp that night.

I continued pedaling, listening to a book on tape and marveling in the sheer lack of support or other riders. I knew the gravel group was small, but I kept thinking I should come across another soul, even a SAG vehicle. By this point, my water bottles were getting depleted, and I was starting to think about what options I might have should I run out of water completely. I did not have to think about this too long, as soon after, I took the last pull from my third and final bottle.

The sun was beating down, and Frederick was still about 15 miles away; I needed to get some water fast. In the distance I saw a house that materialized from the waving heat lines, much like a mirage in the desert. As I approached, I rehearsed the speech I would give to the home owner, undoubtedly not used to seeing a spandex-cladded nut-job clomping up their driveway begging for refreshment. As I got closer, hope drained when I realized this house was nothing more than a burned out shell of a home. It did not appear that water was going to come easy in this desolate part of our state.

As my mind started to drift into Bear Grylls territory, once again, a shimmering object appeared on the horizon. I had seen a sign a few miles back, but it had not fully registered in my delirious state. A church, Bethel Baptist, stood proud and strong, surrounded by treeless fields and windswept gravel. There were some cars in the parking lot but not enough to make me think there would be an open door. I searched the perimeter for a hydrant or hose, but the only one I came across had a padlock firmly denying access to the cool, refreshing delicacy hidden in its subterranean prison. 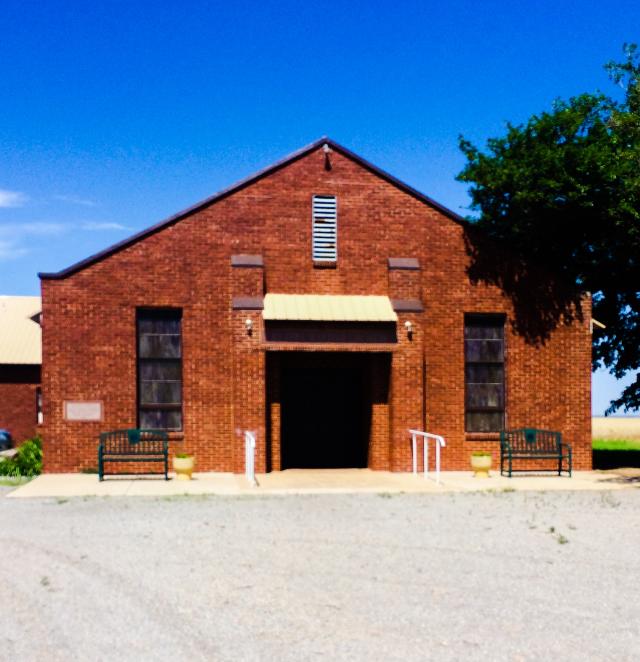 I started trying doors. There were three that I could see; the first appeared to enter right into the sanctuary. Attempt one: fail. The sanctuary door was locked tight. The second door I tried also did not open, but I could see that the catch was retracting when the handle was turned, so with a hard tug, I broke the door free of the jamb and, as if I was walking into an undiscovered chamber of gold, stepped directly into the kitchen of Bethel Baptist. I stood in the air conditioning, chugging bottle after bottle of water until my insides hurt and my eyes once again produced tears.

That little Baptist church may not have very many regular attendees on Sunday morning, but they did more for me that day than I could ever repay. When I returned to camp, I talked with the ride directors and determined that the route posted online was (obviously) not the right file. I can fault no one other than myself. Again, you submit to self-sufficiency when your venture onto the gravel. I did not have a paper map with me, and I did not have enough water for 70+ miles of riding.

As I sit here in the Lindsay public library, soaking in the air conditioning and the quiet, I am excited about tomorrow’s route. It is another 75 miles of tough terrain ending in Ada, the largest town on the tour so far. I don’t know what I will run into on the road; dogs, oil tankers or just some peaceful scenery. I do know that in the end, there will be a story, and we will all sit around tomorrow night weaving those into our already half-written novel of OK Freewheel 2015.

IT Lead and Training Coordinator
Twitter
Google+
LinkedIn
Walk This May: A Tableau Data Viz Throughout the month of May 2021, InterWorks and members of the Stillwater, OK, public were challenged to create teams of two-five ...
To Infinity and Beyond: The Power of the Cloud in IT As we hit refresh on a new month, new year and new decade, it makes sense for us to look back on the road that brought us to where we ...