Visualizing a Flood of Data for the Tableau 10x Contest

Visualizing a Flood of Data for the Tableau 10x Contest 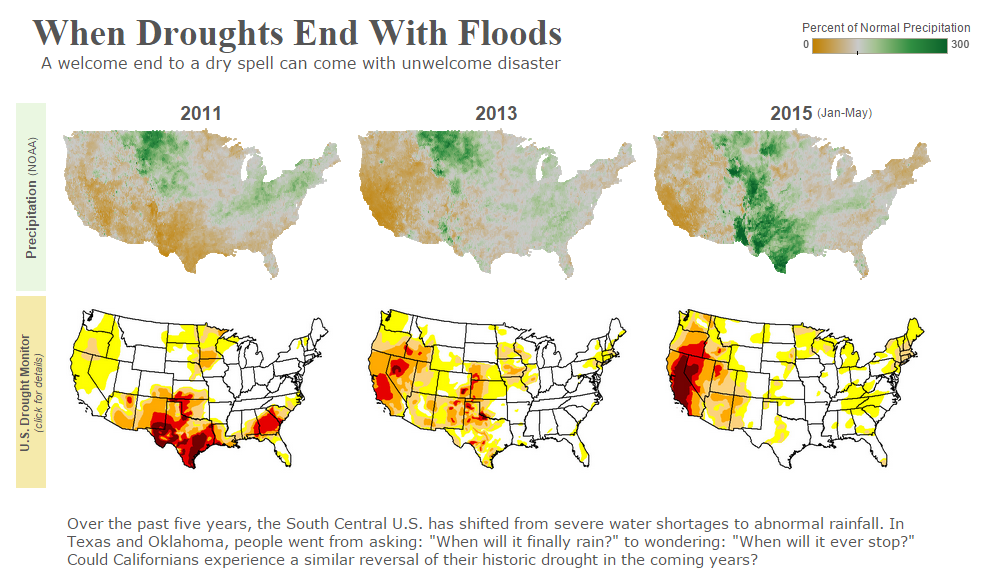 The recent floods in Texas and Oklahoma hit home for me. I live outside of Dallas and InterWorks has three offices in Oklahoma. We’ve seen double our normal rainfall this year, leading to major floods impacting metropolitan areas. People have lost homes and family members.

All of that comes on the heels of millions of people praying for rain over many years of severe rainfall shortages and shrinking lakes. This visualization paints that picture using 2.27 million points of observed precipitation for Tableau’s 10x Data Viz Contest.

Telling the Story with Tableau

It takes more than bars and color-coded maps to visually tell this kind of story. On-the ground footage helps us understand what it looks like to go from “deep red” on the U.S. Drought monitor to “dark green” on the precipitation maps above. Those hit by the floods easily recall the years of below-normal rainfall leading to water restrictions and other fallout from parched lands. I felt it was important to add that context for everyone else who would not so easily recognize the connection.

As a native Texan on the other side of a bad drought, I can empathize with those struggling with the same conditions right now in California. While footage of flood damage isn’t exactly a ray of sunshine, showing a reversal of the drought can remind them that these things don’t last forever.

I’ve found weather data in general hard to find and to work with. The best precipitation I could locate was from the Advanced Hydrologic Prediction Service from the National Weather Service. It provides a dense grid covering the contiguous U.S. but each measure is in a different file and files are split up by year. Furthermore, these files aren’t in a format Tableau can read directly. You can choose either a shapefile or netCDF, a format unique to weather data.

So, it was Alteryx to the rescue! I used that to read the shapefiles, combine them into one so I could trend across years, and assign each grid point to a state using spatial matching. Getting the same kind of detailed drought data was not so simple (if you can call this process simple), so I opted to show the official drought maps as static images below the precipitation maps.

The middle section of this dashboard appears and disappears in a way that leaves both views clickable. When I’ve seen this elsewhere in Tableau, usually the content on top is clickable but things underneath are not because they are covered up by an invisible container.

Here I employed a technique to overcome this problem which has many more useful applications like making filters appear and disappear or dynamically moving other layout elements based on user input. This will be covered in a future “how-to” post, so stay tuned!