We go to a lot of conferences here at InterWorks. From the Tableau Conference and other data conferences across the globe to Dell World and VMworld, we cover all the bases. As a full-spectrum IT and data company, it only makes sense to have a presence at events like these; it comes with the territory. But this year, we expanded our conference-going repertoire a little more. All teams at InterWorks, not just those who work directly with IT or data, had the opportunity to attend conferences of interest this year.

For the InterWorks Marketing and Web teams, that conference was Adobe MAX 2015 in Los Angeles, CA. For those of you don’t know, Adobe MAX is Adobe’s biggest annual conference. Adobe is responsible for making software like Photoshop, InDesign, Illustrator and much more. This conference is considered one of the world’s premier creativity conferences, and we were stoked to go.

Check out this slick video from Chris Armstrong for a quick recap, then read on to hear about our MAX journey in detail:

The Marketing team had been jonesing to go to a conference for some time. Seeing the fantastic experience our Business Intelligence team had at Tableau Conference each year, we thought maybe we’d get our go one of these days. Little did we know that something was already planned. That brings us to July of this year. It was a pretty normal day, but all of us were called into the Marketing office at our Tulsa location (where most of the MKTG team resides). We were instructed to close the door behind us. This instantly set off some red flags. What could be so serious that we all needed to gather in such secrecy? Did somebody quit? Are we all getting fired?! WHAT’S GOING ON?!? In classic dramatic fashion, Jenny Parnell, our Marketing Manager, lowered her voice and said:

After getting over the initial surprise that we all hadn’t lost our jobs, it registered: We’re going to a conference! Naturally, we all got giddy and proceeded to act like we were on one of Oprah’s famous Favorite Things giveaway shows. “YOU’RE GOING TO A CONFERENCE! AND YOU’RE GOING TO A CONFERENCE!” We were over the moon, and we immediately hit up our benevolent Dalton Parsons, our benevolent Marketing Overlord, to share our gratitude. We also found out then that the Web team would be joining us. The more the merrier! 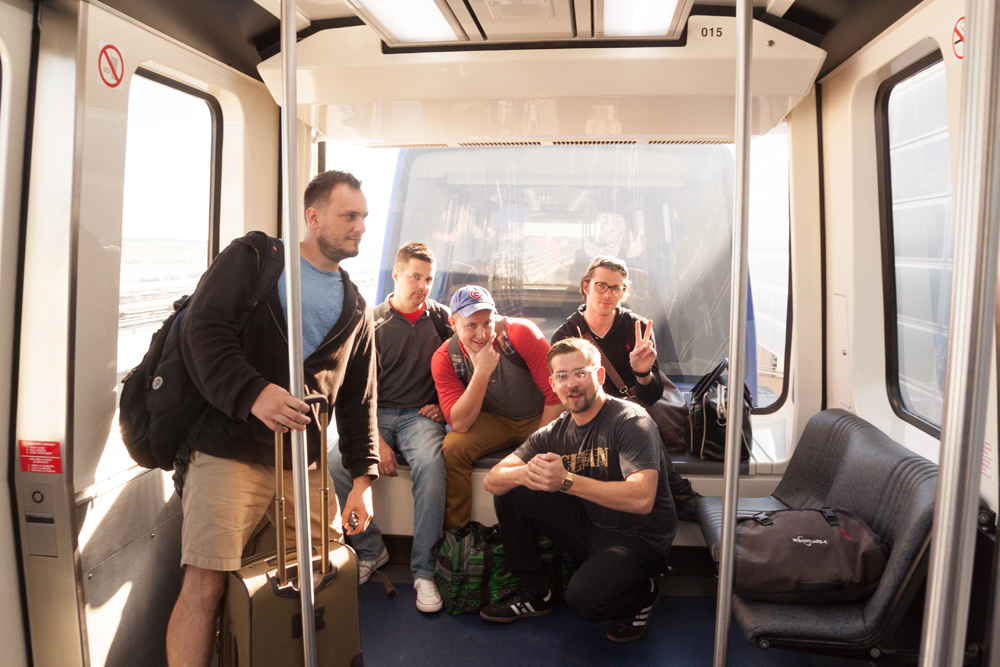 Above: Part of the IW Tulsa crew en route to LAX.

Fast forward to Oct. 4 – the week of the conference. 12 or so of us hopped on our respective planes (we’re scattered across OK, TX and KS) and headed to L.A. the day before the conference began. As you can imagine, excitement levels were high. The next morning, we kicked off the conference with the first general session. For the record, the Adobe MAX stage is all-time. It’s three-dimensional and displays projections like nothing I’ve ever seen. Whatever sorcery they used, it was impressive. 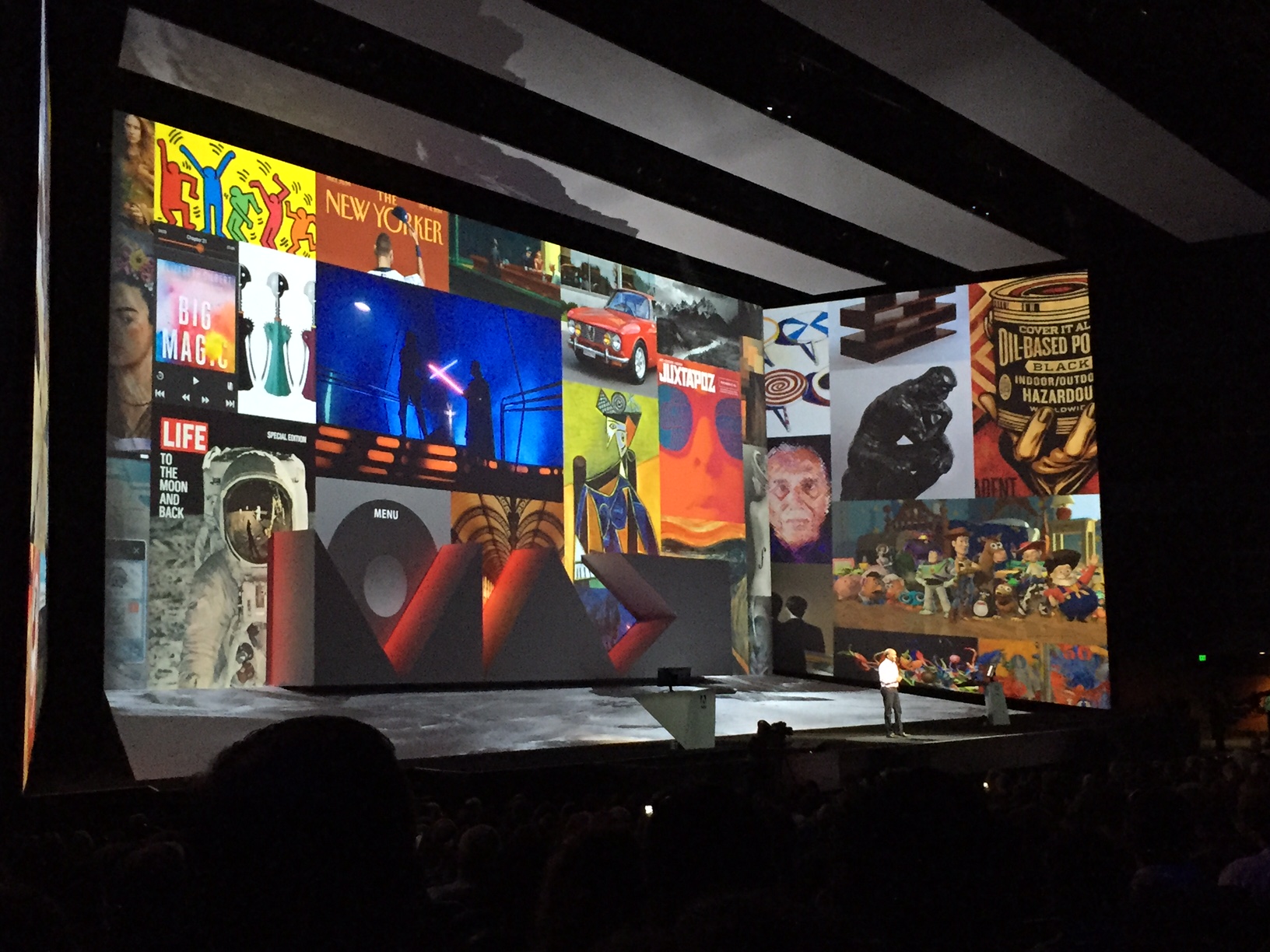 Above: The Adobe MAX stage. While not shown in this pic, those letters can take on independent projections. Rad!

The general session on Day 1 of the conference featured almost exclusively Adobe employees. Adobe CEO Shantanu Narayen kicked things off with a general “State of the Union” type of speech, focusing heavily on the idea of connectivity. From there, he conceded the stage to SVP & General Manager of Creative Cloud Bryan Lampkin. This is the part of the conference where Adobe announces all their new software features for the upcoming year. There were way too many improvements to remember, but the big ones included CreativeSync and a plethora of new apps designed with collaboration in mind. You can get the deets on all that’s new with Adobe here.

Another interesting portion of the opening general session was when Tim Miller, Director of the upcoming “Deadpool” movie, joined Lampkin on stage to talk about creativity. Attendees got to hear about his creative process and even saw an exclusive sneak peak of the movie. Wicked, right?! Oh, and another cool thing about the Day 1 general session? They announced that all attendees would receive a FREE camera valued at close to $1000. CHA-CHING! 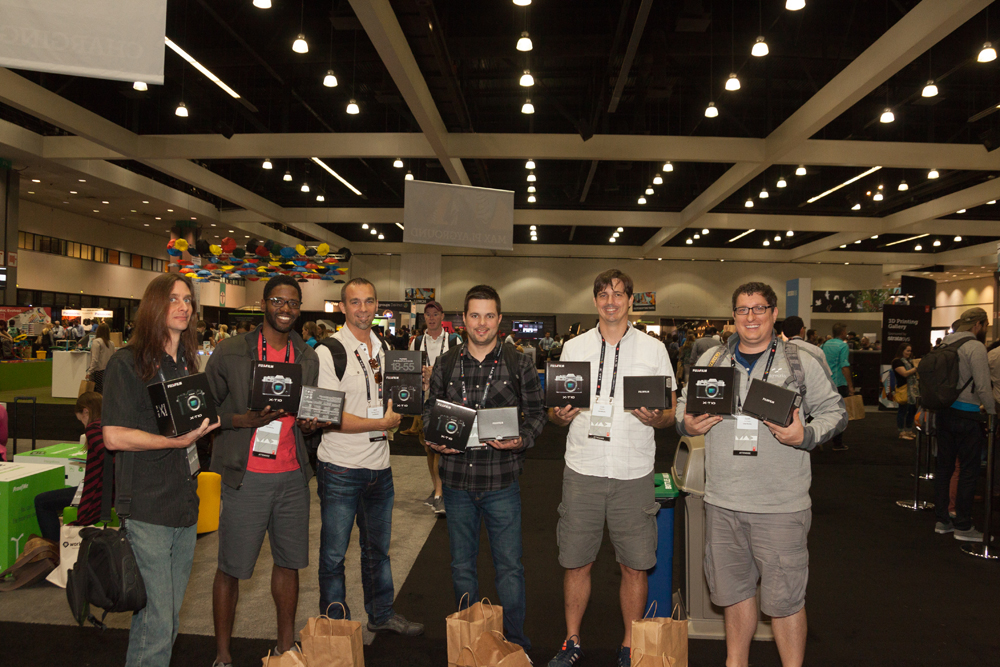 Above: Part of the crew snatching up their free conference gifts.

The general session on Day 2 focused more on the creative process as opposed to specific products. This session featured a number of creatives from several different disciplines who focused largely on their personal creative journeys. These speakers included Maira Kalman and Elle Luna, both of whom are artists and writers, as well as filmmaker Baz Luhrman (“The Great Gatsby,” “Moulin Rouge” and “Romeo & Juliet”) and the crowd favorite, Brandon Stanton (founder of “Humans of New York”). You can listen to their presentations here. 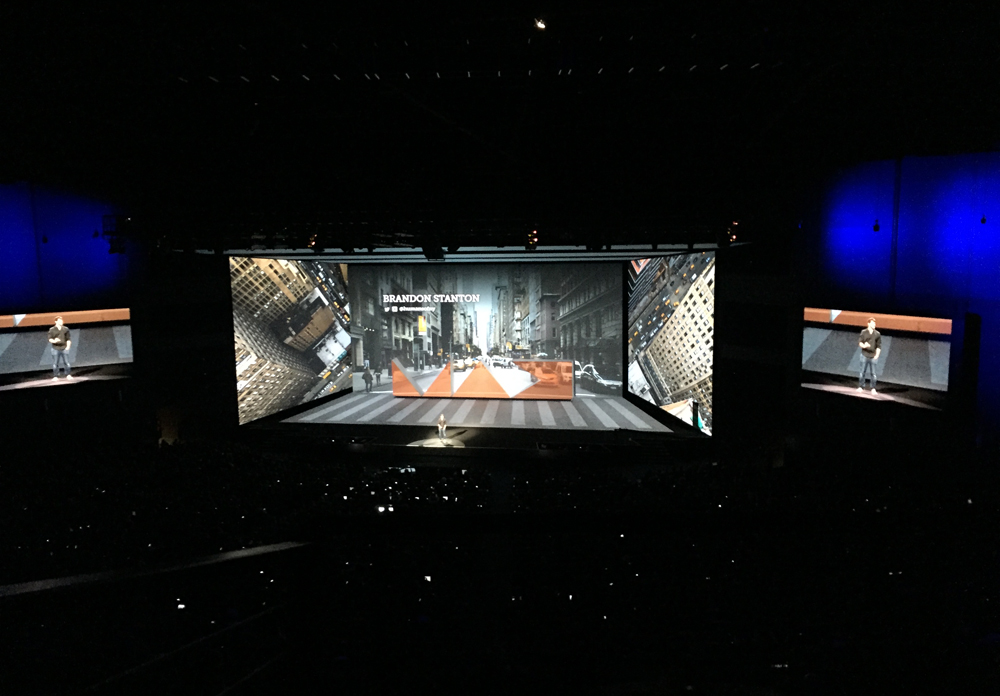 Above: Brandon Stanton of HONY presenting.

Now we get to the meat of the conference – the sessions. Since we brought such a diverse crew of people, including designers, developers, photographers (don’t forget the content guy ;D), we had an equally diverse slate of sessions picked out. Each person chose their own schedule, but we inevitably wound up in a few sessions with each other. 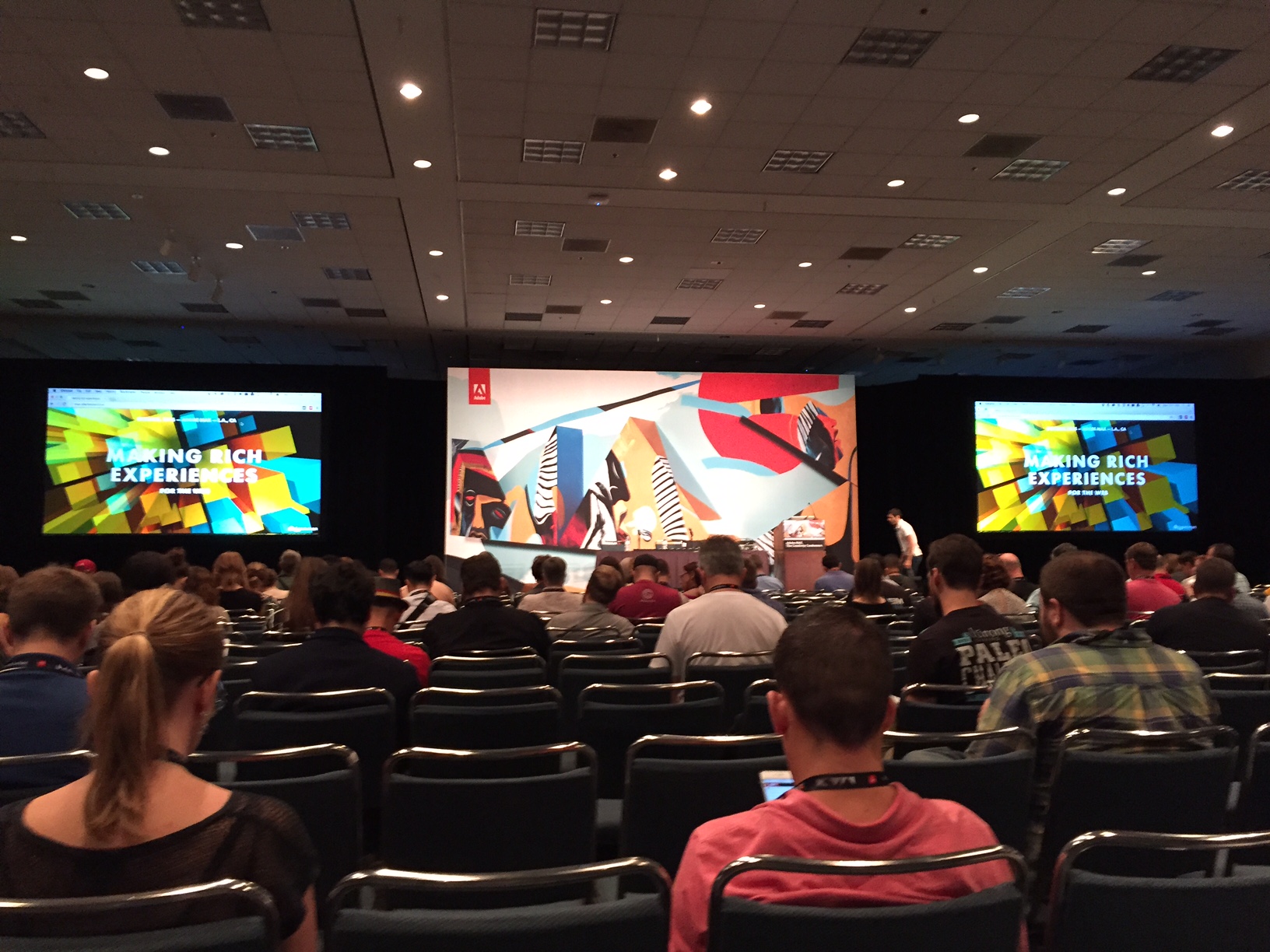 Above: One of many breakout sessions at Adobe MAX.

Most of us chose sessions that fell in line with our disciplines. Jacob and David, our two graphic designers, went to quite a few Illustrator and motion graphics sessions/labs. Our web guys went to more development-oriented sessions. Chris and Clinton, our video/photography dudes, checked out some video editing and Photoshop sessions.

Personally, my session selection was probably the most eclectic given my job title. Adobe certainly has something for everyone, but it’s predominantly geared towards visual creativity. Since I work mainly with words, you can see my conundrum. Nevertheless, I found several solid sessions, most of them centered on the creative process as opposed specific skills or tools.

Look. Learning is hard work. Adobe gets this. As such, their receptions and after parties were off the chain. Following the first day of the conference, Adobe held a two-hour welcome reception in their Expo Hall. This included free drinks and copious amounts of delicious free food. The real attraction, however, was the Expo Hall itself. Here’s a glimpse: 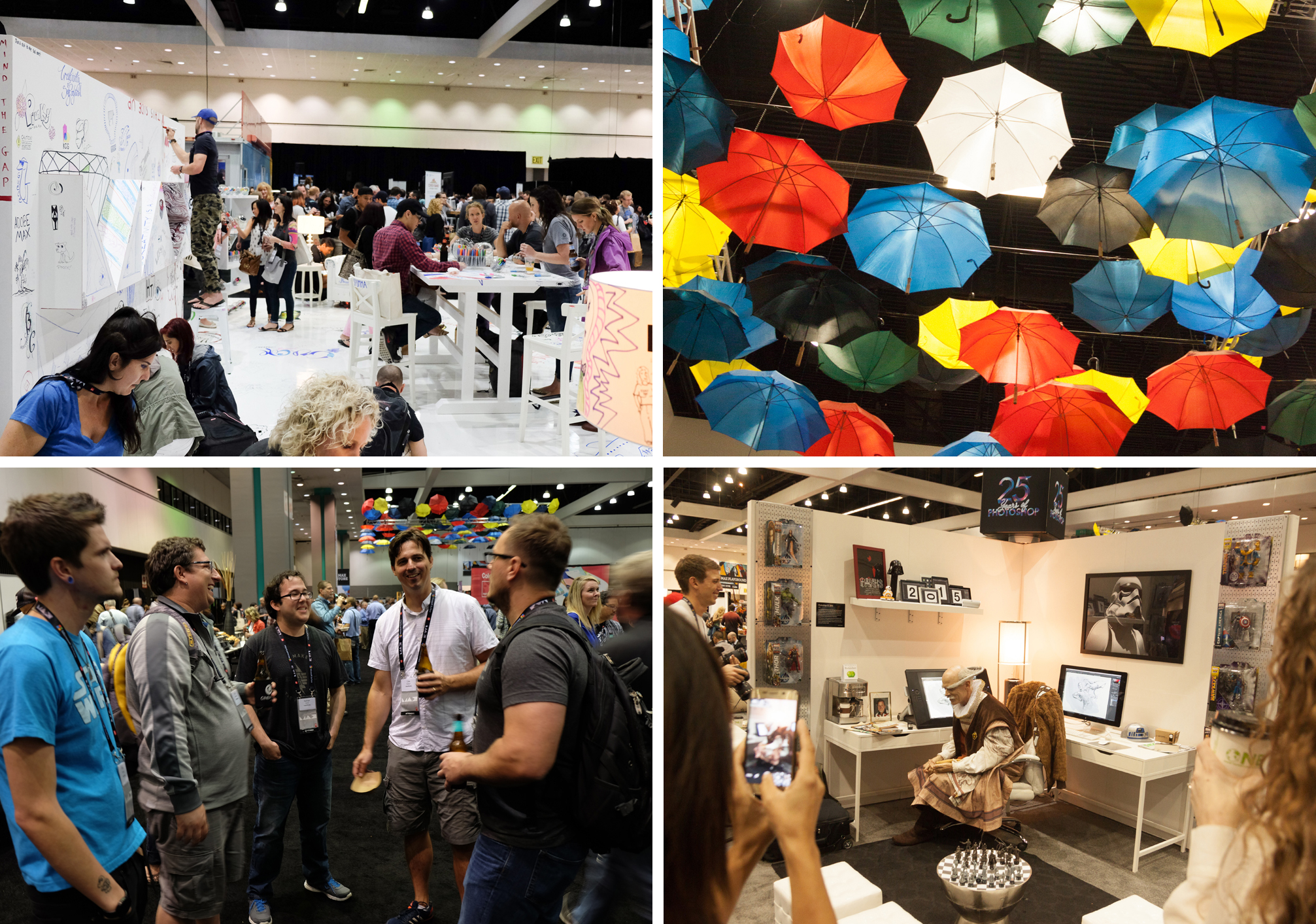 Turns out the welcome reception was just a warm up for the real part on Tuesday night: MAX Bash. More drinks. More food. Bubble dancers. Synchronized swimmers. Live music from Cage the Elephant and Fitz and the Tantrums. You get the idea. It was a massive party, and it all happened outdoors in the L.A. Live plaza. Again, pictures: 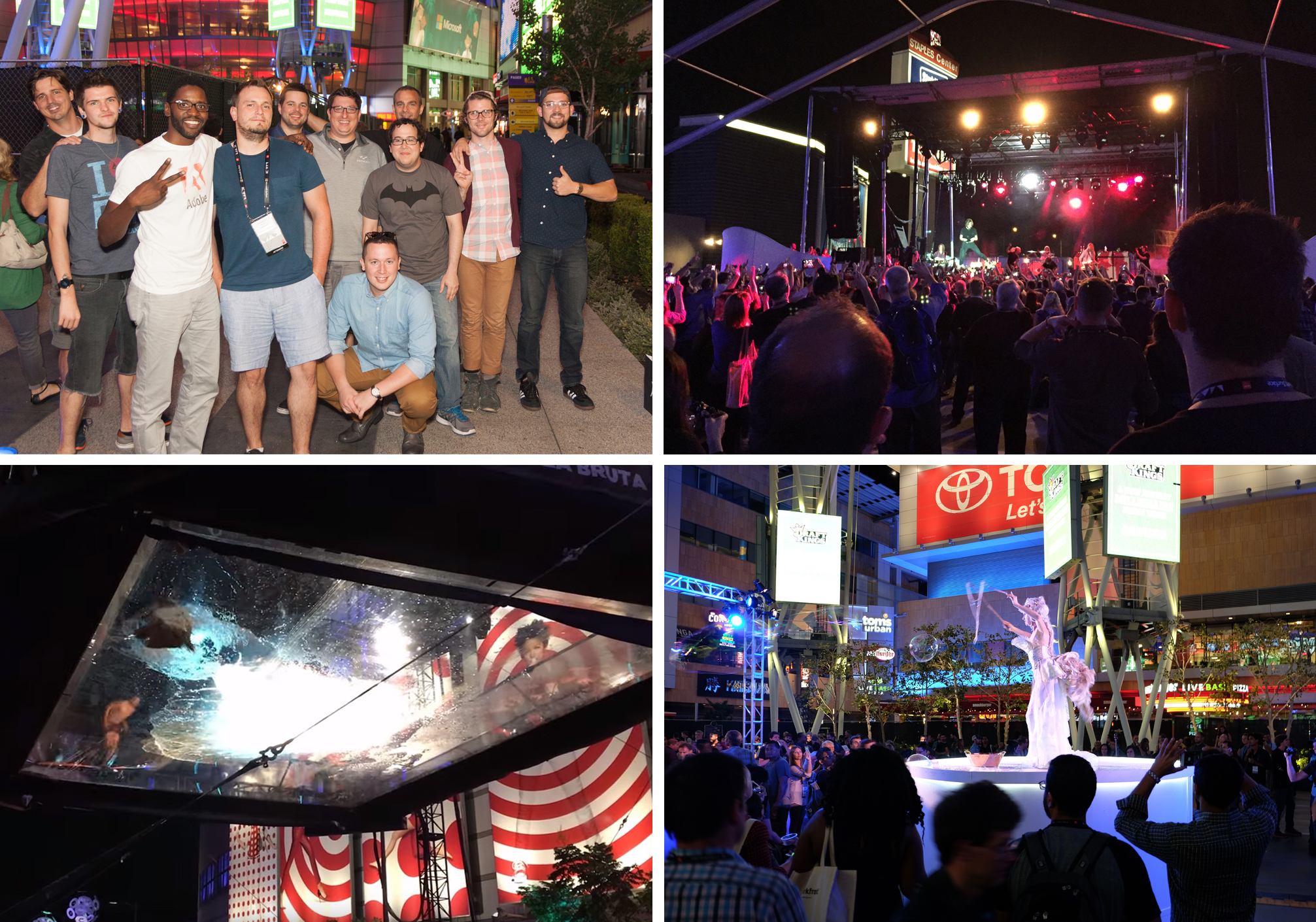 So, What Did We Learn?

It’s clear we had a great time at Adobe MAX, but what did we take away from the conference that we can use back in the real world? I asked some of my marketing brethren to share their thoughts, which is how I’ll close out this post:

“I learned the power of story in everything you do creatively and how to reinforce that through photography. Seeing your world from a different perspective and getting out of the creative rut by changing your daily routine are good ways to keep your creativity flowing. Creativity doesn’t just “hit you;” you have to seek it out and intentionally create it with deliberate effort.” – Clinton Fields.

“One thing I didn’t realize is that collaboration is built into Adobe’s apps. I also learned a ton of shortcuts and ways to streamline my workflow, and Adobe’s mobile apps allow me to start the process earlier than ever.” – Chris Armstrong

“Beyond the dozens of new Photoshop and Illustrator tips I picked up, I learned a whole lot about implementing pattern libraries, which speed up the design and development of applications and websites. That, paired with a bunch of HTML Canvas and SVG inspiration, should help with creating a more engaging web experience moving forward.” – Scott Siemens

“I would say my biggest takeaway from Adobe MAX was the experience of being around professionals who are at the top of their game, using the same tools I’m using and eating the same community breakfast as me. I realized that I have a lot more potential than I’ve been leading on. I left with more knowledge and insight into how my favorite artists and designers work, which I was able to bring back with me to my workflow, providing me efficiency, confidence and a few new tricks.” – David Duncan

For me, the biggest thing I got out of the conference was a better understanding of how my coworkers work. We already collaborate well and have an excellent workflow, but Adobe MAX provided deeper insight into the tools and skills they use to streamline their work. This new knowledge, in addition to the great bonding experience of going to a conference together, has only improved the way we all work together. That alone is worth attending a conference like Adobe MAX, and I think I speak for all of us when I say:

THANKS FOR SENDING US, INTERWORKS!

Content Manager
Twitter
LinkedIn
InterWorks Named to ‘Best Places to Work in Oklahoma’ List for 11th Year There are few honors we appreciate more than being named an excellent workplace, and that’s exactly what happened on Nov. 4 in Oklahoma ...
InterWorks Named a Snowflake Elite Tier Partner We’re proud to share some exciting news on the cloud data front: InterWorks is now a Snowflake Elite Tier Partner. What does that mean, ...