Tableau and InterWorks Set to Kick Off the Tableau 9.0 Roadshow

Tableau and InterWorks Set to Kick Off the Tableau 9.0 Roadshow

Somebody pinch us, because we can hardly believe it’s almost here – the release of Tableau 9.0! As if a slew of new features wasn’t enough to get people excited about the release, Tableau is cranking the excitement level to 11 by kicking off a nationwide Tableau 9.0 Roadshow. Naturally, we’ll be joining them every step of the way. But first, let’s talk about what’s new in Tableau 9.0.

Where to start? Tableau 9.0 certainly features some exciting new marquee features, but there are also several little updates and improvements that will make a big difference when added together.

What’s really cool about Tableau is that they actually listen to their community when planning what will be included in the next iteration of their software. Tableau 9.0 is no exception. Here are some of the most anticipated new features included in the upcoming release:

Want to study up further on what’s new in Tableau 9.0? Our team across the pond received early access and wrote up a few walkthroughs detailing some of the new features and improvements. You can take a look at those on the InterWorks EU blog.

Why is the Roadshow such a big a deal? Plain and simple, you’ll be able to get up close and personal with Tableau 9.0 before anyone else! We’re talking hands-on demos of all the sleek new features. On top of that, there will be engaging breakout sessions led by Tableau themselves, the obligatory happy hour and more networking opportunities than you can shake a stick at. Sounds pretty sweet, right? Well, it gets even sweeter.

As a Roadshow Platinum Sponsor, we’re calling shotgun for the whole trip. We’re bringing quite a bit along with us at that:

Meet Our Team of Tableau Braniacs

At each event, you can swing by our booth to talk shop with some of the sharpest minds in data. We’d love to hear how you’re using Tableau as well as how you’d like to use it in the future. Given that were just named Tableau Partner of the Year for the second year in a row, we’re confident that our team of Tableau braniacs can help you reach your data viz goals, whatever they may be! 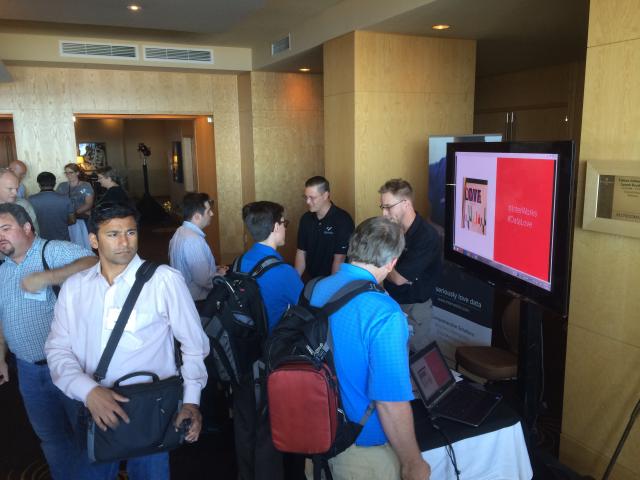 Above: The InterWorks booth at the NYC stop of last year’s Tableau 8.2 Roadshow.

See What Power Tools for Tableau Are All About

People are buzzing about Power Tools for Tableau, our suite of essential Tableau tools ideal for Tableau power users. We’ll be giving live demos of Power Tools at each event, so be sure to stop by and see what they’re all about. We think you’ll be surprised at how much easier they make complex tasks within Tableau.

This is the fun part. We’ll be giving away some pretty cool prizes at each Roadshow stop, some of which are kind of a big deal. We’d share them here, but we think it’s better if you see them in person. Plus, being mysterious is kind of fun. 🙂

Without further ado, here is the complete list of U.S. Roadshow dates and cities. Register for one near you to claim your spot!

Can’t make the Roadshow but still want help getting up to speed with Tableau 9.0? Give us a shout. We can fix you up.