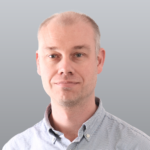 Here in InterWorks we are getting a little bit over-excited about Tableau 9.

Especially, when this blog post came out from the Tableau mothership.

Those are some pretty bold figures to put out there..

Not being one to believe everything that I’m told, I thought that maybe it would be great for someone to do their own independent testing to check on those numbers.

Step 3: Upload my 150 million row Data extract to both servers. Step 4: Create a dashboard to query the Data Source. (if you click on the image it will expand) 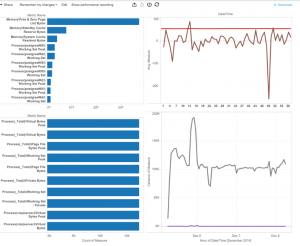 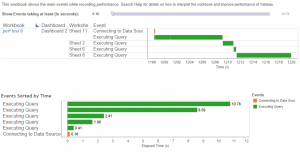 So what we have here is a pretty standard Tableau 8 dashboard performance recording, with each query happening sequentially, one after the other. The duration of the longest query came in at 10.78 seconds, with the overall duration from start to finish of around 22 seconds.

Now, let’s take a look at the same query on Tableau 9 Server 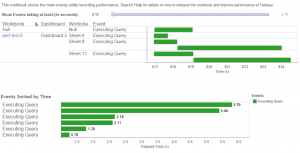 Whoa!!! So what’s happening here then?

To start with, we have much shorter query durations, with the longest query length down from 10.78 to 5.4 seconds, and we also have parallel query executions to bring the overall time down from 22 seconds to 7.5 seconds

That’s not bad at all… 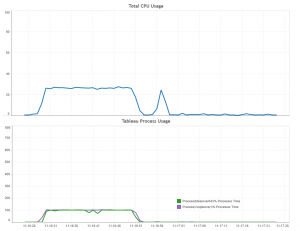 There are 2 points to notice here.

Firstly, the total processor usage never gets above 27% [blue] of what the server is capable of for the duration of the query.
Secondly, both the VizQL (vizqlserver [purple]) and Data Engine (tdeserver64 [green]) processes max out at one vCPU each.

Now let’s take a look at the Tableau 9 server.. 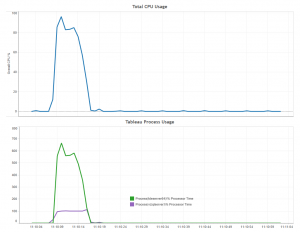 We see that again the VizQL process continues to use 1 vCPU, but now the Data Engine is multi-core, with the result that the total processor usage peaked at around 96%, and a much much shorter overall query time.

Now, I know what you’re thinking; what effect does increasing the number of cores in a server have on the overall query times?

As you’ve asked so nicely, let’s find out…

I changed the underlying image on AWS from a m3.2xlarge to a c4.4xlarge for both the Tableau 8.3 and Tableau 9 Servers.

We do see a shorter overall query time (down from 22 seconds to around 16 seconds).

But, we see the same process & processor usage profile as Tableau 8.3 running on 8 vCPU, with only one core being used for each of the VizQL and Data Engine processes.

(Note that the improved query times moving from 8 to 16 vCPU may well be due to the changes in the underlying hardware, including the use of a faster Processor.

Again, we see the parallel querying and also, and an improvement in query times, with the longest query now taking 3.34 seconds, and the overall query time down to a sparkling 4.5 seconds.

This is reflected in the performance chart, where again we see the multi-core in action. (This time peaking at just under 60% utilisation)

So what to make of all those figures…

Those are some pretty thrilling figures. They’re not quite in the same league as the Tableau Blog figures, but still interesting enough..

I guess it’s going to depend on your own dashboards, your datasets and the overall load on your Servers, as to what performance improvements you will see. Also, in this testing I don’t take into account the other features offered in Tableau 9 such as Query Caching or Query Fusion (which I haven’t gone into here, and if no-one else writes about these features, I may have to do so myself)

So overall, you are going to see great improvements in the times taken to render dashboards. This is going to make your customers happier which is going to make you happier. However, what I’m not so sure about is what effect this upgrade is going to have on your servers. There are a few unknowns out there such as;

All these are questions and more are what makes this server upgrade extremely exciting and takes Tableau 9.0 to a #WholeNewLevel. If you’re yet to download Tableau Server, or would like more information on it, please click here or feel free to shoot me a message.