A Neutral View of Super Bowl XLIX Visualized in Tableau

A Neutral View of Super Bowl XLIX Visualized in Tableau

As a Dallas Cowboys fan myself, I don’t have a horse in this race, which gave me an idea. What if I created a simple comparison between this year’s Super Bowl teams without any of the bias that come with being a fan of those teams? That’s exactly what I did, and I used Tableau to do it.

I kept this data viz simple and let the stats speak for themselves. Sometimes, simple is better. In the viz, you’ll see a head-to-head comparison of both teams in all major statistical categories. The winning team of each category is highlighted. Also included in the viz are the stat leaders for each major category – minus special teams. I think this viz is an easy way to compare key stats between each team without having to navigate back and forth between team pages on ESPN’s website.

The stats are interesting for a few reasons. First, there’s a common perception from Seattle fans that their “Legion of Boom” is on some sort of defensive pedestal, far and away better than other defense in the league. The actual numbers between their defense and the Patriots’ defense paint a slightly different picture. There are some other interesting comparisons, like rushing vs. passing and so on.

One thing is for sure, all of this will make for an interesting match up. Again, the viz isn’t the fanciest, but it gets the job done by showing side-by-side stats in a way that you can quickly understand. It also took no time at all to build. Enjoy!

Click on the image below to interact with the viz: 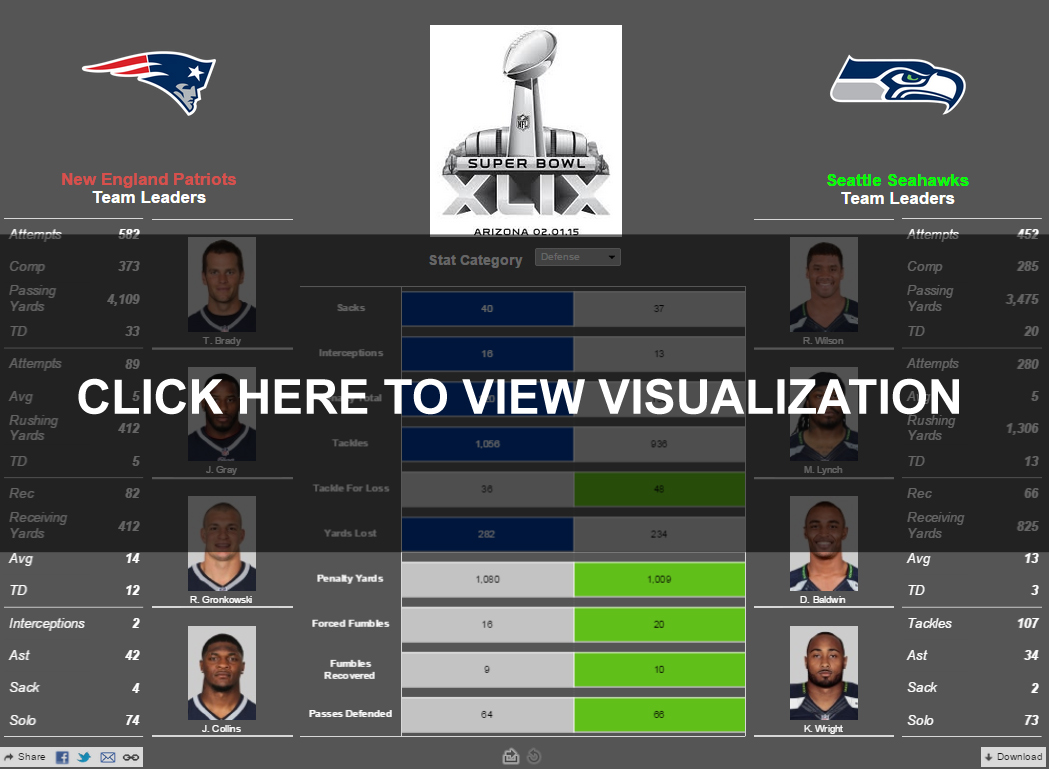 Note: The data used in this viz comes from ESPN.

BI Support Lead
Twitter
Google+
LinkedIn
Tableau Conference 2021: Devs on Stage in Review As always, the keynotes from the Tableau Conference, even virtually, are always an exciting highlight, and I love getting to write ...
Advance with Assist: Finding Max Date and More Question: I have a need to determine my Current Opportunity amount and the change from whatever date was listed prior. It could be the ...