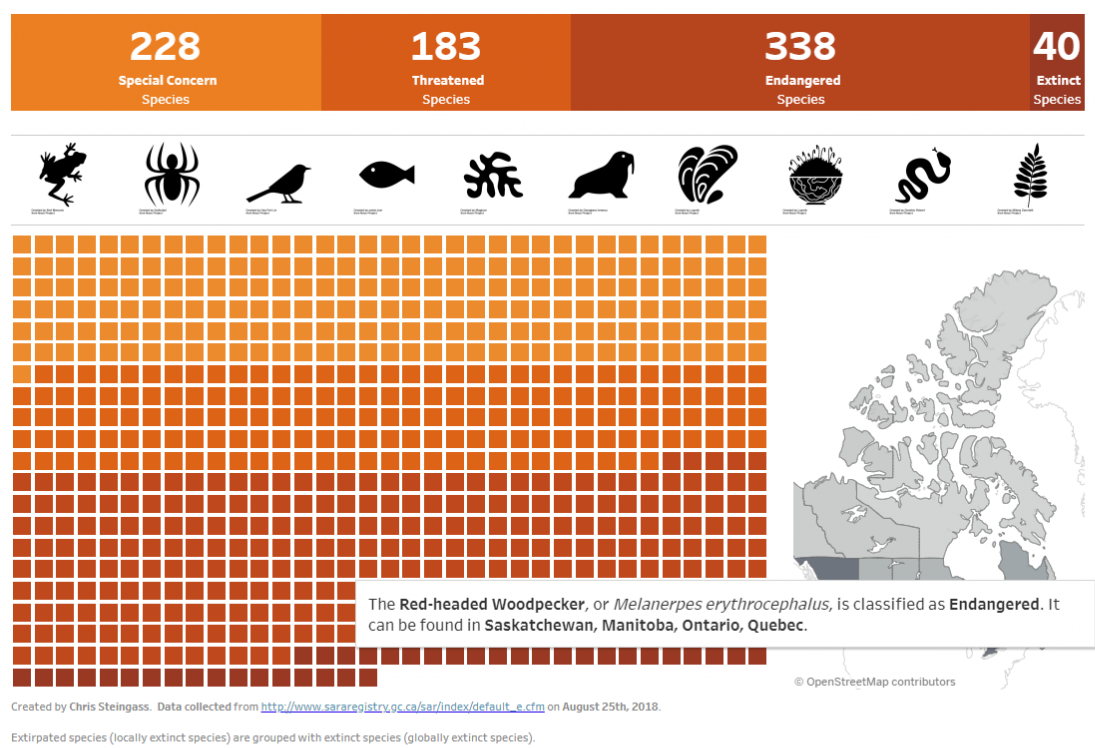 The good people over at the Species at Risk Public Registry, sararegistry.gc.ca, which is part of the Government of Canada, provide website visitors with a list of species monitored by the Ministry for the Environment and Climate Change for any changes in the sizes of their populations. The Registry contains lots of great information on various animal species spanning the spectrum from Not At Risk all the way to Extinct, but the information is largely presented in a traditional rows-and-columns format. I wanted to see if I could build something that displays the Registry’s information in a more interactive and visually engaging way. Enter Tableau.

My first step was to download the Registry’s “A to Z Species List” in its entirety. Using a small Python program, I filtered the table down to only species that are currently classified as either “special concern,” “threatened,” “endangered,” “extirpated” or “extinct.” From the original table, I also created a second data set that showed the regions or provinces inhabited by the species in a way more conducive to what I wanted to accomplish. These two data sets resulted in the visualization below.

In its current state, the visualization displays information on the species monitored by the Ministry and the regions those species tend to inhabit. The user can filter the entire view by a family of species or by a specific at-risk classification. An interesting next step would be to add time-based information, such as allowing the user to display the at-risk classification of a species over time.

Analytics Consultant
Building Signal-Based Models with Cross-Validation One challenge in building analytical models involves separating signal from noise. Signal describes the patterns we consider “real” in ...
P-Values and the Reductio Ad Unlikely Relying on p-values to reach business decisions is common, which is reason for concern. Conducting analysis that’s too heavily based on ...