InterWorks
×
Contact Us
BACK TO TEAM
Warren Sinor
Systems Engineer
Email
You know what they say: If it ain’t broke, take it apart to learn how to put it back together. That’s just what Warren did as he grew up. He’s always been passionate about technology and tinkered with computers and broken video game consoles to figure out more about them. Warren grew up in the small town of Inola, Oklahoma, where he met his wife Katie. Interested in all things computers, he moved to Tulsa to chase more knowledge, ultimately graduating from Oklahoma State University with a degree in computer science. After five years in the IT industry, Warren has worked in several positions from Support to DevOps to BI and is excited to be back in IT and use his distinct job experiences to contribute to InterWorks as a Systems Engineer.

When not working, Warren dabbles in many hobbies; you might call him a hobbies hobbyist. Whether it playing video games, adjusting his home lab, smoking meats or gardening, he loves keeping busy. When he heads outside, he enjoys hiking and spending time with his dog. 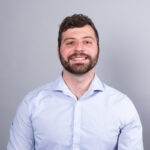