InterWorks
×
Contact Us
BACK TO TEAM
Renae Perry
Client Manager
Email
Although Renae’s journey to InterWorks has been far from predictable, she’s brought one thing with her to every stop on her path: her passion for building relationships and community. A Stillwater, Oklahoma, native, Renae earned her bachelor’s degree in vocal music education from Oklahoma State University and her master’s degree in music theory from the University of Texas at Arlington.

Upon completing her master’s, Renae served as the box office manager at The McKnight Center for the Performing Arts at Oklahoma State University during their inaugural season, which welcomed The New York Philharmonic to Stillwater in October of 2019. While working at The McKnight Center, Renae developed a passion for building strong customer relationships and exploring the possibilities of effective business intelligence and analytics. She is thrilled to pursue these passions at InterWorks.

Outside of work, you can usually find Renae at Town and Gown Community Theatre, where she directs, performs and works backstage in as many shows as they will let her. If she’s not there, she’s most likely singing in a choir or watching YouTube videos on the couch with her husband, Brian, and her miniature longhaired dachshund, Baxter.

Culture
How I Went from Music Theorist to Client Manager 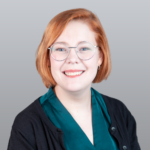