InterWorks
×
Contact Us
BACK TO TEAM
Kendall Hanson
Systems Engineer
Email
Like many people in the field, Kendall took a direct path to his career in IT – it just wasn’t in a straight line. Kendall attended Oklahoma State University, receiving a bachelor’s in theatre technology and a minor in art history.

After school, he went on to supervise the scenery shop at the University of Oklahoma’s School of Drama and served as a master carpenter for several shows at the Tony Award-winning Utah Shakespearean Festival.

This background in the arts taught him skills in process analysis and improvement, as well as troubleshooting and collaboration with people of all types while working toward a common goal with a hard deadline. It is true that the show must go on, after all.

Kendall eventually returned to Stillwater to get married and began working at OSU. After a few years, he worked his way up to supervising a small help-desk team, maintaining the servers and websites that were used by most of the departments under the VP of Administration and Finance.

Kendall came to InterWorks from a healthcare company in Oklahoma City. There, he was primarily tasked with upper-tier support of the service desk. This included upgrades of wireless networking, server virtualization and storage systems as well as the design and roll-out of an IT service-management automation system.

When he is away from the office, Kendall enjoys puttering around the garage, spending time with his family, being terrible at fantasy football and cooking large pieces of meat over smoke and fire.

IT
Quick Q&A: Why We Like RUCKUS / CommScope for Enterprise Wireless Networking 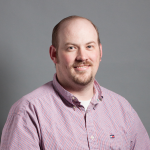