InterWorks
×
Contact Us
BACK TO TEAM
Justin Lemmon
Data Lead
Email
“If you need to find me, I’ll be blocking shots in the low post”, says Justin. He's been a sports enthusiast since birth, and his mother can be given all the credit for this since she always played softball and really raised Justin into the sports world that he loves so much. From an early age, Justin was sculpted into a diehard fan of the Texas Rangers, Dallas Cowboys, Oklahoma State Cowboys and Michael Jordan’s Bulls, and he now also gives allegiance to his hometown Thunder.

“I can’t really think of one reason I enjoy sports so much. It’s just always been in my nature, and I really enjoy analyzing the skill and strategy (or lack thereof) behind every pitch, pass and shot.” Which is probably why Justin is on intramural softball, basketball, and flag football teams, as well as a men's softball team in Oklahoma City. When he’s not on the field or court, he is probably enjoying another passion: horror films. His favorites are either zombie movies or B/C/D/F horror movies that are so bad you have to like them. 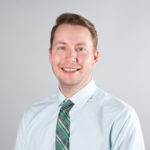