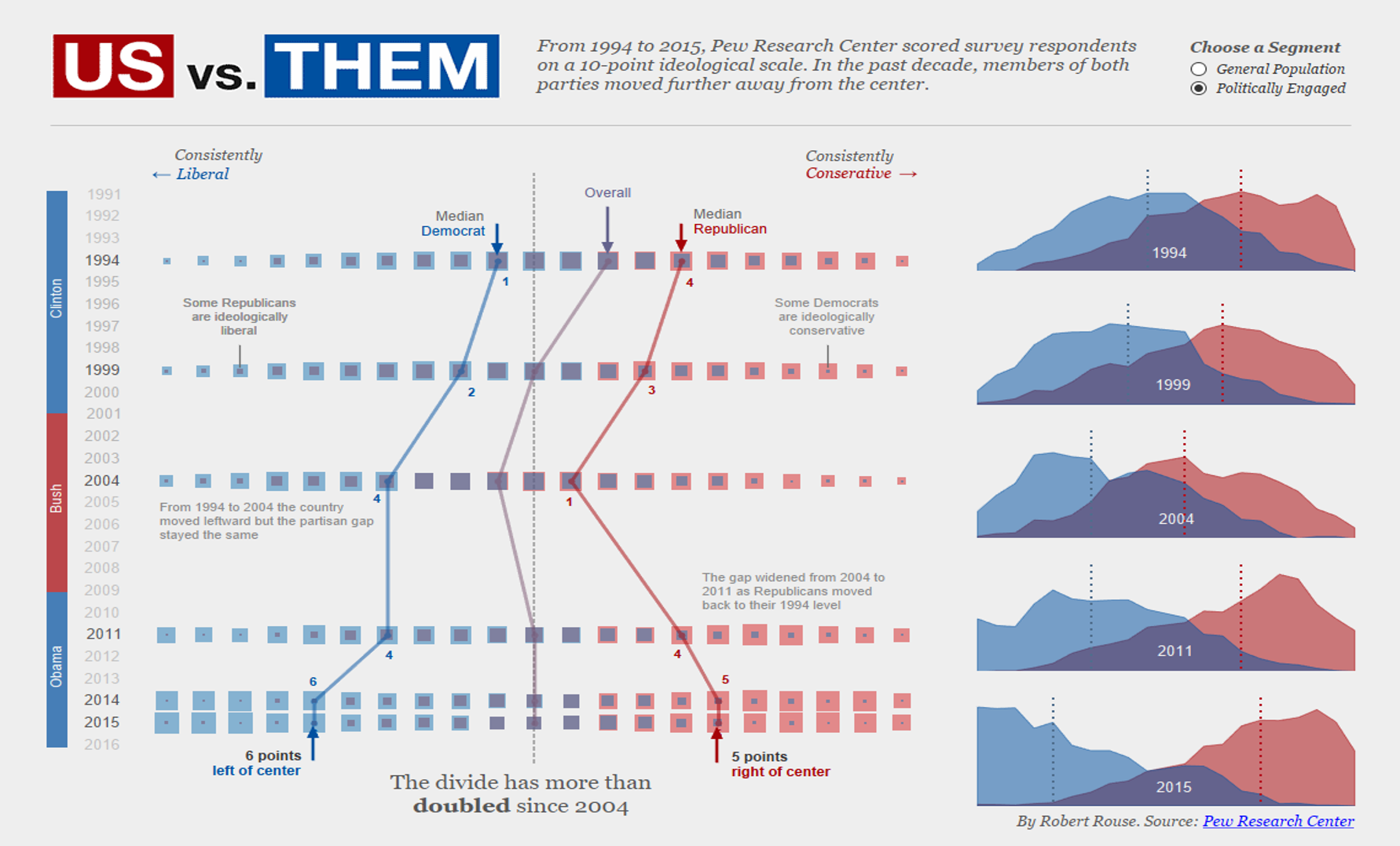 I’m the kind of person who binges on real-time charts during election nights, but not this voting season. My interest is waning because of a sense that political divisions have become deeper, less civil, and less thoughtful in recent years. Is that intuition correct, or have things always been this way?

Pew Research Center, an institution known for quality information and non-partisanism, has conducted surveys to track ideological leanings for over two decades. Using data from their Political Polarization in the American Public report and some of their visualizations as inspiration, here is my entry for Tableau’s Politics Viz Contest (if you like it, you can vote for it here):


Please note: some numbers on key issues disagree with Pew’s report by 1-3 percentage points. I replicated the weighting and calculations as closely as I could from the raw data they provide. For the most reliable numbers and analysis, please refer to their full report.

My feelings about this election cycle at first drew me to avoid the subject of American politics. Instead I sought out data on voter turnout in various countries and thought of doing some creative mapping.

First I arranged countries, not by geography, but as shapes sized by population. I researched some options for doing this in ways that wouldn’t distort the outlines and would correctly size by area. Based on a quick Tableau prototype, it looked like the result wouldn’t be worth the difficulty required.

By the time I switched to using squares instead of country outlines, the data seemed less interesting. Later I recalled a Pew study that impressed me with its smart visualizations when I saw it two years ago. It was interesting enough to remember for that long, so maybe it would be interesting enough to compete in a tough Iron Viz contest.

Design inspiration came from multiple sources: a viz on Pinellas county schools with a vertical timeline emphasizing divergence, the animated histograms from Pew’s report, and survey visualization advice from Zen Master and former Iron Viz champ Steve Wexler all played a role. Those ideas are important to the design but the details are what make me especially proud of this visualization.

Some details are only noticeable when something is “off” about them. Things stand out when colors don’t match or objects are misaligned. Minor imperfections become an annoying focal point. When they’re done right, those details fade away.

Here are some things I polished to give the dashboards a military-grade spit shine:

One major detail throughout is color. Red and blue are easy and more or less required in a viz about Republicans and Democrats. But there are still subtleties involved and reasons for not coloring everything that way.

The title is animated not only to attract attention, but to connect with people on both sides. A static image leaving “US” as red would assume a fully Republican audience. Switching colors means that “us” and “them” apply equally on either side. Elsewhere, mixing them into purple emphasizes overlap where it exists. It brings out the people who are are ideologically opposed to their own party and gives a place for those who have mixed views.

Some key issues can’t be assigned to one party or the other. For example, the majority of both parties agree with keeping or increasing social security benefits. Coloring one side red or blue would not make sense on that one. Finding neutral colors was challenging. Green means “good,” so that would bias one side of the issue. That leaves leaves orange, purple and gray palettes. I ultimately went with the colors on this New York Times viz I found via Steve Wexler.

Every color and every line mean something or help remove distractions. I hope this discussion shows why details matter. I leave it Tableau’s Iron Viz judges and the community at large to decide if I’ve focused on the right ones.