The Future of Data

The Future of Data 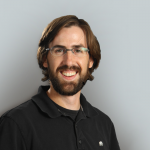 ‘The enormous multiplication of books in every branch of knowledge is one of the greatest evils of this age; since it presents one of the most serious obstacles to the acquisition of correct information by throwing in the reader’s way piles of lumber in which he must painfully grope for the scraps of useful lumber’ – Edgar Allan Poe

If you’ve been listening, you’ve likely heard: data is in. It’s a simple word, yes, but layered with a lot of confusion. Data access isn’t what it used to be. We have mounds and mounds of it sitting around, collecting dust with each passing transaction.  It gets old, stale and worth only as much as one can possibly squeeze out of it.  Alas, the most overlooked aspect of data is how its wholeness, or gestalt, is ignored. We attempt to parse every bit down to the nanosecond but we miss what, collectively, can make a fairly nice day. Put simply, we’re only seeing the trees.

‘In 2011 alone, 1.8 zettabytes (or 1.8 trillion gigabytes) of data will be created, the equivalent to every U.S. citizen writing 3 tweets per minute for 26,976 years. And over the next decade, the number of servers managing the world’s data stores will grow by ten times’ – Lucas Mearian, Computerworld 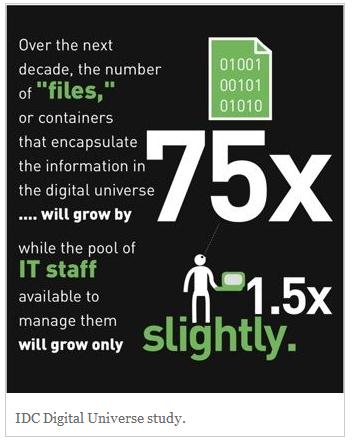 Data is piling up, amassing such a gravitational force that we all feel compelled to make sense of it, even if it means making no sense at all. It’s like Storage Wars, but in this show, the storage units are server farms.  Imagine a group of clever moguls bidding on antiquated servers, eager to uncover some digital secret. It could happen.

‘Though 75% of data today is generated by individuals, enterprises will have some liability for 80% of it at some point in its digital life. And less than one-third of all stored data today has even minimal security or protection; only about half the information that should be protected is protected at all…’ Lucas Mearian, Computerworld

So what? Well, here’s where the old companies are being left behind, too comfortable to move as quickly as some of the modern companies and, more importantly, eager individual creators (think app developers, analysts, etc.). In the past, we waited for the data to come to us. Whatever way it arrived, we had to accept it. ‘People want to do something to make the world a better place. They will help when they are invited to. Access to cheap, flexible tools removes many of the barriers to trying new things’ (Shirky, 2010). Now, with an abundance of ‘flexible tools’, we gather and sift through all the data we can possible manage and transform.

Let’s not forget, the data has always been there, waiting for its own type of Green Revolution.  But the access to that data is now wide open thanks, especially, to tools like Tableau and Tableau Public.  We’re now armed with the ability to combine multiple types of data and the willing find a new world waiting for them. A new world filled more answers, insight and analytical thought than we’ve previously experienced.

Don’t forget to check out this infographic. You never know, some of us might find some buried treasures waiting…

Business Intelligence Consultant
Facebook
Google+
LinkedIn
Monitor Your Tableau Server without the GUI If you enjoy monitoring your Tableau Server cluster by constantly refreshing the admin view (image below), this might be for you. ...
InterWorks and Facebook to Share Insights on Data Culture at 2013 Tableau Customer Conference STILLWATER, Okla. – InterWorks, Tableau Software’s largest global services provider, announced plans to present alongside Facebook ...