Twitter Ads Available to All US Businesses: Why You Should Care

Twitter Ads Available to All US Businesses: Why You Should Care

On April 30, Twitter announced that Twitter Ads will now be generally available to all US-based businesses. Previously, Twitter Ads was available by invitation only, allowing only a select number of businesses and artists to take advantage of the platform. Now any small business, or even individuals who feel so inclined, can create a Twitter Ads account and begin promoting their account, tweets or trends of interest to them.

Before I dive into why you and your business should care, I’ll give you a quick overview of Twitter Ads.

What Is Twitter Ads and How Does It Work?

In theory, Twitter Ads works a little like Google AdWords. You’re given a fancy dashboard a list of all your campaigns and an interactive graph that displays campaign performance. Twitter Ads campaigns also work off the same bidding and targeting principles as Google AdWords, with some minor tweaks.

Users bid on a set of target interests, which will be displayed to a target audience. The highest bidders will then have their advertisements displayed to that target audience. Obviously, the higher the bid, the more frequently an advertisement will be shown. Best of all, you only pay if someone engages you’re your advertisement. Each campaign has a total budget along with a daily budget. Users can limit how much they spend by controlling bid amount, daily budget and total budget respectively.

What makes Twitter Ads fundamentally different From AdWords is what you promote.

In Twitter Ads, you can promote your business in three different ways:

The first, and in my opinion, most valuable way to promote in Twitter Ads is through Promoted Accounts. Promoted Accounts allow you to target users by location, interests and followers like the ones you already have. Promoted Accounts will then appear in your targeted users’ “Who to follow” section, displayed on the left-hand side of their Twitter interface.

A Promoted Account is recognized by a small arrow in a yellow box next to the account’s display name. Here’s an example: 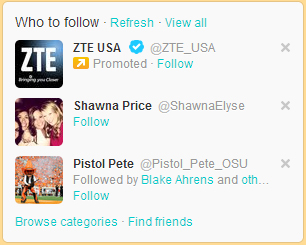 What I like so much about Promoted Accounts is that you only pay for new follows, not clicks.

Promoted Tweets have the same geo-targeting capabilities as Promoted Accounts, but reach users by keying in on target keywords in one of two ways.

Promoted Tweets can be effective, especially when it comes to promoting major events or new products. With the right mix of ingredients, they can go viral in no time. Because individual tweets have such a short shelf life, the life cycle of a Promoted Tweets campaign is usually pretty short.

If you’re on Twitter regularly, you’ve probably encountered a promoted tweet. Promoted Tweets are also denoted by a small arrow in a yellow box. The first tweet shown in the picture below is an example of a Promoted Tweet: 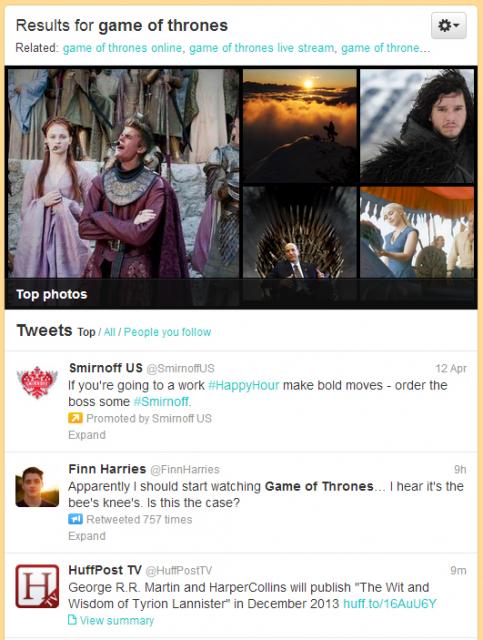 Promoted Trends essentially puts your trend at the top of Twitter’s Trend list for a day. That’s the same list that every Twitter users sees, meaning a ton of exposure. With massive exposure comes a massive price tag.

Unless you have $200,000 to burn, you probably won’t need to know much more about Promoted Trends. At any rate, here’s what a Promoted Trend looks like: 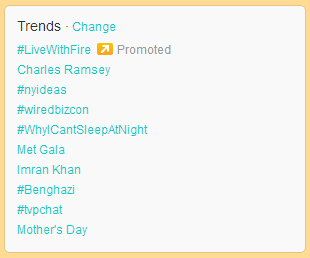 If nothing else, use Twitter Ads for its analytics capabilities.

With Twitter Ads Analytics, you gain insight into all relevant metrics concerning your Twitter account. You can discover important demographic information about all your followers such as location, interests and what other accounts they follow. You can also check out inidividual tweet metrics from both your paid and unpaid tweets to see which tweets are most succesful.

Why You Should Care

If you or your business engage in social media in any way, it’s important to consider the value that paid advertising can bring to your social media strategy. Platforms such as Twitter Ads are an expedient way to reach thousands of potential customers that would be difficult to reach otherwise. If implemented correctly, they can also be relatively inexpensive.