The Real Reasons Behind Google+ Growth.

The Real Reasons Behind Google+ Growth.

At this point, you have probably heard about the rapid growth of Google+, Google’s social media platform. Over the course of the past month, bloggers tirelessly pointed out that Google+ is growing faster than Facebook did when it was a young, upstart platform like Google+. While technically this may be true, there is a lot more to the story than numbers can tell. Everyone only talks numbers, making bold comparisons without thinking about where this growth originates.

According to an official release from Google, Google+ now has 500 million registered users, nipping right at the heels of Twitter. Having 500 million registered users does not mean a thing unless those users are active. So how many Google+ users are active? 135 million are active in the Google+ stream, meaning they regularly use the social media platform. With 135 million using Google+, Google is pretty close to Twitter in terms of active users as well, but it is still a far cry from the roughly 1.1 billion active Facebook users.

While it has not toppled Facebook, or even Twitter for that matter, having 135 million active users is still pretty impressive, especially since Google+ has only been around since August of 2011. Considering Google has spent relatively little time in the social market compared to Facebook, and to a lesser extent Twitter, Google+ has grown phenomenally in little over a year.

The question remains: what does this growth really mean? Is Google+ a game-changer in the social media world, or are there other reasons contributing to its rapid ascent in popularity?

While speculating exactly why Google+ is enjoying early Facebook-like growth can seem like a pitfall, there are several factors in the Google+ success equation that in my opinion make it a bit different from early Facebook growth. All or none of these may be true. In any case, they are certainly worth considering.

Google Knows All and Sees All

All hail the almighty Google! We all know that Google runs the internet, among a multitude of other things. With data centers in every U.S. state and the majority of countries across the world, many joke that Google knows everything about everyone.

That is because they do.

Since Google became the search engine of choice, created its own browser, successfully dominated free email, and acquired a laundry list of other companies, it was only a matter of time until they infiltrated the social media world. Given that millions are already plugged into Google, it was easy for Google to create a social media platform that seamlessly integrates with existing Google accounts. All users have to do is sign in to their Gmail accounts and they are halfway to having a functional Google+ profile.

The Socialization of the World

Before you get all Joseph McCarthy on me, let me explain. I am not referring to a “Red Dawn” situation here; I am referring to the ever increasing use of social media by people across the world. Now more than ever, social media use is practically an unconscious activity. What used to be reserved for the young or tech-savvy is now used by everyone from world leaders to your dear old Nana. When Facebook was in its early growth stages, all the world knew before it was MySpace.

Google Gives SEO Benefits to Those With Google+ Accounts

This factor has probably not contributed a whole lot to the mass success of Google+, but as an SEO it is my sworn duty to mention it. Seeing as how the Google search engine is the most widely used search engine in the world, Google gets to call the shots on SEO ranking factors. Social media influence has begun to play a part in SEO ranking factors and will only get bigger in the future. That means people and companies who are active on social media will have better SEO than those who are not. Naturally, Google made it to where Google+ has the biggest influence on SEO rankings, ahead of Facebook and Twitter.

While the growth of Google+ may come with some caveats in relation to Facebook’s early growth, it is still mighty impressive what the fledgling social media platform has achieved in such a short time. In no way am I trying to discount what they have done, but it is important to think about different reasons for growth before making bold comparisons and grandiose conclusions.

Google+ has several sharp features and its own unique pulse as a social media platform, making it well worth joining. With all its potential, Google+ could very well become the social media standard in the future. Barring some ground-breaking innovation though, it is entirely more likely that the growth of Google+ will plateau and stay in line with other social media giants like Facebook and Twitter.

The fact of the matter is that growth is different for everyone and everything. One thing is for certain though; Google+ is growing up and is now officially a contender in the social media world. That is what matters most.

Want to stay connected with InterWorks via Google+? Be sure to check out the official InterWorks Google+ page. 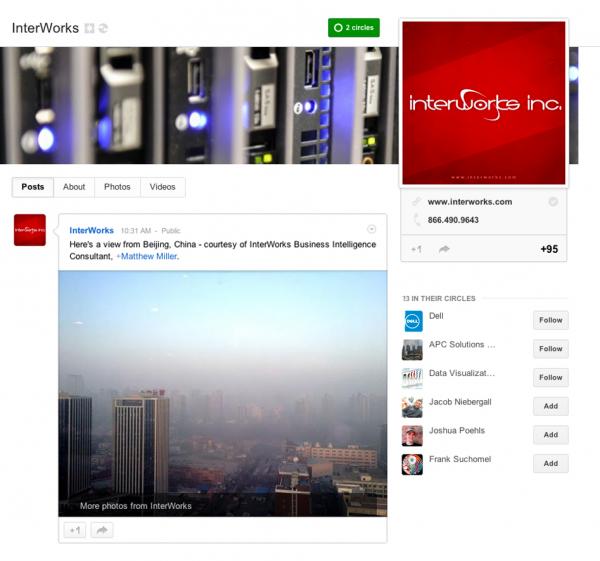