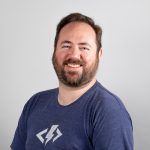 I attended the 2009 Oklahoma Oil and Gas Trade Expo yesterday with Tyler Remington, our LandBoss salesman, and Aaron Confer, our InterWorks salesman.  The expo was in the Cox Pavilion on the Oklahoma State Fair Grounds.  Lunch was catered by Head Country Barbecue, and in my opinion made the expo a success all by itself, but in addition we had the opportunity to talk to a lot of people about LandBoss as well as demo the application for them and we received quite a bit of interest.  Tyler added several leads to his list and he is excited about following up on them.  As one of the developers of LandBoss, I was interested in getting user feedback on the app and I’m excited about a few new feature ideas that I came up with as a result.

We learned a lot yesterday, not only about what people think about LandBoss, but also how to make our exhibition better and I’m looking forward to going back next year.

Software Engineer
Google+
LinkedIn
Workaround for PrimitiveExp:: MakePrimitive Caused by IFNULL and a Zero Length String in Tableau Recently, a colleague ran into an issue with the workbook that is exported from our Audit tool in our Workbook Tools product: The error ...
The 2009 Oklahoma Oil and Gas Trade Expo I attended the 2009 Oklahoma Oil and Gas Trade Expo yesterday with Tyler Remington, our LandBoss salesman, and Aaron Confer, our ...