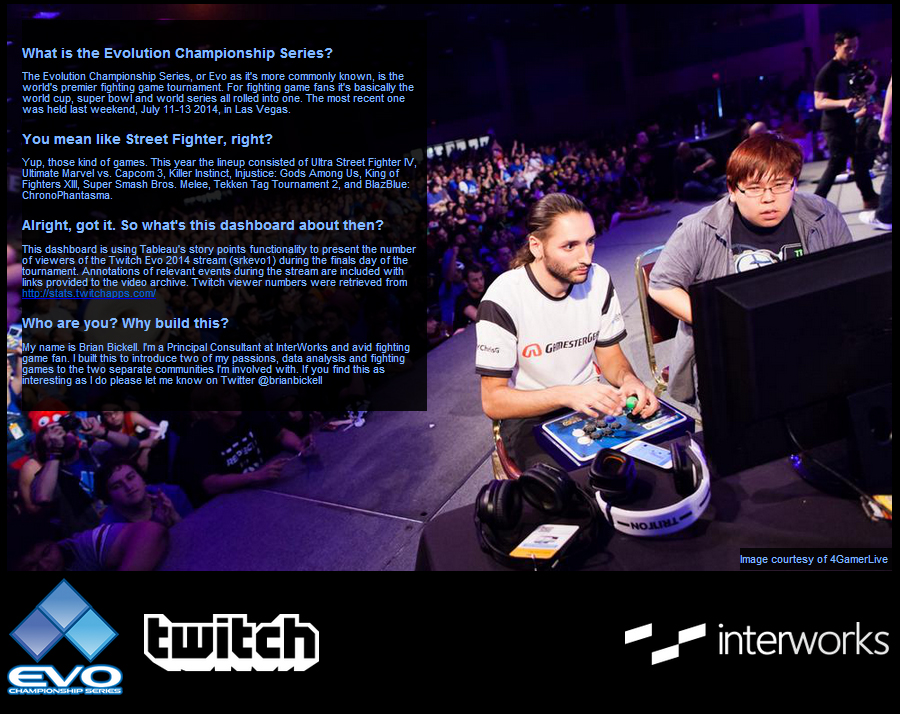 Two of my passions in life are data visualization and fighting games. These two passions haven’t overlapped a whole lot, but lately I’m finding more and more uses for data in taking my Ultra Street Fighter 4 game to the next level. Last weekend, July 11-13, was the Evolution Championship Series, more commonly known as Evo. Evo is the World Cup, Super Bowl and World Series all rolled into one for fighting game fans. To win a title at Evo is to be accepted as the best in the world. It’s a goal that everyone who plays fighting games competitively holds.

This year was an amazing Evo that drew a record-breaking number of viewers on Twitch. Since I didn’t make the trip to Las Vegas this year, I was one of those folks watching at home. When I came into work on Monday morning, after binge-watching 40+ hours of tournament matches, the first thing that I wanted to do was to look for some data to play with. After digging for a while, I managed to find some viewer count information on http://stats.twitchapps.com/. To go with that, I pulled down the tweets from the official Evolution Twitter stream (@evo2k) to correlate events in the tournament with times.

With Tableau 8.2 being fairly new, I hadn’t yet had a chance to use the new Story Points functionality on any client work. I thought I’d take it for a spin with this visualization. The result that I came up with displays the Twitch stream viewer count over time and is segmented into “chapters” of the story by which game was being played at the time. To provide context, and because I wanted an excuse to re-watch finals, I annotated key moments in the day and provided links to the Twitch archive in the tooltips.

If you didn’t catch the Evo finals on Sunday, do yourself a favor and check out some of the matches I’ve annotated. My pick: Justin Wong vs. Filipino Champ in Ultimate Marvel vs. Capcom 3 Top 8.

If you want to throw down on some games, get at me on Twitter. Also, shout-out to a Rose player finally winning Evo. Keep it real, Louffy.