InterWorks
×
Contact Us
BACK TO TEAM
Frank Suchomel
Curator Engineer
Email
While visiting museums as a young child, Frank got his artistic inspiration from the surrealist and impressionist painters. Ever since, he has been an active artist, displaying work at various galleries and performing music around the country and abroad. Rather than adhering to a specific genre, he culls from a wide range of eclectic interests.

Frank recently moved to Stillwater from Austin, TX, where for over a decade he worked as a web, software and mobile-app developer. Even though a career as a developer coincided with the rise of the internet and personal computer in the '90s, he's had an affinity for computers since coding BASIC on a Commodore Vic20 as a kid. While development and art seem to be on different ends of the spectrum, Frank finds a harmonious balance between the two. 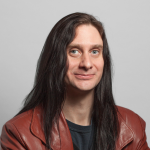 Frank Suchomel
May 21, 2012
Dev
How do I overwrite SQL generated by a View?