After a fairly recent upgrade for a client, it was reported that some downloads were getting dropped. Additionally, it was discovered that the Windows FTP client would time out and could no longer access the client’s public FTP outside the network. The FTP server was showing that a connection was trying to be established; however a connation could not be completed. Oddly enough, 3rd party FTP clients, such as FileZilla, could still access the public FTP.

One of the nice things about the Astaro firewall appliance’s/UTM’s is that a live log of a specific feature can be viewed. Since connections were dropping (note in my photo that ‘Drop silently’ is selected), I decided to take a look at the intrusion prevention. 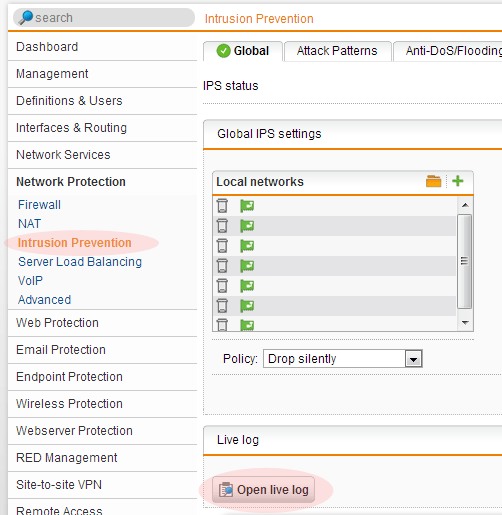 After opening up the logs and I initiated the download again. Since I did not know the IP address of the place I was trying to get my download from (SourceForge in this case), I ran an ipconfig in a command prompt so I would know what information I would need. Here is the code that was returned:

In my example, there are 3 pieces of information I care about:

Note: The ‘live log’ will not have syntax highlighting. An example has been provided below.

Before I made adjustments to any rules, I went to Snorts website to research the rule in question. In this particular case, Snort already changed their own default rules on 9/21/2012 http://www.snort.org/vrt/docs/ruleset_changelogs/2_9_3_1/changes-2012-09…

The rule will now appear as disabled in the ‘Modified rules’ list.

Note: There are occasions where certain file extension can flag several rules, however may be difficult to flush out as successive rules may not show up in the ‘live log’ until you disable the first rule that is getting flagged.