InterWorks
×
Contact Us
BACK TO TEAM
Mitch Gann
Systems Engineer
Email
A Stillwater native and graduate from Meridian Tech, Mitch first got into computers at a young age. “Ever since I was young, I have had my hand somewhere near a computer. Starting out with my single core 1 GHz, 512 MB ram computer handed down to me from my father, I never looked back.” Mitch, like a lot of InterWorks team members, also has a passion for video games. Since the age of 10, he’s played every video game that he could get a hold of. In his job at InterWorks, he says, “It’s like a night-and-day difference between doing what you love and doing what you have to. It’s just nice to come into work and know that is what you want to be doing for a living.”

Mitch considers himself a laidback and easygoing guy who likes to spend time with his two dogs: a border collie/lab mix and a rottweiler/dachshund mix. “I love to go home after a day of work, play some video games or play with my two dogs to relax and pass time.”

Oh, and if you're out and about and happen to notice a silver blur fly past you, that's likely just Mitch in his "2008 MazdaSpeed 3 | 2.3L Turbo-charged engine of sexiness. Zoom zoom." 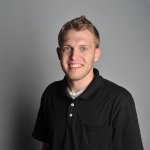