InterWorks
×
Contact Us
BACK TO TEAM
Mike Dunning
Data Architect
LinkedIn
Email
Mike joins us after having spent 16 years working in technology divisions of the investment and private banking sectors both in the UK and Switzerland. Originally starting his career as an accountant, he changed disciplines to something less hedonistic; in IT development, Mike found himself developing a raft of skills that make him an invaluable addition to the InterWorks team.

Specialising in systems analysis, database development, ETL and business analysis to name but a few of his skills, Mike’s professional passions center around databases, beautiful visualisations and empowering as many people as possible to enjoy them as much as he does.

Presumably bored of falling down the Alps and tired of the breathtaking scenery and clean living, Mike moved back to the UK and is now one of our most capable consultants. As a proud father of four, Mike has the tact of a master diplomat and the presence of a zen master, which only adds to his charms.

When not producing dashboards or being mugged by his teenage sons, Mike can be found cowering in a New Forest pub, perfecting the art of the Curry (apparently whilst listening to ABBA) and watching Formula 1. 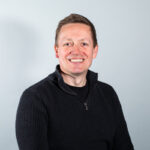