InterWorks
×
Contact Us
BACK TO TEAM
Kirsten Hoffman
Global BI Ops Manager
Facebook
Twitter
Email
Sometimes Kirsten feels like a fish out of water in Oklahoma. A native of Connecticut, she’s competed at the national level in synchronized swimming and held five varsity swimming records while competing for Marymount University. While completing her MA in survey research at UConn, she started competing in masters swim meets. In her spare time, she volunteers as the Membership Coordinator for Oklahoma Masters Swimming, coaches age group swimmers for King Marlin Swim Club and is also a USA Swimming official.

Kirsten loves that employees at InterWorks embrace the motto: Work Hard, Play Hard. The same traits that have helped her in the pool—time management, hard work and dedication—help her in coordinating the day-to-day operations of the Business Intelligence Team. She loves the fast-paced, ever-changing nature of the tech world. It’s definitely never boring.

When she’s not on the pool deck, volunteering on her local YMCA Advisory Council or with the Stillwater Public School System, she’s running around after her son and their “urban farm animals” – five chickens, four fish, two dogs and two cats. 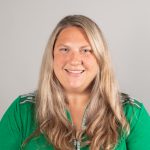