InterWorks
×
Contact Us
BACK TO TEAM
Bill Barnes
Platforms Architect
Email
Bill grew up five miles from Tinker Air Force Base in Oklahoma City. After throwing many LAN parties for Starcraft with his friends in high school, he decided to get into IT professionally. He loves getting his hands on any new gadgets that seem interesting. He’s officially been banned from bringing any more Raspberry Pis into his home. That said, he is currently working on building an arcade cabinet with his kids, though they may have to take turns playing.

When Bill’s not trying to build something new out of spare parts or on some online site preparing to explain what is coming in the mail, he loves spending time outdoors. The first step for him is to find a good, packable hammock and then drive off into the woods to find a few fish that need rescuing from the water.

Bill also spends his spare time running, speaking and attending SQL Saturdays and user groups. He tries to get embedded into every layer of IT that he can. Currently he’s been working heavily in SQL, but he keeps security as a hobby and passion.

Culture
How I Went from Government to InterWorks’ Weird Company Culture 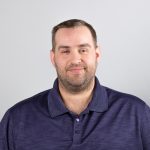