InterWorks
×
Contact Us
BACK TO TEAM
Han Zheng
Analytics Consultant
Email
Han has always preferred her computers to be on the cutting edge of tech ever since she got her first one. After a while, she began fearlessly disassembling them, and her continued curiosity in technology made studying computer science a no-brainer.

Database and network are Han’s favorite technologies, and she furthered her study in Germany, where—attracted by the culture—she came for her master's degree after completing university in China. Beginning her career in an IT department, Han soon fell in love with BI and became an analytics consultant to stay on the frontlines of BI and tech and interact with clients.

Han grew up in Fuzhou at the southeast coast of China among the sweet aromas of jasmine tea and flowers. Now, she lives in and loves Düsseldorf, as well as the sport of badminton. After work, you can find Han at the local Badminton Center, and after she’s played her heart out, she enjoys leisurely activities like reading ancient philosophy books, writing calligraphy, crocheting, sewing and cooking. 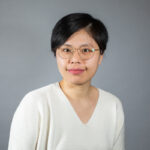